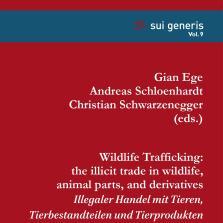 Buy book Bookmark
There is no author summary for this book yet. Authors can add summaries to their books on ScienceOpen to make them more accessible to a non-specialist audience.

Wildlife trafficking threatens the existence of many plant and animal species and accelerates the destruction of wildlife, forests, and other natural resources. It contributes to environmental degradation, destroys unique natural habitats, and deprives many countries and their populations of scarce renewable resources. The more endangered a species becomes, the greater is the commercial value that is put on the remaining specimen, thereby increasing the incentive for further illegal activities. Preventing and supressing the illegal trade in wildlife, animal parts, and plants is presently not a priority in many countries. Despite the actual and potential scale and consequences, wildlife trafficking often remains overlooked and poorly understood. Wildlife and biodiversity related policies, laws, and their enforcement have, for the most part, not kept up with the changing levels and patterns of wildlife trafficking. Poorly developed legal frameworks, weak law enforcement, prosecutorial, and judicial practices have resulted in valuable wildlife and plant resources becoming threatened. The high demand for wildlife, animal parts, plants, and plant material around the world has resulted in criminal activities on a large scale. Considerably cheaper than legally sourced material, the illegal trade in fauna and flora offers opportunities to reap significant profits. Gaps in domestic and international control regimes, difficulties in identifying illegal commodities and secondary products, along with intricate trafficking routes make it difficult to effectively curtail the trade. Although several international and non-governmental organisations have launched initiatives aimed at bringing international attention to the problem of wildlife trafficking, political commitment and operational capacity to tackle this phenomenon are not commensurate to the scale of the problem. There is, to date, no universal framework to prevent and suppress this crime type and there is a lack of critical and credible expertise and scholarship on this phenomenon. As part of their joint teaching programme on transnational organised crime, the University of Queensland, the University of Vienna, and the University of Zurich examined the topic of wildlife trafficking in a year-long research course in 20182019. Students from the three universities researched selected topics and presented their findings in academic papers, some of which have been compiled in this volume. The chapters included in this v edited book address causes, characteristics, and actors of wildlife trafficking, analyse detection methods, and explore different international and national legal frameworks.

Self URI ( Book ): https://www.carlgrossmann.com/egeschloenhardtschwarzenegger-wildlife-trafficking-the-illicit-trade-in-wildlife-animal-parts-and-derivatives/
Self URI ( Book ): http://carlgrossmann.com/?ddownload=11992
Data availability: The datasets generated during and/or analysed during the current study are available from the corresponding author on reasonable request.