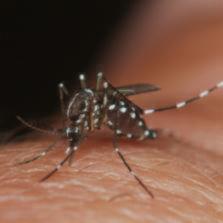 A collection of recent findings in the field of Vector Biology and associated diseases.

Recent developments in the field of Vector Biology

According to the World Health Organization, vector-borne diseases account for over 17% of the global burden of infectious diseases, with more than 1 billion people infected and over 1 million deaths annually. Many aspects influence the vector-borne disease cycle, such as climate, vector abundance and behavior, reservoir hosts like wild rodents that carry pathogens, as well as biochemical and cellular factors that allow for a microorganism to infect and survive within a vector or a host. As a result, these illnesses cannot be controlled solely through the use of drugs that target infected individuals. An integrated vector control strategy is needed to put an end to the ability of an often blood-sucking arthropod to infect a healthy host.

Within this frame, vector biologists, epidemiologists, ecologists and scientists from many areas have focused their efforts on identifying alternatives for the control of these diseases. Those include, but are not limited to, new chemical compounds to be applied as insecticides, microorganisms to be used as biological control approaches, as well as recently identified cellular and molecular events implicated in disease establishment and vectorial competence, and thus, potential targets for genetic modification. These findings and others are discussed within this ScienceOpen Collection in Vector Biology. This collection aims at helping researchers to remain up-to-date on the recent developments in the field by assembling information on a range of vector-borne diseases in one single compilation.

At present, this collection includes about 20 articles published since January 2015 to this date. They were selected for their potential as important resources for researchers in the field, for being representatives of different strategies of vector control and for the implications their findings might have in the next steps of the fight against arthropod-borne microorganisms. Importantly, I make no claim that these papers represent the most significant publications in the field. Rather, I invite researchers to comment on the results here discussed and to add other scientific articles to this series. I here also encourage fellow scientists to use this collection as an opportunity to initiate a broad discussion on the state of our research area and its needs. There is no better way to push a research field forward than by engaging in fruitful conversations and by bringing together different expertise and interests in the search for way to defeat infectious diseases.