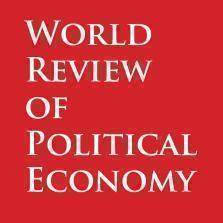 World Review of Political Economy (WRPE) is a quarterly, peer-reviewed journal, published by Pluto Journals as the official publication of the World Association for Political Economy, to produce research into Marxist political economy.

World Association for Political Economy (WAPE) has developed as a membership organization which facilitates the exchange of knowledge, new thought and research across the divide of languages and geography. Please click here to see more about joining WAPE.

World Review of Political Economy (WRPE) is a quarterly, peer-reviewed journal, published by Pluto Journals as the official publication of the World Association for Political Economy, to produce research into Marxist political economy.

World Review of Political Economy (WRPE) is a quarterly, peer-reviewed journal, published by Pluto Journals as the official publication of the World Association for Political Economy (WAPE), with the first issue having been published in 2010. This groundbreaking project is the first of its kind: a pioneering collaboration between Chinese academics and a Western progressive publisher to produce a serious periodical of Marxist political economy. The WRPE is certain to be the essential forum for dialogue, cooperation, debate, and the sharing of cutting-edge research among the leading scholars in China, the English-speaking world, and beyond. The WRPE Editorial Office is at the Academy of Marxism, Chinese Academy of Social Sciences.

In its critical approaches to analyzing the social and economic problems facing humankind, the WRPE reflects the outlook of its founding organization. The World Association for Political Economy, founded in 2004, is an international nongovernmental academic body established on an open, non-profit and voluntary basis by progressive economists and related groups from around the world. The WAPE secretariat is based at the Shanghai University of Finance and Economics. The present chairman is Distinguished Professor Enfu Cheng, director of the Center of Economic and Social Development, Chinese Academy of Social Sciences.

David M. Kotz (US), Professor at University of Massachusetts Amherst

John Bellamy Foster (US), Professor at University of Oregon, Editor of Monthly Review

David M. Kotz (US), Professor at University of Massachusetts Amherst

Thomas E. Lambert (US), Assistant Professor at University of Louisville

World Review of Political Economy (WRPE) is a peer-reviewed academic journal of Marxist Political Economy, which aims to promote the innovative research into Marxist economic theories and their practical applications to world economy, developed and undeveloped economies, capitalist and socialist economies and so on, and to benefit the development of the world and well-beings of its people. WRPE welcomes submissions in normative and empirical research including, but not limited to:

World Review of Political Economy (WRPE) accepts article submissions written in English that are original and not currently under consideration for publication by any other journal.

Articles should be original and not currently under consideration by any other publication. All contributions should be submitted to WRPE via the WRPE ScholarOne Manuscripts site (https://mc.manuscriptcentral.com/wrpe), or via “Submit a manuscript” on the WRPE ScienceOpen homepage (www.scienceopen.com/collection/wrpejournal).

For submission on ScholarOne, new users should first create an account. Once a user is logged onto the site, submissions should be made via the Author Center. Online user guides and access to a helpdesk are available on this website. Authors should prepare and upload at least two files: Title Page and Main Document. Main Document should be an anonymous complete text, in which all information identifying the author(s) should be removed in order to allow it to be sent anonymously to referees. Title Page may include article's title, author's short biography and contact information.

Please contact the Editorial Office of WRPE via wrpe@cass.org.cn  or wrpejournal@sina.com  if you have any questions.

Contributions should be formatted as A4 Microsoft Word files (Mac files must be converted), double-spaced and with ample margins. All pages, including those containing only diagrams and tables, should be numbered consecutively. Biographical information of up to 80 words should be included on the title page, indicating authors’ institutional affiliation, research area, representative writings, and email addresses.

It is the responsibility of the author to obtain permission to reproduce any illustrations that may be subject to copyright, and sources should be indicated appropriately in the accompanying captions. The use of figures (diagrams, charts, graphs) and tables should be kept to a minimum, with only essential data presented. Each should be numbered consecutively, titled, and mentioned in the main text. Tables must contain editable text. Figures should be supplied as separate *editable* files where possible (preferably in EPS, Illustrator or Excel format) and not in colour. Picture files or JPEGs are unsuitable for figures, but can be supplied for photographs if they are of good quality. Mathematical formulations should be kept to a minimum. Footnotes should be numbered consecutively. Bibliographical references should be checked for accuracy. Authors’ full addresses and other contact information including email, fax, telephone numbers, and postal address should be included in a separate A4 Microsoft Word file. One photo of the author should be provided (the first two authors’ photos, if the contribution is co-authored), which will appear in the journal on the article’s title page.

1) ARTICLES, up to 12,000 words, including an abstract of maximum 200 words describing the main arguments and conclusions, three to five key words, notes, acknowledgements, funding, and references.

2) COMMUNICATIONS, up to 8000 words, usually responses to the published articles or books of other authors.

4) ACADEMIC FRONTIERS, up to 8000 words, including conference reports, coverage of scholarly exchanges, literature review, and commentary on recent research developments.

5) FIGURE, up to 8000 words, introducing the academic career, thoughts and achievements of distinguished political economists.

To assure the integrity, dissemination, and protection against copyright infringement of published articles, the copyright in your article is assigned to Pluto Journals (in behalf of the World Association for Political Economy, the proprietor of the journal World Review of Political Economy). Your Article is defined as the final, definitive, and citable Version of Record, and includes: (a) the accepted manuscript in its final form, including the abstract, text, bibliography, and all accompanying tables, illustrations, data; and (b) any supplemental material hosted by Pluto Journals.

The Author has the right to use the article in its published form in whole or in part without revision or modification in personal compilations or other publications of your own work, and the right to expand an article into book-length form for publication, provided that the acknowledgement to the journal World Review of Political Economy is made explicit.

All authors must comply with the common publishing ethics, and warrant that their article is their own original work, which does not infringe the intellectual property rights of any other person or entity, and cannot be construed as plagiarizing any other published work, including their own previously published work. The article contains no content that is abusive, defamatory, libellous, obscene, fraudulent, nor in any way infringes the rights of others, nor is in any other way unlawful or in violation of applicable laws.

The Journal has been indexed in ESCI (Emerging Sources Citation Index, an edition of Web of Science) since 2015, and indexed in Scopus since 2018. The electronic journal is archived in Portico, and collected in JSTOR (www.jstor.org/r/pluto/wrpe)(Only from Spring 2010 issue to Spring 2021 issue), ScienceOpen, and EBSCO.

The 15th WAPE Forum will be held on 17-18 December 2021, Shanghai International Studies University, China. International participants will attend online due to COVID.

The broad theme of the conference focuses on the controversy between the two main alternative traditions in economic analysis, Political Economy and Economics. Economics (with their myopic understanding of the economy as simply market relations, neglect of social and political factors and class struggle and their almost overt support for capital against labour) has been historically proved incapable of grasping how economies work and forecast and confront competently economic crises. On the other hand, Political Economy (offering a social understanding of the economy, focusing on the sphere of production, linking economic analysis to social and political factors and to class struggle) has been more successful in comprehending the actual workings of the economy and in analyzing economic crises. However, despite their long-standing failures, Economics continue to dominate academia and policy-making centers, especially in the West. Even after the last global economic crisis and its blatant failure to foresee and to resolve it, its dominance remains unwavered as it is supported by strong vested class interests. Nevertheless, there is growing unrest within both the academia and the society with this failed dominance. Political Economy is the main approach towards which all those dissatisfied with Economics turn.

This conference aims to juxtapose Political Economy and Economics and contrast their positions on the various fields and areas of economic analysis. Within its broad theme, WAPE 2021 invites all contributions that enrich the perspective of Political Economy and expand the ground for further discussion. Indicatively but not exclusively, proposed papers can touch upon the following issues:

5. Theory of stages and periodization of capitalism

6. Theories and analyses of economic crisis

11. Marxism and the Political Economy of money and finance

12. Labour process, markets and the Political Economy of Work

13. The Political Economy of poverty and inequality

20. Political Economy of European integration and the Eurozone crisis

21. Development studies at an impasse

Publication possibilities: All accepted full papers will be considered for publication in the World Review of Political Economy (http://www.plutojournals.com/wrpe/) and the International Critical Thought (https://www.tandfonline.com/rict) after passing the peer review process.

Send a paper abstract (500 words) and your full curriculum vitae in English to wapemember@vip.163.com by 30 September 2021. Acceptance letters and instructions for registration will be sent out by 15 October 2021. The structure and the schedule of registration fees are detailed below. Full papers must be submitted by 5 December 2021.

Both individual papers and complete panels on the main theme and proposed topics are welcome. You are also welcome to propose other topics on the theme. There is also the option to apply to attend the forum without a paper.

What are the benefits of joining WAPE?

WAPE has decided to develop itself as a membership organization in order to facilitate the exchange of knowledge, new thought and research across the divide of languages and geography, and offer its members access to certain benefits. To register for the 15th WAPE Forum, you must become a WAPE member first.

Standard membership. The benefits to be a Standard Member include:

The membership fee for Standard Members is US$30 per year.

Low-income membership. Low-income Membership is a discretionary rate of US$10 for students, retired and unemployed people, and part-time workers on reduced income.

WAPE. The World Association for Political Economy, registered in Paris, is an international academic organization founded by Marxist economists and related groups around the world. The mission of WAPE is to utilize modern Marxist economics to analyze and study the world economy, reveal its laws of development, and offer policies to promote economic and social progress on the national and global levels. The last fourteen WAPE forums were successively held in Shanghai (China), Shimane (Japan), Beijing (China), Paris (France), Suzhou (China), Amherst (USA), Mexico City (Mexico), Florianopolis (Brazil) and Hanoi (Vietnam), Johannesburg (South Africa), Patiala (India), Moscow (Russia), Berlin (Germany) and Winnipeg (Canada) annually between 2006 and 2019. Participants in past WAPE forums have come from over 50 countries across Asia, Australia, Africa, Europe, and North and South America.

WRPE. The World Review of Political Economy is a peer-reviewed quarterly journal of Marxist Political Economy as the official publication of WAPE and published by Pluto Journals. For more information including types of submissions that will be considered, please go to http://www.plutojournals.com/wrpe/ and submit your articles to WRPE  via WRPE ScholarOne Manuscripts site (https://mc.manuscriptcentral.com/wrpe).

Welcome also to visit the scholars of World Association for Political Economy at Elsevier.