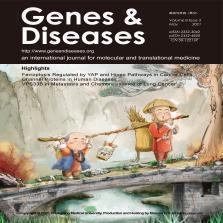 Genes & Diseases is an international journal for molecular and translational medicine. It publishes rigorously peer-reviewed and high quality original articles and authoritative reviews that focus on investigations on the molecular bases and experimental therapeutics of human diseases. Emphasis will be placed on hypothesis-driven, mechanistic studies relevant to pathogenesis and/or experimental therapeutics of human diseases.

All articles published open access will be immediately and permanently free for everyone to read, download, copy and distribute.

Allows users to copy and distribute the Article, provided this is not done for commercial purposes and further does not permit distribution of the Article if it is changed or edited in any way, and provided the user gives appropriate credit (with a link to the formal publication through the relevant DOI), provides a link to the license, and that the licensor is not represented as endorsing the use made of the work. The full details of the license are available at https://creativecommons.org/licenses/by-nc-nd/4.0/.
Note: If you need to comply with your funding body policy, you can apply for the CC BY license after your manuscript is accepted for publication.

For open access publishing, this journal uses an exclusive licensing agreement. Authors will transfer copyright to Chongqing Medical University, but will have the right to share their article in the same way permitted to third parties under the relevant user license, as well as certain scholarly usage rights.

This journal is published quarterly; March, June, September, and December.

Focus on the Primary Immunodeficiency Diseases.

Primary immunodeficiency diseases (PIDDs) are a group of the most clinically challenging diseases in children. They are heterogeneous disorders caused by inborn errors in one or more components of the immune system. With the increased awareness and applications of next generation sequencing technology in recent years, over 350 distinct disorders have been discovered. However, a large number of PIDDs are believed to be unidentified. Mechanistically, PIDDs may affect both innate immunity and/or adaptive immunity. In this special issue, the guest editors Dr. Surjit Singh, Dr. Adrian Thrasher and Dr. Xiaodong Zhao invited a panel of physician investigators to discuss the pathogenesis and clinical management of PIDDS.  Due to the impaired host defense and aberrant immunity, PIDDs clinically manifest as infections, as well as features of immune dysregulation such as autoimmunity, lymphoproliferation, autoinflammation and malignancy. In many cases, PIDDs are treatable and curable. Immunoglobulin G replacement is the cornerstone of therapy for antibody deficiency. Hematopoietic stem cell transplantation provides a cure for many forms of PIDDs. Gene therapy has also shown promising results in a couple of disorders. More efforts should be devoted to the improvement of their clinical management and newborn screening. An artistic rendition in the cover image reveals that the immune system (the umbrella and belts) of a baby may be attacked by pathogens (rains) and cause alterations at DNA level, leading to the production of defective immune cells.

Hepatocellular Carcinoma - from bench to bedside.

Professor Zhao-You Tang—celebrating his 65-year academic career in hepatic surgical oncology in China.  Professor Tang received his M.D. from Shanghai Medical College (currently Fudan University Shanghai Medical College, Shanghai, China) in 1954, and started his academic career in the Department of Surgery, Zhongshan Hospital of Fudan University Shanghai Medical College, where he has been practicing and teaching surgical oncology for 65 years. Professor Tang is an internationally renowned liver cancer investigator and a pioneer of surgical treatment of small and sub-clinical liver cancer. His scholarly accomplishments have won him international recognitions and respect by his peers in the field of liver cancer research and its surgical treatment. Professor Tang has held numerous academic and leadership roles over the years, including the President of Shanghai Medical University (1988-1994), the Vice President of the Chinese Medical Association, and a Council Member of the Union for International Cancer Control (UICC) (1990-1998). He also established the Liver Cancer Institute at Zhongshan Hospital of Fudan University and served as the inaugural director of the Institute. Professor Tang has published numerous original papers on liver cancer and edited several highly popular textbooks in Chinese and English, such as Primary Liver Cancer (1981 and the English Edition in 1989), Contemporary Oncology (1993), and Subclinical Liver Cancer (1985).  His distinguished achievement and outstanding contributions have won him numerous distinctions, including an election to the Chinese Academy of Engineering (CAE) (1994), and the selection as an honorary fellow of the American Surgical Association (2005) and Japan Surgical Society (2007), respectively. To celebrate Professor Tang’s 65-year career in academic medicine, we compiled this special issue on liver cancer, which were contributed by several of his trainees, and guest edited by Dr. Yong Liao of Chongqing Medical University, Chongqing, China. The cartoonish cover image illustrates Professor Tang’s role in medical education and patient care, as well as in inspiring new generations of liver cancer researchers and clinicians.

Coronavirus is the common name for Coronaviridae, which consists of  a large group of animal viruses and is organized in two sub-families, 5 genera, 26 sub-genera, and 46 species. Coronaviruses are enveloped, positive-sense, single-stranded RNA viruses and can infect amphibians, birds, and mammals. Human coronaviruses were first identified in the mid-1960s. Most people commonly get infected with human coronaviruses 229E, NL63, OC43, and HKU1, while sometimes coronaviruses that infect animals can evolve and infect humans and become a new human coronavirus, such as SARS-CoV and MERS-CoV. With very little warning, a major outbreak of the COVID-19 pandemic is caused by the novel coronavirus SARS-CoV-2 infection. In this issue, several articles documented the clinical and immunological characteristics, and potential therapeutics or vaccines of COVID-19. Nonetheless, our understanding about the exact pathogenic mechanism of COVID-19 is limited so SARS-CoV-2 coronavirus remains as elusive as a ghost. We can only hope the anti-COVID-19 researchers worldwide act as the Chinese mythological figure, ZHONG KUI, whose virtuoso is to catch and destroy ghosts, as depicted in the cover.

Colorectal cancer (CRC) is one of the most common types of cancer and poses a formidable challenge to global public health. CRC incidence rates are approximately 3-fold higher in the developed countries than that in the developing countries. Fortunately, CRC represents one of the best understood human malignancies as the molecular genetic events such as mutations and epigenetic modifications contributing to the multi-step tumorigenesis process have been reasonably well elucidated. Nonetheless, genomewide large-scale analyses indicate CRC is highly heterogeneous with different pathological and genetic signatures. It is critical to identify and characterize sets of biomarkers for various molecular subtypes in order to select effective therapy regimen since “one drug fits all’ model may not work for the patients who even display similar pathological changes. In this issue, Singh MT et al overviewed the molecular subtypes of CRC based on its underlying molecular and genomic alterations. Using prognostic biomarkers along with pathological staging, molecular subtypes-based therapies should offer a new framework for targeted and personalized therapies in clinical settings. As implied in one of the famous Chinese legends of the Three Kingdoms, the Shuo Kingdom Prime Minister Liu Bei was saved by a precision shooting of a Chinese polearm (or halberd) from the Han Dynasty Warrior Lv Bu as illustrated in the cover image. It is conceivable that CRC patients receiving immune checkpoint blockade therapy and other chemotherapies with a special emphasis on CRC molecular subtypes should attain better clinical outcomes, and thus are greatly benefited from precision oncology. (Illustration credits: Huijie Zhang, PhD and Qiushi Wang. )

Ferroptosis is a novel form of iron-dependent programmed cell death (PCD) characterized by mitochondria shrinkage, membrane content condensation, and the accumulation of lipid peroxidation. While the importance and disease relevance of ferroptosis is gaining recognition, much remains unknown about various genetic and non-genetic determinants of ferroptosis.  In this issue, Drs. Tianai Sun and Jen-Tsan Chi provided an overview about the roles of YAP and Hippo pathways in regulating ferroptosis in cancer cells. The evolutionarily-conserved Hippo pathway exerts potent tumor suppression effect.  Its dysregulation contributes to apoptosis evasion, tumorigenesis, cancer metastasis, and the development of treatment resistance, through an aberrant activation of the downstream co-activators YAP/TAZ. Ferroptosis and apoptosis are regulated by the cellular contact and density through the Hippo and YAP/TAZ pathways. YAP/TAZ activation under low cell density confers apoptosis resistance and renders cancer cells sensitivity to ferroptosis. On the contrary, under high cell density with extensive cell-cell contacts, activated Hippo signaling degrades YAP/TAZ and retains them cytosolically, leading to apoptosis activation but ferroptosis inhibition.  Thus, the balanced regulation of Hippo and YAP/TAZ activities may determine the cell fate committed to ferroptosis vs. apoptosis.   It is conceivable that ferroptosis induction may have therapeutic potential to treat YAP/TAZ-activated chemoresistant and metastatic cancers. The cover image illustrates how delicately the front (e.g., upstream HIPPO) and rear (e.g., downstream YAP) Buddhist monks coordinate on uneven ground may determine how much water (e.g., ion supply pool) will be left in the barrel (e.g., cancer cells), leading to ferroptosis vs. apoptosis.  (Illustration credits: Huijie Zhang, PhD and Zijian Qu. )