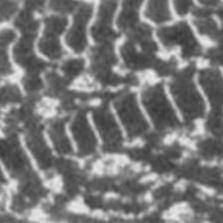 The methods were conceived in the 1960s, and there have been several periods of active research over the intervening decades. The performance of current SEMs makes the method an attractive alternative to TEM for routine diffraction contrast imaging and characterisation of lattice defects in crystalline samples.

The collection is will grow over the next months - please get in touch with other papers to add.

Electron channelling contrast imaging (ECCI) on modern FEG-SEM instruments allows for the routine imaging of lattice defects close to the surface of bulk specimens.  The development of the methodology since its inception in the 1960s is outlined in another editorial ‘Historical Development of Electron Channelling Contrast Imaging’.  This early work established that the relatively low contrast levels coupled with a need for both good spatial resolution and limited convergence of the incident beam meant that a Schottky FEG SEM was required.  Widespread availability of such instruments, their ease of use, and the advantages of using bulk samples makes the method very attractive and competitive with TEM diffraction contrast in many cases.

The notes below attempt pick-out some of the contributions that have attracted my attention – this by no means an exhaustive list (there are other fine examples in the ECCI collection at ScienceOpen).

Picard et al (2007, 2008), Twigg et al (2010) – using a highly tilted sample and forescatter detector geometry compatible with EBSD studies they imaged atomic step terraces and threading dislocation structures on CVD grown 4H-SiC.  Diffraction conditions were inferred from changes in image intensities and contrast as the sample was tilted with orientation measured by EBSD.  Particularly striking images were presented of atomic steps in spiral morphologies expanding out from central screw dislocations which are thought to act as sources for steps required for two-dimension step-flow homoepitaxial growth.

Naresh-Kumar et al (2012) – the Strathclyde group implemented beam rocking so as to acquire ECP from small regions on an FEI Sirion FEG-SEM using non-standard configuration of the electron optics,  The sample was tilted from 30° to 70° and images collected using a purpose built forescatter detector system.  Comparing images of the same dislocations imaged under differing diffraction conditions allowed screw, mixed and edge dislocations to be distinguished.

Carnevale et al (2014) - ECCI used to image lattice defects including threading dislocations, misfit dislocations, and stacking faults, in heteroepitaxially grown samples of GaP on Si.  Low magnification imaging in FEI Sirion FEG-SEM used to generate crude ECP allowing diffraction condition to be set.  A near normal incidence geometry was used with a conventional annular BSE detector at the pole piece.  The utility of ECCI in covering large areas was exploited to show the significant variation in misfit dislocation distribution across the width of the entire sample grown on a 4” Si substrate.

Yan et al (2015) – use of ECCI to image threading dislocations and ‘meandering loop’ structures of antiphase boundaries in La0.7Sr0.3MnO3 thin films on (110)-oriented SrTiO3.  Striking contrast is seen at the APBs which is consistent with a displacement vector R=½[001]LSM.

Yaung et al (2016) – use of ECCI to quantify threading dislocation densities in various GaAsyP1−y/Si1−xGex structures for solar cell applications.  ECCI observations made at near normal incidence using an annular BSE detector at the pole piece with ECP generated by low magnification imaging used to control diffraction conditions.  Direct comparison of ECCI with EBIC imaging and defect sensitive etching is presented.

Vilalta-Clemente et al (2017) – ECCI and HR-EBSD used to investigate threading dislocations in InXAl1-XN/AlN/GaN high electron mobility transistor (HEMT) structures grown by MOVPE with X nominally 20%.  Effects of different substrates SiC and sapphire on defect density were assessed.  ECCI images of the same region under different (but unknown, as surface roughness prohibited ECP collection) allowed pure edge dislocations to be distinguished from screw and mixed types and their densities to be determined.  Assessment of dislocation densities from lattice curvature measured by HR-EBSD gave further constraint and allowed densities to be established for pure edge, pure scree and mixed threading dislocations.  Densities were markedly lower for the SiC substrate.

Applications to Metals and Alloys:

Ahmed et al (1997), Ahmed et al (1999), and Ahmed et al (2001) – a series of papers using ECCI in a JEOL SEM with LaB6 source to image dislocation substructure in Cu single crystals after cyclic deformation.  Near normal incidence geometry and an annular BSE detector at the pole piece were used.  Striking images of self-organised patterning in the dislocation structures including vein and PSB ladder-like structures.  Compared to TEM diffraction contrast the spatial resolution is very limited but the advantages of using bulk specimens included intermittent observations of the same sample at different points through its cyclic life to show evolution of the dislocation structure, observations over large areas, and examination of structures close to extrusions, intrusions and cracks.

Yamasaki et al (2015) – amazing work by a group at Kyushu University combining FIB serial sectioning with ECCI to capture three dimensional details of dislocation structures.  The slice thickness of 10 nm was chosen to be smaller than the depth to which dislocations were visible so as to aid registration of the stack of 33 images.  The method was used to reconstruct the 3D dislocation substructure in a Ni-based alloy after creep deformation to ~1.5% strain.

Monsour et al (2015), Ben Saada et al (2017) – present some detailed analysis of (very) low angle boundaries combining EBSD mapping of crystal misorientations and ECCI imaging of the discrete dislocations making up the sub-grain boundary.  The 2015 work examines an 0.13° boundary in an Fe-Si steel using ECCI to determine the nature and spacing of individual dislocations in the boundary array using g·b=0 and g·bxu=0 criteria and compare this to quantification of the boundary misorientation.  The 2017 work gives some beautiful ECCI images of more complex dislocation arrays at grain boundaries in UO2 after high temperature creep deformation.  EBSD gave overall statistics on grain and sub-grain sizes while ECCI was used for more detailed of selected examples.

Ram et al (2016) – using ECCI (along with EBSD) to study effects of pre-existing low angle boundaries on the creep deformation of single crystal Ni-based superalloy.  ECCI was instrumental in demonstrating that these low angle boundaries were not the sources of dislocations dominating plastic creep even at relatively small strains (~0.1%).  Instead rapid avalanches and dislocation multiplication away from the boundaries gives a drastic and rapid increase in dislocation density.

Wang et al (2018) – Examination of dislocation structures in Nb single crystals, for use as superconducting radio frequency (SRF) cavities, after a selection of heat treatments and deformation.  ECCI at near normal incidence using an annular BSE detector at the pole piece, and employing SA-ECP through beam rocking to establish well-controlled diffraction conditions.

Dunlap et al (2018) – Study of dislocations near spherical-conical nanoindents in Ta which makes careful quantitative comparison of direct observations via ECCI and GND density estimates from HR-EBSD mapping.  ECCI at near normal incidence using an annular BSE detector at the pole piece, and employing SA-ECP through beam rocking to establish well-controlled diffraction conditions.

Electron channelling patterns (ECPs) and electron channelling contrast images (ECCIs) were conceived in the 1960s.  Since then there have been several periods of research activity, over the intervening decades, trying to improve and exploit the methods.  In the current generation of FEG-SEMs this work has reached fruition as ECCI is capable of routinely imaging lattice defect structures that are so important in controlling properties in structural and functional materials alike.

ECP show the variation of electron signal (typically the back scattered electron intensity) with incident beam direction.  These were first reported by Coates (1967) who had been observing large single crystalline semiconductor samples and noted bands of bright contrast linked to the sample alignment rather than position.  Coates established many of the properties of these Kikuchi-like reflections, but a much more complete theoretical description was given by Booker et al (1967) using the Bloch wave based dynamical diffraction theory that had recently been used to explain many effects in transmission electron microscopy.  There had been good discussion between the two groups prior to publication as a pair of linked papers.  It was clear to the Oxford group that the effect implied that much more might be done and predicted that ‘It is only necessary to orientate the crystal at the Bragg position and the local bending of the crystallographic planes where the dislocations emerge at the surface should produce the necessary contrast.’  This accurately describes the ECCI technique but it has taken decades to realise the technique reliably.  The notes below attempt to pick-out some of the key contributions along the way.

Joy, Newbury & Davidson (1982) – A review of ECP covering physics of pattern formation, electron optics and some applications.  The comparison of different strategies for forming ECP with good spatial resolution and angular acuity is a particular highlight and may be of interest to those trying to implement ECP on modern microscopes.

van Essen & Schulson (1969) and van Essen, Schulson & Donaghay (1970) – description of the most successful method for generating selected area electron channelling patterns (SA-ECP). This uses the deflection-focus strategy in which the lower scan coils are switched off and the focusing action of the objective brings the beam back to a focal point on axis after deflection by the upper scan coils.

Clarke & Howie (1971), and Spencer & Humphreys (1980) – two beam dynamical diffraction simulations of ECP contrast profiles and dislocation and stacking fault ECCI intensity profiles.  Image contrast forms, along with necessary control of sample alignment and requirements for beam diameter and divergence are all given.  The conclusion is that a high brightness instrument is required to realise ECCI of dislocations in practice and that FEG-SEMs might just be able to do this.

Morin et al (1979) and Morin et al (1979) – ground breaking experiments demonstrating that good images of individual dislocation lines and stacking faults near the surface of bulk samples can be obtained in a FEG-SEM.  The instrument ran at 45 keV for increased brightness and a concentric spherical grid retarding-field filter used to detect low-loss electrons to increase contrast and signal to noise ratio.  SA-ECP were used to control diffraction conditions and dislocation in Si were imaged under a variety of reflections.

Czernuszka et al (1990) – returned to the ECCI method after a significant pause in research in this area.  They reported experimental imaging of dislocations using a VG STEM in reflection mode at high energy (100 keV).  They used a tilted sample geometry and with a BSE detector positioned at low take-off angle.  Images were obtained without recourse to a complex retarding field detector.

Crimp & Simkin (1999), and Crimp et al (2001) – showed that a fairly conventional geometry of near normal incidence and an annular BSE detector at the pole piece could be used to image dislocations.  The work showed the advantage of higher currents, and better signal to noise achievable in a SEM with a Schottky thermal FEG.  Demonstration that the g.b=g.bxu=0 invisibility criterion works for ECCI and can be used to determine dislocation Burgers vectors.
[Crimp became interested in ECCI while on sabbatical in Oxford and implemented his own activity on returning to MSU.]