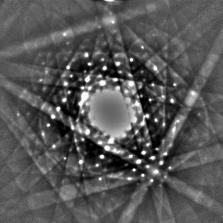 Collection of papers relating to development and application of TKD

This collection contains papers describing the development and application of the Transmission Kikuchi Diffraction (TKD) technique.

TKD is a scanning electron microscope (SEM) based technique allowing measurement and mapping of crystal phase, orientation and misorientation in crystalline samples at a spatial resolution significantly finer than for conventional EBSD.  The method necessitates the use of a thin electron transparent foil, which is mounted at near normal incidence and at relatively short working distance so that it is above the EBSD detector which then records the transmitted electron diffraction pattern.  The detector screen can be either by near vertical in the standard EBSD geometry (off-axis configuration), or placed directly below the sample with the screen horizontal (on-axis configuration).

The technique has been adopted relatively quickly by groups across the globe due to the wide availability EBSD systems and familiarity with the analysis procedures and data that can be generated.  This coupled with the improved spatial resolution has made the technique attractive with a low barrier to getting started, especially in labs with existing expertise in making thin foils for TEM work.  It has already found wide ranging applications in analysis of structural and functional material systems.

This collection is intended to be an inclusive list of contributions in the field of transmission Kikuchi diffraction and related imaging methods in the SEM.  Please get in touch if you feel there are additional papers which could usefully be added to this collection (even if you are an author).  I hope the collection is useful to some – if it is please let you colleagues know.

The first mention of Transmission Kikuchi Diffraction as an SEM-based method appeared in the literature in 2010, so the method is now a decade old.  TKD is a scanning electron microscope (SEM) based diffraction technique that is related to and has evolved from electron backscatter diffraction (EBSD).  EBSD became a mainstream materials characterization technique as the analysis process became automated during the 1990’s.  TKD is a more recent development and like EBSD allows measurement and mapping of crystal phase, orientation, misorientation and strain in crystalline samples.  Its advantage over conventional EBSD is in the significantly finer spatial resolution that can be achieved, but this is at the cost of having to prepare thin electron transparent foils.

The list below picks out some of the significant contributions to this field, focussing on technique rather than the materials science, or earth science being enabled:

Geiss, Keller and Read (2010) – discovery of the TKD method is attributed to the NIST (Boulder) group and this extended abstract (for M&M2010 conference) appears to be the first report in the literature.  TKD patterns from ultrathin films, nanowires and nanoparticles suspended on carbon films are presented.  Measurements from domains as small as 10 nm were possible, and mapping using existing EBSD analysis software is evidenced.

Keller and Geiss (2012) – the follow-up paper from the NIST group adding more detail to the initial report above.  Again examples are given of good quality TKD patterns which contain features seen in EBSD patterns.  Monte Carlo calculations (within the continuous slowing approximation) are also used to discuss the much narrower energy spread for transmitted compared to backscattered electrons.  [This paper uses the name Transmission-EBSD for the technique but the TKD has emerged as the preferred name].

Trimby (2012) – Trimby was quick to explore this new method giving impressive maps from nanostructured, highly deformed metallic samples.  He showed that for specific sample atomic number, and beam energy there is significant variation in TKD pattern quality with sample thickness indicating that beam energy and sample thickness combination should be tuned for optimal results.  The improved spatial resolution was confirmed with the absolute spatial resolution reported as 5–10 nm for Ni, while deconvolution of pattern overlap allowed an effective spatial resolution of ~2 nm to be achieved.

Suzuki (2013) – Nice assessment of how sample height, sample thickness, sample tilt and microscope beam energy affect the quality of TKD patterns and maps obtained with a standard EBSD detector geometry (off-axis).  Makes for a very useful guide to practicalities in setting up a TKD experiment.  Also clear demonstration that TKD patterns a generated near the exit face of the sample.

Fundenberger et al (2015) – extended abstract (for M&M2015 conference) describing a neat adaptation to a conventional EBSD detector which flips the screen to a horizontal position and uses mirror at 45° to bring light into the optical path of an otherwise normal EBSD detector system.  This allows the detector to be place directly below the sample in an on-axis geometry which minimises the effects of gnomonic distortion (which can be severe in off-axis TKD).

Fundenberger et al (2016) – a fuller paper describing the on-axis TKD configuration and giving some initial results obtained with it, including example patterns, and maps.  Good example of spatial resolution achievable by mapping across thin γ lamellae in α2/γ TiAl.

Yuan et al (2016) – a direct comparison of off-axis and on-axis TKD mapping of a high pressure tube twisting generated ultrafine grain structured Al-Mn alloy.  The most striking result is that the increased signal levels for the on-axis geometry lead to a factor of ~20 reduction in the required scan times compared to the off-axis geometry with same incident beam conditions.  Thus faster scans with reduced drift and contamination issues, or lower beam currents for reduced dose in beam sensitive systems can be readily achieved.

Bastos-Fanta et al (2018) – a contribution from the DTU group demonstrating on-axis TKD work in combination with in situ heating using a MEMS-based heating system generating temperatures up to 1000°C.  Good TKD patterns and maps of are shown including examples taken at temperatures up to 900°C (above this the melting point of the gold sample limited the data rather than MEMS sample heater or TKD detector).  This opens up possibilities of many lines of in situ studies.

Bhattacharya et al (2019) – use of TKD on extraction replicas to map nano-precipitates from a steel sample.  Off-axis TKD geometry was employed and multiple carbide and nitride phases distinguished and mapped in the carbon replicas.  Good statistics were achievable with particle sizes down to ~20 nm mapped.  Crystallographic information from TKD was combined with chemical analysis via EDX.

Yu et al (2019) – It is also possible to use the cross-correlation based analysis of HR-EBSD (see HR-EBSD collection) with patterns obtained in the TKD geometry.  Here the off-axis configuration is used and the combined high angular, and high spatial resolution used to map the lattice strain and rotation fields around a dislocation line.  HR-TKD is also possible with the on-axis geometry (Tang et al 2019).