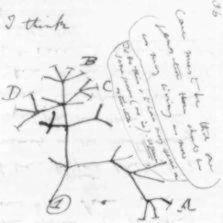 Evolution and the cell

Genotype to phenotype, and back again

Evolution is intimately linked to biology at the cellular scale- evolutionary processes act on the very genetic material that is carried and faithfully propagated by cells. However, in practice, the fields of evolutionary biology and cell biology are often separated by what can seem like an unbridgeable chasm. Take the simplest cell we know of to date: the Syn 3.0 “minimal cell” recently derived from Mycoplasma mycoides through an iterative build-and-test cycle, culminating in a 531 kb genome encoding 473 protein-coding genes [1]. The resulting 473 proteins interact with each other, the genome, and the cellular milieu in incredibly complex ways to allow the cell to grow, produce energy, replicate its DNA, respond to the environment, and divide. Despite the massive strides taken by modern cell biology, we still understand little of the minimal cellular interactome- 149 of the 473 Syn 3.0 genes encode proteins with absolutely no known function. The statistics on gene function are not very different for the human genome [2]. Perhaps it is not surprising that evolutionary biologists and cell biologists eye each other from opposite sides of the yawning gulf between genotype and phenotype with little more than the occasional holler.

Unfortunately, this disconnect means that evolutionary biology and comparative genomics studies sometimes make little or no attempt to integrate mechanistic knowledge about cells into their models; similarly, cell biologists frequently assign function to genes and proteins based on experiments in a single species or cell type without considering evolutionary trajectories. References to evolution are often made lightly, buried in the discussion section of a cell biology paper, and a gene or regulatory motif is deemed important only if it is conserved in traditional model systems like Drosophila or S. cerevisiae. This view is ultimately a distorted one, in the absence of an appreciation for the relevant species relationships, or the changes in sequence, function and network architecture that occur on evolutionary timescales- even for the most highly conserved segments of the genome.

What is evolutionary cell biology, then?  Lynch and colleagues [3] provided a recent definition that I paraphrase here: a comprehensive synthesis of the two fields in which evolutionary processes are given a mechanistic, cellular basis, and cell biology is constrained and informed by an evolutionary perspective.

The plunging costs of genome-scale sequencing, advances in metagenomic sampling techniques, and the resulting profusion of newly sequenced prokaryotic and eukaryotic genomes, have expanded our understanding of the evolutionary history and extant natural diversity of life on earth. These advances have been mirrored by developments in evolutionary theory, and better analytical tools for comparative genomics- from ortholog prediction [4] to the ancestral reconstruction of ancient proteins [5,6]. On the other hand, the rise of “omics” technologies, advances in light and super-resolution microscopy, and the advent of relatively facile genome engineering enable single research groups to carry out experiments in multiple model systems, and even to rationally select and develop novel model systems on reasonable (5 year) timescales.

Despite the fact that evolutionary cell biology is a young field, at least in its current incarnation, pioneering studies already span a striking range of cellular scales and evolutionary distances. Some of the early papers in this collection use inferred evolutionary trajectories, ancestral reconstruction, and expression in trans to understand, variously: the de novo evolution of function in a young gene [7]; the rewiring of transcriptional networks; and the role of historical contingency [8] and neutral evolution [9] in shaping the evolutionary history of protein complexes. Other studies address evolutionary processes that shaped the physical and regulatory architecture of cells, such as those driving the evolution of the endomembrane trafficking network [10], the primary cilium [11], or major morphological transitions like eukaryogenesis [12] and multicellularity [13]. Still others use comparative genomics and cell biology as a way to identify core regulatory circuitry, characterize species-specific rewiring [14], and to predict novel cellular functions in key species of interest [15].

It is no mean feat to bridge two highly developed fields that have remained separate for most of their history, however fast the boundaries might be dissolving. I believe the articles collected here showcase an exciting mix of computational and experimental approaches combined with an appreciation of both evolutionary theory and cell biology at different scales- I look forward to finding out if you feel the same way.