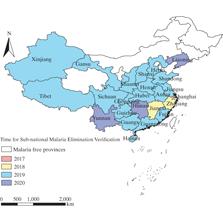 Malaria was once one of the most severe public health problems in China. However, after 70 years of integrated interventions, substantial progress has been made, and remarkable milestones have been met in malaria elimination in China. On June 30th, 2021, China was officially certified as a malaria-free country by the World Health Organization. This paper highlights the achievements of, and lessons learned from the malaria elimination programme.

Currently, the world still faces great challenges in fighting against the scourge of malaria. In 2019, 87 countries reported a total of 229 million malaria cases worldwide, representing an increase of 1 million cases over the previous year, while the number of malaria deaths reached 409,000 [1]. Malaria was one of the most important public health problems, and it severely affected human health and economic and social development for approximately 4,000 years in China’s history. Since 1949, China has strived to eliminate malaria. The national malaria control and elimination programmes were classified primarily into five phases: the key-point investigation and control phase (1949–1959), the severe epidemic control phase (1960–1979), the incidence reduction phase (1980–1999), the control achievement consolidation phase (2000–2009), and the elimination phase (2010–2020) (Table 1) [2,3]. Owing to the integrated strategies and interventions, indigenous malaria cases and malaria endemic areas have been sharply reduced [4]. The National Malaria Elimination Action Plan (2010–2020) (NMEAP) was initiated in 2010, with the goal of eliminating malaria nationwide by the end of 2020 [5]. The plan has made great progress, and all 24 endemic provinces, including 258 endemic prefectures and 2,158 endemic counties, have completed malaria verification as scheduled (Fig. 1). On June 30th, 2021, the World Health Organization (WHO) formally declared that China has been awarded a malaria-free certification.

Evolution of the national malaria control and elimination programme and corresponding strategies in China.

*Because imported malaria cases were predominant during the elimination phase, the real malaria incidence cannot be estimated. 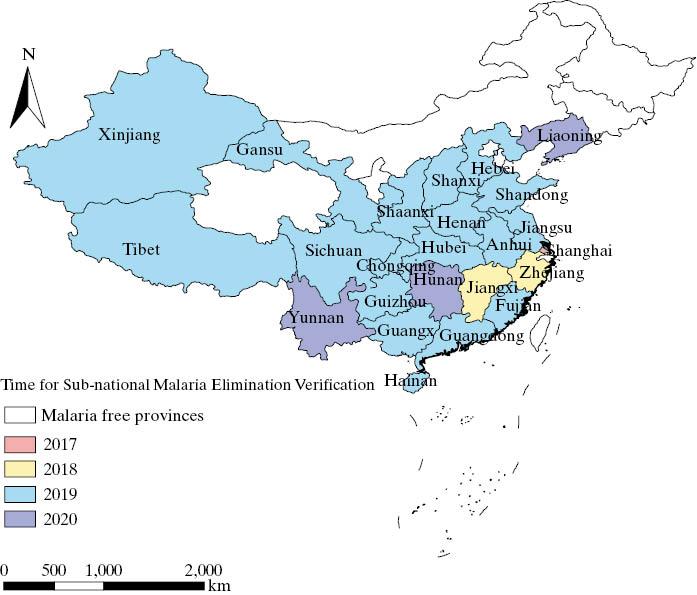 During the 70 years of the battle against malaria, various integrated interventions have been used for malaria elimination under the principle of government leadership, multi-sectoral cooperation, and whole-society mobilization. The main achievements were as follows. First, the goal of malaria elimination nationwide was achieved as scheduled. After nearly 70 years of concerted efforts, a milestone of zero indigenous malaria cases was achieved across China for the first time in 2017 [2,6,7]; since then, no indigenous cases have been reported to date, thus meeting the national malaria elimination criteria set by the WHO. Second, the burden of malaria morbidity and mortality has fallen sharply. Before 1949, approximately 30 million malaria cases were reported in China annually, and the malaria mortality rate was approximately 1% [8]. As many as 1,829 counties (more than 70% of all counties in the country) were identified as endemic for malaria in China in the early 1950s [9]. Two large-scale outbreaks occurred in China in the early 1960s and early 1970s. The peak was in 1970, with more than 24 million malaria cases nationwide, including 21.98 million reported in the Huanghuai Plain region. By 2010, however, the number of reported malaria cases decreased to 7,855 and accounted for only 0.23% of the total number of reported infectious diseases [10]. Moreover, the number of indigenous malaria cases decreased from 1,308 in 2011 to 0 in 2017 (and has remained at zero since then) [11,12]. The number of deaths with malaria has decreased from an annual mean of 2,653 cases in the 1950s to 41 cases annually in the 2000s, and decreased to a mean of 17 cases per year by the 2010s. After 2010, all deaths due to malaria were imported cases [13]. Third, malaria elimination has promoted the country’s overall social and economic development. The overall control of malaria epidemics has greatly reduced the disease burden of the entire population, enhanced public health system, and decreased the population’s poverty caused by malaria in China. The prevention of a return to poverty due to malaria has also effectively ensured the health of the labor force.

In general, several main factors contribute to the success of malaria control and elimination in China. First, strong governmental leadership is essential. The central government developed a series of documents providing substantial guidance to help public health staff adopt appropriate technical strategies and measures to respond to malaria epidemics or outbreaks. Moreover, adequate funding support has demonstrated the strong political will in eliminating malaria. Since 2010, the central and provincial governments and the Global Fund against HIV/AIDS, Tuberculosis and Malaria have invested a total of 1.38 billion Chinese yuan as special funds to support the national malaria elimination programme at all levels. The regional and inter-sectoral collaboration called the Five Provinces Malaria Joint Control and Prevention Mechanism in central China (Jiangsu, Anhui, Shandong, Hubei, and Henan) was established in 1973, and Southern Three Provinces Malaria Joint Control and Prevention (Guangdong, Guangxi, and Hainan) was launched in 1992 [14,15]. Since 2017, 24 pre-endemic provinces have been divided into four Joint Regions. The regional collaboration mechanism has further enhanced the sharing of timely information and experience in managing the mobile population, and has improved the case management and foci response capacity of medical staff, thereby facilitating malaria elimination. Second, the case-based surveillance and response system has been crucial for malaria control and elimination. The case surveillance system in China has undergone an extensive transition. Malaria case reports were made monthly and delivered by local post between 1950 and 1985, or by telephone or other electronic means between 1985 and 2003; in 2004, reports were made in real time via the Infectious Diseases Information Reporting System [16]. An additional reporting system, the National Information Management System for Malaria, was established in 2011, in line with the transition from the control to the elimination phase, with the aims of ensuring prompt investigation and detection of each case, administration of appropriate treatment, and prevention of transmission re-establishment. This system was adopted to monitor and document cases within the time frame indicators by using the 1-3-7 approach [17], which has been demonstrated to be successful and may serve as a model for other countries [18,19]. Third, capacity building is crucial in malaria control and elimination. Annual training workshops have been organized and performed in China, including malaria detection at ports, malaria diagnosis and treatment at medical institutions, and epidemiological investigation and foci disposal at CDCs. Meanwhile, on-site technical guidance and technology competitions were conducted to help maintain and update the skills of professional staff. A total of 24 reference laboratories for malaria diagnosis in pre-endemic provinces have been established. To support laboratory quality assurance measures for malaria diagnosis, at least one microscopist in each province of China has obtained WHO competency certifications. Fourth, science and technology have greatly supported malaria control and elimination. Basic science research and field studies have focused on strategies and key technologies, including pathogen biology, vector biology, diagnostics, antimalarial drugs, and control strategies. The timely transformation and application of those research results have clearly advanced science and technology for malaria control and elimination. Finally, global cooperation and information sharing is essential to promote malaria control and elimination in other countries. For example, since 2010, to reduce the malaria burden at the China-Myanmar border, local CDC staff on both sides of the border have conducted joint control and prevention activities, particularly information sharing regarding border-specific mobile population management and surveillance systems [20]. Moreover, China has initiated cooperative efforts in malaria control with countries in Africa and Southeast Asia, under the framework of the Belt and Road initiative. The China-UK-Tanzania malaria pilot project has aimed to improve malaria diagnosis, reporting, treatment, and tracking on the basis of the 1-3-7 approach and surveillance systems, and has explored a 1,7-mRCTR model for effectively reducing local malaria disease burden. This is one example of integrating the knowledge and lessons learned from the malaria control and elimination programme in pilot areas [21,22]. Through international cooperation, the goal of malaria elimination can be achieved in other countries and regions.

In summary, China has achieved great success with the malaria elimination programme and has been awarded a malaria-free certification by the WHO in 2021. China’s active engagement and contributions to regional malaria elimination initiatives have helped promote malaria elimination efforts in neighboring countries where malaria remains a severe public health problem. Building on its 2021 milestone of malaria-free certification and sustainable national efforts, the country will adopt appropriate strategies and interventions to prevent the re-establishment of malaria transmission and assist highly endemic countries in their malaria control and elimination efforts by sharing China’s experiences and products produced from the national malaria elimination programme. Our ultimate goal is to build a global community with a shared future public health and safety.

We thank all staff in the provincial CDCs in China.

COMPETING INTERESTS The authors declare that they have no competing interests.

This is an open access article distributed under the terms of the Creative Commons Attribution License (CC BY) 4.0, which permits unrestricted use, distribution and reproduction in any medium, provided the original author and source are credited.