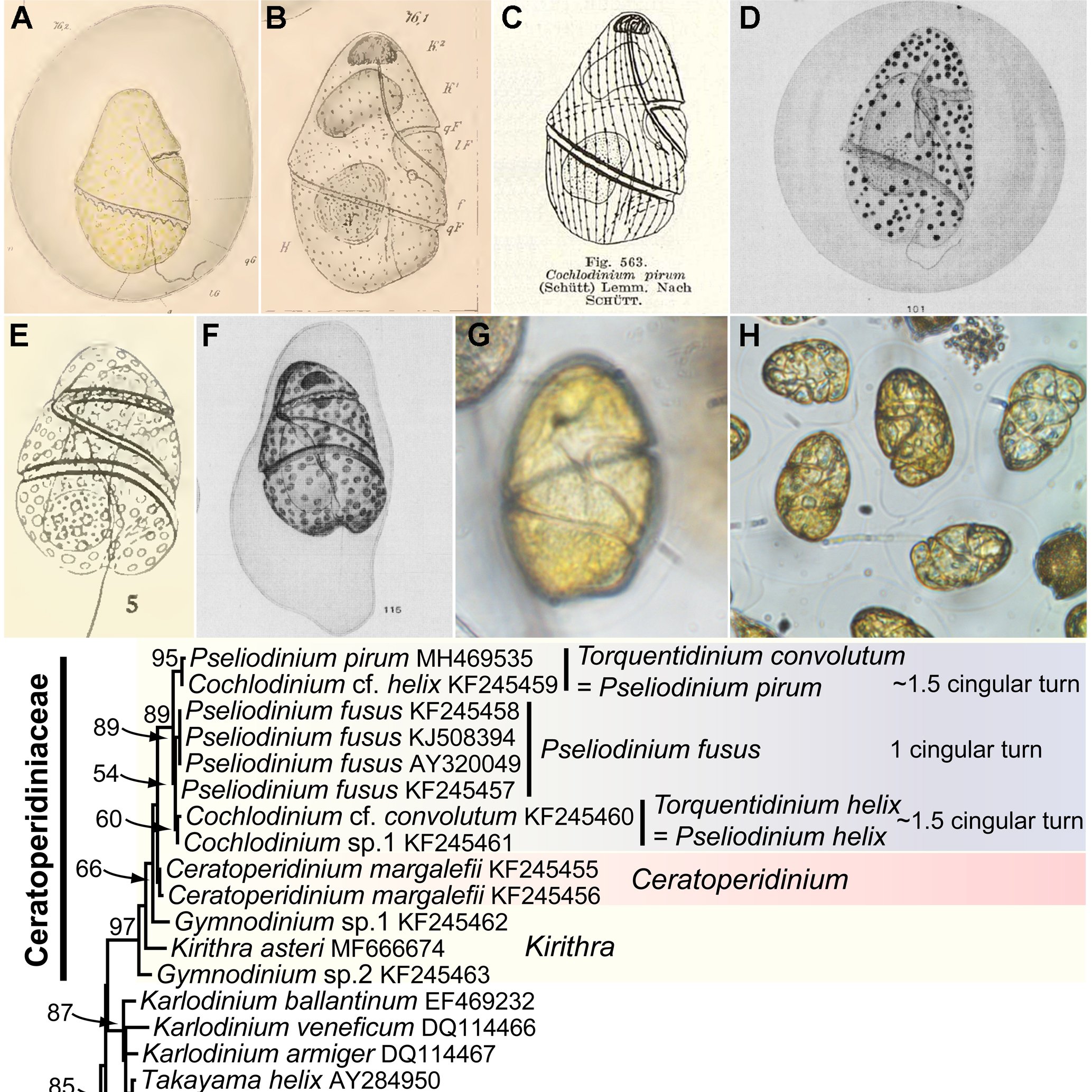 Fernando Gomez (2019)
New genera of unarmoured dinoflagellates represented by a single or very few species have largely increased in the last two decades. An example is the new genus name Torquentidium H.H. Shin, Z. Li, K.W. Lee & Matsuoka 2019 (Shin et al. , Eur. J. Phycol . 54: 249-262) recently proposed for species that were transferred into Pseliodinium in 2018. The SSU- and LSU rRNA gene sequences of the type species of Pseliodinium and Torquentidium only differed by 0.3% and 2%, respectively, and they clustered together as a monophyletic group with high support. Based on these tree topologies and/or the sequence divergences, each dinoflagellate species would be classified in its own genus. The morphological character proposed to distinguish Pseliodinium and Torquentidium is that the cingulum encircled the cell 1 and 1.5 times, respectively. This kind of arbitrary numeric morphometric character, proposed one century ago, is currently considered invalid for the generic split of unarmoured dinoflagellates. For example, Polykrikos geminatum (with ~1.5 cingular turns) clusters between species of Polykrikos (1 turn). Within the Ceratoperidiniaceae, the arrangement of the amphiesmal vesicles in apical structure complex was used for distinction at the genus level (i.e., Kirithra ), while this character is identical for Pseliodinium and Torquentidium . For the first time, an unarmoured dinoflagellate genus contains species with smooth cell covering ( T. convolutum , T. helix ) and species with longitudinal striae ( T. pirum ). However, the original description as Gymnodinium pirum in 1895 erroneously illustrated two distinct species, and since then nobody has ever reported surface markings in T. pirum . The morphological and molecular criteria used for the split of Torquentidium from Pseliodinium are unsupported, contributing to the excessive proliferation of monotypic genera. Torquentidium pirum and T. convolutum are synonyms, and Torquentidium is a superfluous generic name and junior synonym of Pseliodinium .

0 comments Cited 0 times    Rated -3 of 5. – based on 3 reviews
Preprint
Bookmark
DOI:: 10.14293/S2199-1006.1.SOR-LIFE.APWN5AK.v1.RVAZFI
License:
This work has been published open access under Creative Commons Attribution License CC BY 4.0, which permits unrestricted use, distribution, and reproduction in any medium, provided the original work is properly cited. Conditions, terms of use and publishing policy can be found at www.scienceopen.com.
Keywords: Cochlodinium,Dinoflagellata,dinoflagellate,Dinophyceae,Gymnodinium,taxonomy,Gyrodinium,Pseliodinium,Torquentidium,molecular phylogenetics

The arguments made in the manuscript about the synonym relationship between Pseliodinium (Gomez 2018) and the newly proposed genus Torquentidium (Shin et al. 2019) are well supported and convincing. This includes the unreliability (or even unsuitability) of the displacement of cigulum and the small difference found as well as the phylogenetic affiliation in the tight cluster.

Naked dinoflagellates have posed a great challenge for taxonomy, but the rapid advances in analysis tools, particularly DNA sequencing, has ushered in a flourish era of taxonomy. It is nice to see increasing resolution of previously ambiguous or confusing lineages. But I would, following the point that this manuscript is making, encourage cautions in erecting new taxa without complete information incorporating morphological and molecular analyses as well as ecological attributes. In so doing, a coherent genetic distance measure should be attempted, although a measure suitable for one lineage may not apply to another. Nomenclature should be given greater reservation too. Taxonomy should aim to be helpful for ecologists and other groups of biologists.

Meanwhile, I suggest Dr. Gomez to tighten languages and tones in the manuscript to stay objective and cool. And the title can be more focused on the particular genera of interest.