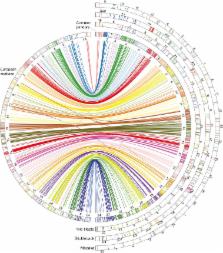 Common pandora ( Pagellus erythrinus) is a benthopelagic marine fish belonging to the teleost family Sparidae, and a newly recruited species in Mediterranean aquaculture. The paucity of genetic information relating to sparids, despite their growing economic value for aquaculture, provides the impetus for exploring the genomics of this fish group. Genomic tool development, such as genetic linkage maps provision, lays the groundwork for linking genotype to phenotype, allowing fine-mapping of loci responsible for beneficial traits. In this study, we applied ddRAD methodology to identify polymorphic markers in a full-sib family of common pandora. Employing the Illumina MiSeq platform, we sampled and sequenced a size-selected genomic fraction of 99 individuals, which led to the identification of 920 polymorphic loci. Downstream mapping analysis resulted in the construction of 24 robust linkage groups, corresponding to the karyotype of the species. The common pandora linkage map showed varying degrees of conserved synteny with four other teleost genomes, namely the European seabass ( Dicentrarchus labrax), Nile tilapia ( Oreochromis niloticus), stickleback ( Gasterosteus aculeatus), and medaka ( Oryzias latipes), suggesting a conserved genomic evolution in Sparidae. Our work exploits the possibilities of genotyping by sequencing to gain novel insights into genome structure and evolution. Such information will boost the study of cultured species and will set the foundation for a deeper understanding of the complex evolutionary history of teleosts.

2b-RAD: a simple and flexible method for genome-wide genotyping.

Eli Meyer,  Shi Wang,  John K McKay … (2012)
We describe 2b-RAD, a streamlined restriction site-associated DNA (RAD) genotyping method based on sequencing the uniform fragments produced by type IIB restriction endonucleases. Well-studied accessions of Arabidopsis thaliana were genotyped to validate the method's accuracy and to demonstrate fine-tuning of marker density as needed. The simplicity of the 2b-RAD protocol makes it particularly suitable for high-throughput genotyping as required for linkage mapping and profiling genetic variation in natural populations.