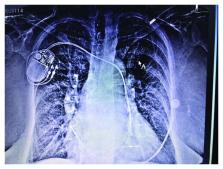 We present a challenging case of a 75-year-old female with a history of paroxysmal atrial fibrillation (PAF) and symptomatic sick sinus syndrome (SSS) who presented for a dual chamber pacemaker implantation and was found to have persistent left superior vena cava and absent right superior vena cava with stenosis of the left subclavian vein. In this report, we discuss the implant technique in this group of patients.

Venous anomalies of the thorax.

ÖZGÜL UÇAR,  HÜLYA ÇİÇEKÇİOĞLU,  İBRAHİM KOCAOĞLU … (2010)
Summary We report on a rare case of persistent left superior vena cava (PLSVC) with absent right superior vena cava (RSVC), an anomaly that is also known as isolated PLSVC. This venous malformation was identified incidentally in a 30-year-old woman during thoracic multi-detector computed tomography (MDCT), which was performed with the suspicion of intra-thoracic malignancy. On thoracic MDCT, the RSVC was absent. A bridging vein drained the right jugular and right subclavian veins and joined the left brachiocephalic vein in order to form the PLSVC, which descended on the left side of the mediastinum and drained into the right atrium (RA) via a dilated coronary sinus (CS). The patient was referred to the cardiology department for further evaluation. Transthoracic echocardiography revealed a dilated CS, and agitated saline injected from the left or right arms revealed opacification of the CS before the RA. The patient had no additional cardiac abnormality. Isolated PLSVC is usually asymptomatic but it can pose difficulties with central venous access, pacemaker implantation and cardiothoracic surgery. This condition is also associated with an increased incidence of congenital heart disease, arrhythmias and conduction disturbances. A wide spectrum of clinicians should be aware of this anomaly, its variations and possible complications.

Jacques Rizkallah,  John Burgess,  Vikas Kuriachan (2014)
Background Venous anomalies of the thorax can occur in isolation or in association with complex congenital heart disease. The incidence of an absent right superior vena cava in the setting of a persistent left superior vena cava is very rare in the general population with only a dozen cases documented in the medical literature. Such venous anomalies can make for very challenging electronic cardiac device implantation. We report our challenging dual chamber pacemaker implant in a patient with such complex anatomy and focus on our implantation technique that helped achieve adequate lead positioning. Case presentation A 73-year-old Caucasian female with degenerative complete heart block presented for dual chamber permanent pacemaker implant. Lead implantation was very challenging due to abnormal and rare vena cava anatomy; a persistent left superior vena cava drained directly into the coronary sinus and the right brachiocephalic vein drained directly into the left persistent superior vena cava as the patient had an absent right superior vena cava . Adequate right ventricular lead positioning was achieved following numerous lead-stylet manipulations and careful looping in the atria to redirect its trajectory to the ventricular apex. Conclusion Abnormal superior vena cava development is uncommon and can lead to technical challenges when venous access is required during various interventional procedures. Pre-operative imaging can help identify such challenging anatomy allowing appropriate operative planning; careful patient selection is warranted for venography given the risk of contrast nephrotoxicity.