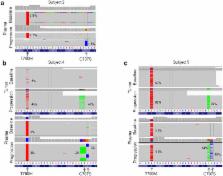 Here we studied cell-free plasma DNA (cfDNA) collected from subjects with advanced lung cancer whose tumors had developed resistance to the epidermal growth factor receptor (EGFR) tyrosine kinase inhibitor (TKI) AZD9291. We first performed next-generation sequencing of cfDNA from seven subjects and detected an acquired EGFR C797S mutation in one; expression of this mutant EGFR construct in a cell line rendered it resistant to AZD9291. We then performed droplet digital PCR on serial cfDNA specimens collected from 15 AZD9291-treated subjects. All were positive for T790M prior to treatment, but at resistance three molecular subtypes emerged: 6 cases acquired the C797S mutation, 5 cases maintained the T790M mutation but did not acquire the C797S mutation, and 4 cases lost the T790M mutation despite detecting of the underlying EGFR activating mutation. Our findings provide insight into the diversity of mechanisms through which tumors acquire resistance to AZD9291 and highlight the need for therapies able to overcome resistance mediated by EGFR C797S.

John C. Byrd,  S M Steggerda,  Ling Xue … (2014)
Ibrutinib is an irreversible inhibitor of Bruton's tyrosine kinase (BTK) and is effective in chronic lymphocytic leukemia (CLL). Resistance to irreversible kinase inhibitors and resistance associated with BTK inhibition have not been characterized. Although only a small proportion of patients have had a relapse during ibrutinib therapy, an understanding of resistance mechanisms is important. We evaluated patients with relapsed disease to identify mutations that may mediate ibrutinib resistance. We performed whole-exome sequencing at baseline and the time of relapse on samples from six patients with acquired resistance to ibrutinib therapy. We then performed functional analysis of identified mutations. In addition, we performed Ion Torrent sequencing for identified resistance mutations on samples from nine patients with prolonged lymphocytosis. We identified a cysteine-to-serine mutation in BTK at the binding site of ibrutinib in five patients and identified three distinct mutations in PLCγ2 in two patients. Functional analysis showed that the C481S mutation of BTK results in a protein that is only reversibly inhibited by ibrutinib. The R665W and L845F mutations in PLCγ2 are both potentially gain-of-function mutations that lead to autonomous B-cell-receptor activity. These mutations were not found in any of the patients with prolonged lymphocytosis who were taking ibrutinib. Resistance to the irreversible BTK inhibitor ibrutinib often involves mutation of a cysteine residue where ibrutinib binding occurs. This finding, combined with two additional mutations in PLCγ2 that are immediately downstream of BTK, underscores the importance of the B-cell-receptor pathway in the mechanism of action of ibrutinib in CLL. (Funded by the National Cancer Institute and others.).

Kin-Sun Wong,  A Cortot,  Roxana Iacob … (2009)
The clinical efficacy of epidermal growth factor receptor (EGFR) kinase inhibitors in EGFR-mutant non-small-cell lung cancer (NSCLC) is limited by the development of drug-resistance mutations, including the gatekeeper T790M mutation. Strategies targeting EGFR T790M with irreversible inhibitors have had limited success and are associated with toxicity due to concurrent inhibition of wild-type EGFR. All current EGFR inhibitors possess a structurally related quinazoline-based core scaffold and were identified as ATP-competitive inhibitors of wild-type EGFR. Here we identify a covalent pyrimidine EGFR inhibitor by screening an irreversible kinase inhibitor library specifically against EGFR T790M. These agents are 30- to 100-fold more potent against EGFR T790M, and up to 100-fold less potent against wild-type EGFR, than quinazoline-based EGFR inhibitors in vitro. They are also effective in murine models of lung cancer driven by EGFR T790M. Co-crystallization studies reveal a structural basis for the increased potency and mutant selectivity of these agents. These mutant-selective irreversible EGFR kinase inhibitors may be clinically more effective and better tolerated than quinazoline-based inhibitors. Our findings demonstrate that functional pharmacological screens against clinically important mutant kinases represent a powerful strategy to identify new classes of mutant-selective kinase inhibitors.

Bamiro B. Solomon,  Marc Ladanyi,  Maureen Zakowski … (2011)
The epidermal growth factor receptor (EGFR) mutation T790M is reported in approximately 50% of lung cancers with acquired resistance to EGFR inhibitors and is a potential prognostic and predictive biomarker. Its assessment can be challenging due to limited tissue availability and underdetection at low mutant allele levels. Here, we sought to determine the feasibility of tumor rebiopsy and to more accurately assess the prevalence of the T790M using a highly sensitive locked nucleic acid (LNA) PCR/sequencing assay. MET amplification was also analyzed. Patients with acquired resistance were rebiopsied and samples were studied for sensitizing EGFR mutations. Positive cases were evaluated for T790M using standard PCR-based methods and a subset were re-evaluated with an LNA-PCR/sequencing method with an analytical sensitivity of approximately 0.1%. MET amplification was assessed by FISH. Of 121 patients undergoing tissue sampling, 104 (86%) were successfully analyzed for sensitizing EGFR mutations. Most failures were related to low tumor content. All patients (61/61) with matched pretreatment and resistance specimens showed concordance for the original sensitizing EGFR mutation. Standard T790M mutation analysis on 99 patients detected 51(51%) mutants. Retesting of 30 negative patients by the LNA-based method detected 11 additional mutants for an estimated prevalence of 68%. MET was amplified in 11% of cases (4/37). The re-biopsy of lung cancer patients with acquired resistance is feasible and provides sufficient material for mutation analysis in most patients. Using high sensitivity methods, the T790M is detected in up to 68% of these patients. ©2011 AACR.