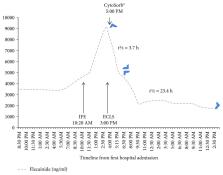 A 67-year-old woman with a history of end-stage renal disease on hemodialysis received a therapeutic dose (150 mg daily) of flecainide for three weeks. She was admitted to the Emergency Department for malaise and dizziness, and the electrocardiogram revealed ventricular tachycardia treated by amiodarone. Hemodynamic condition remained stable, and the toxicity of flecainide was initially not suspected until she developed within 8 hours a cardiogenic shock requiring vasopressors. The patient then received sodium bicarbonate (300 mmol) and dobutamine but experienced cardiac arrest two hours later. The administration of intravenous fat emulsion (IFE) was associated with return of spontaneous circulation, but there was a relapse of cardiovascular shock at the end of IFE infusion. The patient was placed on extracorporeal cardiac life support (ECLS), continuous hemofiltration, and hemoadsorption using the CytoSorb® cartridge. Serial determinations of serum flecainide concentration were obtained during the course of hemoadsorption, with a terminal half-life of 3.7 h during the first four hours and a global plasma clearance of 40.3 ml/min over the first 22 hours. The weaning of ECLS was possible on day 7. Intravenous fat emulsion infusion was followed by a significant increase in serum flecainide concentration. In addition, while conventional techniques of extrarenal epuration usually appear as poorly effective for flecainide removal, a mean plasma clearance of 40.3 ml/min was observed using the hemoadsorption technique based on CytoSorb® cartridge. However, the impact on the clinical course was probably extremely modest in comparison with ECLS.

Kiran Shekar,  Jason A Roberts,  Charles Mcdonald … (2012)
Introduction Extracorporeal membrane oxygenation (ECMO) is a supportive therapy, with its success dependent on effective drug therapy that reverses the pathology and/or normalizes physiology. However, the circuit that sustains life can also sequester life-saving drugs, thereby compromising the role of ECMO as a temporary support device. This ex vivo study was designed to determine the degree of sequestration of commonly used antibiotics, sedatives and analgesics in ECMO circuits. Methods Four identical ECMO circuits were set up as per the standard protocol for adult patients on ECMO. The circuits were primed with crystalloid and albumin, followed by fresh human whole blood, and were maintained at a physiological pH and temperature for 24 hours. After baseline sampling, fentanyl, morphine, midazolam, meropenem and vancomycin were injected into the circuit at therapeutic concentrations. Equivalent doses of these drugs were also injected into four polyvinylchloride jars containing fresh human whole blood for drug stability testing. Serial blood samples were collected from the ECMO circuits and the controls over 24 hours and the concentrations of the study drugs were quantified using validated assays. Results Four hundred samples were analyzed. All study drugs, except meropenem, were chemically stable. The average drug recoveries from the ECMO circuits and the controls at 24 hours relative to baseline, respectively, were fentanyl 3% and 82%, morphine 103% and 97%, midazolam 13% and 100%, meropenem 20% and 42%, vancomycin 90% and 99%. There was a significant loss of fentanyl (p = 0.0005), midazolam (p = 0.01) and meropenem (p = 0.006) in the ECMO circuit at 24 hours. There was no significant circuit loss of vancomycin at 24 hours (p = 0.26). Conclusions Sequestration of drugs in the circuit has implications on both the choice and dosing of some drugs prescribed during ECMO. Sequestration of lipophilic drugs such as fentanyl and midazolam appears significant and may in part explain the increased dosing requirements of these drugs during ECMO. Meropenem sequestration is also problematic and these data support a more frequent administration during ECMO.