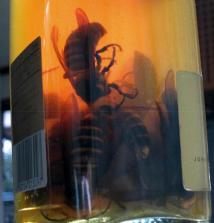 This report presents the details of a case of sight-threatening injury in the right eye of a 77-year-old man which was caused by the venom of the Asian giant hornet ( Vespa mandarinia). The patient was not stung, rather the venom was sprayed into his eye. Although the injured eye was washed as a first aid treatment, persistent corneal defect, corneal endothelial decompensation, iris atrophy, pupil dilation, and mature cataract were observed and a hand movement visual acuity was recorded 8 weeks after the injury. Since a slight a-wave was detected in his electroretinogram (ERG) result after the corneal epithelial defect had healed, we performed cataract surgery and Descemet stripping automated endothelial keratoplasty (DSAEK). After the DSAEK, the cornea of the right eye became clearer; however, the visual acuity of his right eye did not improve. Fundus examination revealed branch retinal artery occlusion but no optic disc atrophy. ERG showed that the a-wave amplitude of the injured eye recorded after the surgery was almost half of that of the fellow eye. The iris atrophy and mature cataract show that the sprayed Vespa venom of the Asian giant hornet can permeate into the intraocular area even without stinging. Whether the venom directly affects retinal function is unclear, but the decreased a-wave of the injured eye shows that the venom caused damage of retinal function in some way. Irrigation of the anterior chamber as well as eye washing is needed as a first aid treatment in similar cases.

Hiroshi Hori,  Masato Ono,  Masami Sasaki … (2003)
Up to 74 people die each year in Japan after being stung by Hymenopteran insects, with hornets (Vespa spp.) being among the worst offenders. Here we identify a volatile, multi-component alarm pheromone in the venom of the world's largest hornet, V. mandarinia, and use field bioassays to show that 2-pentanol is its principal active component, and that 3-methyl-1-butanol and 1-methylbutyl 3-methylbutanoate act synergistically with it. The compound 1-methylbutyl 3-methylbutanoate, which may also be a foraging-site-marking pheromone, elicits a strong defensive reaction in the sympatric prey hornet V. simillima xanthoptera. As these chemicals are sometimes used in food flavourings and as fragrances in cosmetics, it is possible that they might provoke a seemingly unwarranted hornet attack on humans.