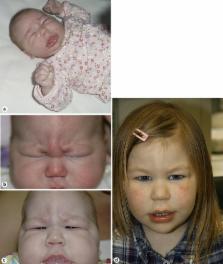 Botulinum toxin injections are the treatment of choice for the management of essential blepharospasm in adults. No cases of congenital blepharospasm have been described in the literature so far, and no cases of botulinum toxin injection in an infant have been reported. A 4-week-old girl was referred to our department with absent eye opening and spasmodically closed eyes. Pregnancy and delivery had been normal. A neuropediatric examination did not reveal useful findings. A periorbital injection of botulinum toxin was performed at the age of 2 months to prevent deprivation amblyopia. Four days later, clearly visible bilateral eye opening and commencement of eye contact were observed. At the age of 3 years, her eyelids remain open and no side effects of botulinum toxin therapy have occurred.

Mark Hallett (2002)
Benign essential blepharospasm is a common focal dystonia characterized by involuntary eyelid closure. Its etiology, supported by animal models, appears to be multifactorial, representing the influence of a genetic background and an environmental trigger. The genetic background could be responsible for the reduced brain inhibition, identified with physiologic studies that would set up a permissive condition for increased brain plasticity. Reduced D2 receptors identified with PET might be an indicator of this reduced inhibition. The trigger could be repetitive use or local ocular disease. Although symptomatic therapy is available, better approaches are needed and will likely become available as the genetics and pathophysiology become well understood.

Bettina Wabbels,  Wolfgang H Jost,  Peter Roggenkämper (2011)
Blepharospasm is a focal dystonia in which the extraocular muscles contract repetitively, leading to excessive blinking and forced eyelid closure. Botulinum toxin type A (BoNTA) is the primary symptomatic treatment for blepharospasm and its effects have been evaluated using numerous rating scales. The main scales in use today were initially used to determine whether BoNTA treatment was superior to placebo, and most controlled trials have confirmed this. More recently, these scales have been used to determine whether there are efficacy differences between different BoNTs in blepharospasm. However, although the scales used in these trials are able to differentiate the effects of BoNT from placebo, they may not be sensitive enough to differentiate between BoNTs. Most of the scales include only four possible points for each item, which would necessitate a 25% greater improvement in one group than the other to detect any differences. Current scales are also relatively insensitive to patients with mild disability who may experience mainly psychosocial problems related to their blepharospasm. Clinical trials comparing BoNTs that include substantial numbers of mildly affected patients may be unlikely to find differences because the scales do not adequately measure mild symptoms. Additional challenges with evaluating blepharospasm include the lack of precision and objectivity of current measures, symptom variability, the need to evaluate aspects of the disorder that are most important to patients, and the different types of blepharospasm. Although no single scale may be able to capture all relevant aspects of blepharospasm, more sensitive and patient-centered scales are needed.

Off Label Use of Botulinum Toxin in Children under Two Years of Age: A Systematic Review

Claudia Druschel,  Henriette Althuizes,  Julia Funk … (2013)
The treatment of children with cerebral palsy with Botulinum Toxin is considered safe and effective, but is only approved for children older than two years of age. The effect of BoNT-A injection on juvenile skeletal muscle especially on neuromuscular junction density, distribution and morphology is poorly delineated and concerns of irreversible damage to the motor endplates especially in young children exist. In contrast, earlier treatment could be appropriate to improve the attainment of motor milestones and general motor development. This review systematically analyzes the evidence regarding this hypothesis. A database search, including PubMed and Medline databases, was performed and all randomized controlled trials (RCTs) comparing the efficacy of Botulinum Toxin in children younger than two years were identified. Two authors independently extracted the data and the methods of all identified trials were assessed. Three RCTs met the inclusion criteria. The results of the analysis revealed an improvement in spasticity of the upper and lower extremities as well as in the range of motion in the joints of the lower limbs. However, evidence of an improvement of general motor development could not be found, as the assessment of this area was not completely specified for this patient group. Based on available evidence it can not be concluded that Botulinum Toxin treatment in children younger than two years improves the achievement of motor milestones. However, there is evidence for the reduction of spasticity, avoiding contractures and delaying surgery. Due to some limitations, the results of this review should be cautiously interpreted. More studies, long-term follow up independent high-quality RCTs with effectiveness analyses are needed.

This is an Open Access article licensed under the terms of the Creative Commons Attribution-NonCommercial 3.0 Unported license (CC BY-NC) (www.karger.com/OA-license), applicable to the online version of the article only. Users may download, print and share this work on the Internet for noncommercial purposes only, provided the original work is properly cited, and a link to the original work on http://www.karger.com and the terms of this license are included in any shared versions.