Infantile Hepatic Hemangioendothelioma in Comparison with Hepatoblastoma in Children: Clinical and Ultrasound Features 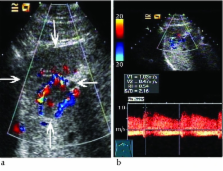 Infantile hepatic hemangioendothelioma (IHH) and hepatoblastoma (HBL) are respectively the most common benign and malignant liver tumors in children.

To study the clinical manifestations and the ultrasound features of the pediatric patients for distinguishing IHH from HBL.

Between 2002 and 2012, thirteen children with IHH and 38 children with HBL under the age of 10 years were included. We retrospectively reviewed the clinical and the ultrasound features of the two groups, especially including parameters as follows: age at diagnosis, gender, alpha-fetoprotein (AFP) elevation, venous involvement and Doppler ultrasound.

The clinical features are effective indicators for distinguishing IHH from HBL, and the spectral Doppler may be a useful adjunct parameter for differential diagnosis.

Hepatic hemangiomas: subtype classification and development of a clinical practice algorithm and registry.

Harriet Paltiel,  Josée Dubois,  Steven J. Fishman … (2006)
Hepatic hemangiomas, though histologically benign, may be associated with significant morbidity and mortality in afflicted infants. The literature presents much confusion regarding the natural history and treatment options for hepatic hemangiomas. Clinical manifestations range from asymptomatic self-limiting lesions to congestive heart failure associated with high-volume vascular shunting to fulminant hepatic failure with hypothyroidism, abdominal compartment syndrome, and death. There has been little rationale to choose among observation, corticosteroid, other pharmacologic agents, arterial embolization, hepatic artery ligation, resection, or liver transplantation for any given patient. We analyzed several recent retrospective radiologic analyses and pathologic studies to determine whether hepatic hemangiomas could be categorized, allowing prediction of their natural history and rational choice of therapies based upon their clinical presentation and radiographic appearance. We propose that hepatic hemangiomas do not represent a single entity but, rather, 3 principle categories of lesions: focal, multifocal, and diffuse. Because these 2 categories represent different anatomical and physiologic variants, so, too, may they respond differently to previously anecdotally applied treatment regimens. With input from international multidisciplinary authorities on hemangiomas, we developed and proposed a clinical practice algorithm for the evaluation and management of hepatic hemangiomas. Toward that end, we propose a plan to institute a web-based international hepatic hemangioma registry. Participants in the registry could obtain no-cost centralized review of imaging studies (and histology if available) and guidance regarding the management algorithm from an established multidisciplinary team. In exchange, the registry will facilitate the acquisition of systematic clinical and imaging information. Longitudinal observation of response to more directed treatment protocols may contribute greatly to the understanding of these potentially fatal tumors.

C Herzog,  F Eftekhari,  R Andrassy (1999)
Hepatoblastoma is the most common primary liver tumor in children, accounting for just over 1% of pediatric cancers. The etiology is unknown, but it has been associated with Beckwith-Weidemann syndrome, familial adenomatosis polypi, and low birth weight. The primary treatment is surgical resection, however, chemotherapy plays an important role by increasing the number of tumors that are resectable. The prognosis for patients with resectable tumors is fairly good, however, the outcome for those with nonresectable or recurrent disease is poor.

Hart Isaacs (2007)
Although hepatic tumors are uncommon in the perinatal period they are associated with significant morbidity and mortality in affected patients. The purpose of this review is to focus on the fetus and neonate in an attempt to determine the various ways liver tumors differ clinically and pathologically from those found in the older child and adult and to show that certain types of tumors have a better prognosis than others. The author conducted a retrospective review of perinatal hepatic tumors reported in the literature and of patients treated and followed up at Children's Hospital San Diego and Children's Hospital Los Angeles. Only fetuses and infants younger than 2 months with adequate clinical and pathologic data ere accepted for review. The period of patient accrual was from 1970 to 2005. Length of follow-up varied from 1 week to more than 5 years. Elevated alpha-fetoprotein level was defined as one significantly higher than that of the reporting institution's normal level for age group; laboratory values for this protein vary from one institution to the next and therefore it was not possible to assign one figure as a standard reference number. Discussion of the differential diagnosis and pathologic findings of hepatic tumors in the fetus and neonate are described elsewhere and will not be discussed here in detail (Perspect Pediatr Pathol 1978;4:217; Weinberg AG, Finegold MJ. Primary hepatic tumors in childhood. In: Finegold M, editor. Pathology of neoplasia in children and adolescents. Philadelphia, PA: WB Saunders, 1986; Am J Surg Pathol 1982;6:693; Pediatr Pathol 1983;1:245; Arch Surg 1990;125:598; Semin Neonatol 2003;8:403; Pediatr Pathol 1985;3:165; Isaacs H Jr. Liver tumors. In: Isaacs H Jr, editor. Tumors of the fetus and newborn. Philadelphia, PA: WB Saunders, 1997; Isaacs H Jr. Liver tumors. In: Isaacs H Jr, editor. Tumors of the fetus and infant: an atlas. Philadelphia, PA: WB Saunders, 2002). One hundred ninety-four fetuses and neonates presented with hepatic tumors diagnosed prenatally (n = 56) and in the neonatal period (n = 138). The study consisted of 3 main tumors: hemangioma (117 cases, 60.3%), mesenchymal hamartoma (45 cases, 23.2%), and hepatoblastoma (32 cases, 16.5%). The most common initial finding was a mass found either by antenatal sonography or by physical examination during the neonatal period. Overall, hydramnios was next followed by fetal hydrops, respiratory distress, and congestive heart failure, which were often related to the cause of death. Half of the fetuses and neonates with hepatoblastoma had abnormally elevated serum alpha-fetoprotein levels compared with 16 (14%) of 117 of those with hemangioma and 1 neonate with mesenchymal hamartoma. There were 76 (65%) examples of solitary (unifocal) hemangiomas and 41 (35%) of multifocal (which included the entity diffuse hemangiomatosis) with 86% and 71% survival rates, respectively. Of 45 patients with mesenchymal hamartoma, of the 29 (64%) who had surgical resections, 23 (79%) survived. Patients with hepatoblastoma had the worst outcome of the group, for only 8 (25%) of 32 were alive. Half of patients with either stage 1 or 3 hepatoblastoma died; no patient with stage 4 survived. There was some relationship between histologic type and prognosis. For example, half of the patients with the pure fetal hepatoblastoma histology survived compared with those with fetal and embryonal histology where 30% survived. Fifteen of 32 hepatoblastoma patients received surgical resection with or without chemotherapy, resulting in 7 (47%) of 15 cures. The 56 fetuses and 138 neonates with hepatic tumors (hemangioma, mesenchymal hamartoma, and hepatoblastoma) had survival rates of 75%, 64%, and 25%, respectively. The overall survival of the entire group consisting of 194 tumors was 125 or 64%. The study shows that clinical findings in fetuses and neonates with hepatic tumors are less well defined than in older children. Survival rates are much lower as well. When the clinical course is complicated by associated conditions such as stillbirth, fetal hydrops, congestive heart failure, severe anemia, or thrombocytopenia, the mortality rate is much greater. If the patient is mature enough and in a clinical condition where he or she can be operated on, survival figures approach those of the older child. Some hepatic tumors have a better prognosis than others. Neonates with focal (solitary) hepatic hemangiomas have the best outcome and fetuses with hepatoblastoma the worst. Although infantile hemangioma undergoes spontaneous regression, it may be life threatening when congestive heart failure and/or consumptive coagulopathy occur. Mesenchymal hamartoma is a benign lesion best treated by surgical resection, which usually results in cure. However, there are fatal complications associated with this tumor, ie, fetal hydrops, respiratory distress, and circulatory problems owing to a large space occupying abdominal lesion and sometimes stillbirth, all contributing to the death rate. Hepatoblastoma, the major malignancy of the fetus and neonate, is treated primarily by surgical resection. Pre- or postoperative chemotherapy is reserved for those patients with unresectable tumors or metastatic disease. The survival rate is much lower than that reported by multigroup prospective trials. Patients die from the mass effect caused by the tumor, which lead to abdominal distension, vascular compromise, anemia, hydrops, respiratory distress, and stillbirth. Metastases to the abdominal cavity, lungs, and placenta are other causes of death. Because of the danger of labor-induced rupture of the tumor and potentially fatal intraabdominal hemorrhage, cesarean delivery is recommended when a hepatic tumor is found on prenatal ultrasound.