Genomewide pharmacogenomic study of metabolic side effects to antipsychotic drugs 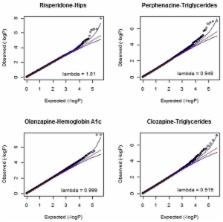 Understanding individual differences in the susceptibility to metabolic side effects as a response to antipsychotic therapy is essential to optimize the treatment of schizophrenia. Here we perform genomewide association studies (GWAS) to search for genetic variation affecting the susceptibility to metabolic side effects. The analysis sample consisted of 738 schizophrenia patients, successfully genotyped for 492K SNPs, from the genomic subsample of the Clinical Antipsychotic Trial of Intervention Effectiveness (CATIE) study. Outcomes included twelve indicators of metabolic side effects, quantifying antipsychotic-induced change in weight, blood lipids, glucose and hemoglobin A1c, blood pressure and heart rate. Our criterion for genomewide significance was a pre-specified threshold that ensures, on average, only 10% of the significant findings are false discoveries. Twenty-one SNPs satisfied this criterion. The top finding indicated a SNP in MEIS2 mediated the effects of risperidone on hip circumference ( q =.004). The same SNP was also found to mediate risperidone's effect on waist circumference ( q =.055). Genomewide significant finding were also found for SNPs in PRKAR2B, GPR98, FHOD3, RNF144A, ASTN2, SOX5 and ATF7IP2, as well as several intergenic markers. PRKAR2B and MEIS2 both have previous research indicating metabolic involvement and PRKAR2B has previously been shown to mediate antipsychotic response. Although our findings require replication and functional validation, this study demonstrates the potential of GWAS to discover genes and pathways that potentially mediate adverse effects of antipsychotic medication.

Effectiveness of antipsychotic drugs in patients with chronic schizophrenia.

Jeffrey A Lieberman,  T. Stroup,  Joseph P. McEvoy … (2005)
The relative effectiveness of second-generation (atypical) antipsychotic drugs as compared with that of older agents has been incompletely addressed, though newer agents are currently used far more commonly. We compared a first-generation antipsychotic, perphenazine, with several newer drugs in a double-blind study. A total of 1493 patients with schizophrenia were recruited at 57 U.S. sites and randomly assigned to receive olanzapine (7.5 to 30 mg per day), perphenazine (8 to 32 mg per day), quetiapine (200 to 800 mg per day), or risperidone (1.5 to 6.0 mg per day) for up to 18 months. Ziprasidone (40 to 160 mg per day) was included after its approval by the Food and Drug Administration. The primary aim was to delineate differences in the overall effectiveness of these five treatments. Overall, 74 percent of patients discontinued the study medication before 18 months (1061 of the 1432 patients who received at least one dose): 64 percent of those assigned to olanzapine, 75 percent of those assigned to perphenazine, 82 percent of those assigned to quetiapine, 74 percent of those assigned to risperidone, and 79 percent of those assigned to ziprasidone. The time to the discontinuation of treatment for any cause was significantly longer in the olanzapine group than in the quetiapine (P<0.001) or risperidone (P=0.002) group, but not in the perphenazine (P=0.021) or ziprasidone (P=0.028) group. The times to discontinuation because of intolerable side effects were similar among the groups, but the rates differed (P=0.04); olanzapine was associated with more discontinuation for weight gain or metabolic effects, and perphenazine was associated with more discontinuation for extrapyramidal effects. The majority of patients in each group discontinued their assigned treatment owing to inefficacy or intolerable side effects or for other reasons. Olanzapine was the most effective in terms of the rates of discontinuation, and the efficacy of the conventional antipsychotic agent perphenazine appeared similar to that of quetiapine, risperidone, and ziprasidone. Olanzapine was associated with greater weight gain and increases in measures of glucose and lipid metabolism. Copyright 2005 Massachusetts Medical Society.

Heather B. Hayes,  Belinda Hall,  David P. Strachan … (2009)
Common variants at only two loci, FTO and MC4R, have been reproducibly associated with body mass index (BMI) in humans. To identify additional loci, we conducted meta-analysis of 15 genome-wide association studies for BMI (n > 32,000) and followed up top signals in 14 additional cohorts (n > 59,000). We strongly confirm FTO and MC4R and identify six additional loci (P < 5 x 10(-8)): TMEM18, KCTD15, GNPDA2, SH2B1, MTCH2 and NEGR1 (where a 45-kb deletion polymorphism is a candidate causal variant). Several of the likely causal genes are highly expressed or known to act in the central nervous system (CNS), emphasizing, as in rare monogenic forms of obesity, the role of the CNS in predisposition to obesity.