Antioxidant compounds and activities of the stem, flower, and leaf extracts of the anti-smoking Thai medicinal plant: Vernonia cinerea Less 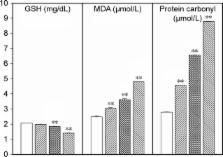 Vernonia cinerea (VC) Less has been proposed as a medicinal plant with interesting activities, such as an aid for smoking cessation worldwide. Despite its previous clinical success in smoking cessation by exhibiting reduced oxidative stress, it has not been approved. The aim of this study was to investigate various antioxidant activity and active compounds that have not been approved, including the protective activity in human red blood cells (RBCs), from the stem, flower, and leaf extracts of VC Less in vitro. These extracts were tested for their antioxidant activity in scavenging 1,1-diphenyl-2-picrylhydrazyl (DPPH) radicals and analyzed by high-performance liquid chromatography (HPLC) for their active compounds: total tannin, five catechin (C) compounds (epicatechin gallate [ECG], C, epicatechin [EC], epigallocatechin gallate [EGCG], and (−)-epigallocatechin [EGC]), flavonoid, nitrite, nitrate, caffeine, and nicotine. Moreover, antioxidant activities of the extracts were evaluated in 2,2′-azobis(2-amidinopropane) dihydrochloride (AAPH)-treated RBCs. The results showed that the flower and leaf of VC Less had higher activity than the stem in scavenging DPPH radicals. The tannin content in the flower and leaf was higher than that in the stem. The leaf had the highest content of the five catechins (C, EC, EGCG, ECG, and EGC), the same as in the flavonoid, when compared to the stem and flower. Furthermore, the leaf extract had higher nitrate and nitrite than the stem. Nicotine content was found to be higher in the leaf when compared to the flower. In addition, the leaf showed protective activity in glutathione (GSH), malondialdehyde (MDA), and protein carbonyl, with a dose response in AAPH-oxidized RBCs, the same as in standard EGCG. Thus, this study concluded that radical scavenging and antioxidant compounds such as catechins, flavonoid, nitrate and nitrite, and nicotine are present in different VC Less parts and are included in the AAPH-oxidized RBC model.

Free-radical chemistry of cigarette smoke and its toxicological implications.

D Church,  W A Pryor (1985)
Cigarette smoke contains two very different populations of free radicals, one in the tar and one in the gas phase. The tar phase contains several relatively stable free radicals; we have identified the principal radical as a quinone/hydroquinone (Q/QH2) complex held in the tarry matrix. We suggest that this Q/QH2 polymer is an active redox system that is capable of reducing molecular oxygen to produce superoxide, eventually leading to hydrogen peroxide and hydroxyl radicals. In addition, we have shown that the principal radical in tar reacts with DNA in vitro, possibly by covalent binding. The gas phase of cigarette smoke contains small oxygen- and carbon-centered radicals that are much more reactive than are the tar-phase radicals. These gas-phase radicals do not arise in the flame, but rather are produced in a steady state by the oxidation of NO to NO2, which then reacts with reactive species in smoke such as isoprene. We suggest that these radicals and the metastable products derived from these radical reactions may be responsible for the inactivation of alpha 1-proteinase inhibitor by fresh smoke. Cigarette smoke oxidizes thiols to disulfides; we suggest the active oxidants are NO and NO2. The effects of smoke on lipid peroxidation are complex, and this is discussed. We also discuss the toxicological implications for the radicals in smoke in terms of a number of radical-mediated disease processes, including emphysema and cancer.

Erica L Levine (2002)
The oxidative modification of proteins by reactive species is implicated in the etiology or progression of a panoply of disorders and diseases. The level of these modified molecules can be quantitated by measurement of the protein carbonyl content, which has been shown to increase in a variety of diseases and processes, notably during aging. For the most part, oxidatively modified proteins are not repaired and must be removed by proteolytic degradation, a process which normally proceeds very efficiently, from microorganisms to mammals. In eukaryotes, removal is usually carried out by the proteosome, which selectively degrades oxidatively modified proteins, whether they be damaged by reactive oxygen species or specifically oxidized by cellular regulatory processes. The molecular deficiencies that cause accumulation of oxidatively modified proteins are not identified, but regardless of cause, the accumulation is likely to disrupt normal cellular function.