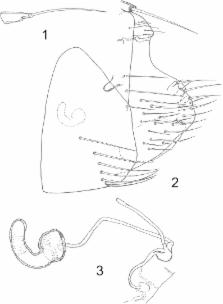 A list is provided for the species of Ectinorus sensu stricto from Chile. Ectinorus ( Ectinorus) insignis n. sp. is described from Chile: this species is characterized by the male genitalia. In the subgenus Ectinorus, the authors report the presence in Chile of E. pilosus Beaucournu & Carmen Castro, 2002 described from Argentina and E. simonsi (Rothschild, 1904) described from Bolivia but also known from Peru. A female neallotype is designated for E. ineptus Johnson, 1957. “Unciform sclerotization” is noted and illustrated for the first time, in all Malacopsylloidea, and a list is given for all studied species.

P Linardi,  L Guimarães (1993)
A systematic review of genera and subgenera of Siphonaptera Rhopalopsyllinae comprising nine operating taxonomic units is presented based on phenetic and cladistic analysis. Twenty-seven characters of adults were analyzed and the character states were determined for each character by the out-group method. Phenogram and cladograms indicated two tribes, each with two subtribes. Systematic changes proposed as a result of this study include the raising of the subgeneric status of Gephyropsylla, Hechteilla, and Ayeshaepsylla to independent genera; the recognition of a new genus, Neotropsylla, to include Polygenis guimaraesi Linardi; the division of the genus Polygenis Jordan into two subgenera: Neopolygenis subgen. n., to include species of the atopus group, and Polygenis s. str., for remaining species.

Notes on some fleas (Siphonaptera) from Chile.