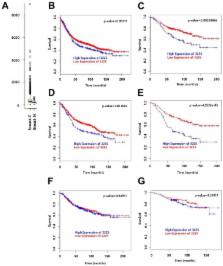 HOX genes encode a family of transcriptional regulators that are involved in pattern formation and organogenesis during embryo development. In addition, these genes play important roles in adult tissues and some of the dysregulated HOX genes are associated with cancer development and metastasis. Like many other HOX genes, HOXC9 is aberrantly expressed in certain breast cancer cell lines and tissues; however, its specific functions in breast cancer progression were not investigated. In the present study, we demonstrated that HOXC9 overexpression in breast cancer cell lines such as MDA-MB-231 and MCF7 increased the invasiveness but reduced the proliferation of cells, resembling a phenotype switch from a proliferative to an invasive state. Furthermore, the reciprocal result was detected in MCF7 and BT474 cells when the expression level of HOXC9 was reduced with siRNA. The clinical impact of HOXC9 in breast cancer was interpreted from the survival analysis data, in which high HOXC9 expression led to considerably poorer disease-free survival and distant metastasis-free survival, especially in lymph node-positive patients. Together, the prognostic relevance of HOXC9 and the HOXC9-derived phenotypic switch between proliferative and invasive states in the breast cancer cell lines suggest that HOXC9 could be a prognostic marker in breast cancer patients with lymph node metastasis and a target for therapeutic intervention in malignant breast cancer.

The Hox genes and their roles in oncogenesis.

Nilay Shah,  Saraswati Sukumar (2010)
Hox genes, a highly conserved subgroup of the homeobox superfamily, have crucial roles in development, regulating numerous processes including apoptosis, receptor signalling, differentiation, motility and angiogenesis. Aberrations in Hox gene expression have been reported in abnormal development and malignancy, indicating that altered expression of Hox genes could be important for both oncogenesis and tumour suppression, depending on context. Therefore, Hox gene expression could be important in diagnosis and therapy.

HOX genes and their role in the development of human cancers.

Seema Bhatlekar,  Jeremy Fields,  Bruce M. Boman (2014)
In this review, we summarize published findings on the involvement of HOX genes in oncogenesis. HOX genes are developmental genes--they code for proteins that function as critical master regulatory transcription factors during embryogenesis. Many reports have shown that the protein products of HOX genes also play key roles in the development of cancers. Based on our review of the literature, we found that the expression of HOX genes is not only up- or downregulated in most solid tumors but also that the expression of specific HOX genes in cancers tends to differ based on tissue type and tumor site. It was also observed that HOXC family gene expression is upregulated in most solid tumor types, including colon, lung, and prostate cancer. The two HOX genes that were reported to be most commonly altered in solid tumors were HOXA9 and HOXB13. HOXA were often reported to have altered expression in breast and ovarian cancers, HOXB genes in colon cancers, HOXC genes in prostate and lung cancers, and HOXD genes in colon and breast cancers. It was found that HOX genes are also regulated at the nuclear-cytoplasmic transport level in carcinomas. Tumors arising from tissue having similar embryonic origin (endodermal), including colon, prostate, and lung, showed relatively similar HOXA and HOXB family gene expression patterns compared to breast tumors arising from mammary tissue, which originates from the ectoderm. The differential expression of HOX genes in various solid tumors thus provides an opportunity to advance our understanding of cancer development and to develop new therapeutic agents.

Gwangsik Shin,  Tae-Wook Kang,  Sungjin Yang … (2011)
Background: Some oncogenes such as ERBB2 and EGFR are over-expressed in only a subset of patients. Cancer outlier profile analysis is one of computational approaches to identify outliers in gene expression data. A database with a large sample size would be a great advantage when searching for genes over-expressed in only a subset of patients. Description: GENT (Gene Expression database of Normal and Tumor tissues) is a web-accessible database that provides gene expression patterns across diverse human cancer and normal tissues. More than 40000 samples, profiled by Affymetrix U133A or U133plus2 platforms in many different laboratories across the world, were collected from public resources and combined into two large data sets, helping the identification of cancer outliers that are over-expressed in only a subset of patients. Gene expression patterns in nearly 1000 human cancer cell lines are also provided. In each tissue, users can retrieve gene expression patterns classified by more detailed clinical information. Conclusions: The large samples size (>24300 for U133plus2 and >16400 for U133A) of GENT provides an advantage in identifying cancer outliers. A cancer cell line gene expression database is useful for target validation by in vitro experiment. We hope GENT will be a useful resource for cancer researchers in many stages from target discovery to target validation. GENT is available at http://medicalgenome.kribb.re.kr/GENT/ or http://genome.kobic.re.kr/GENT/.