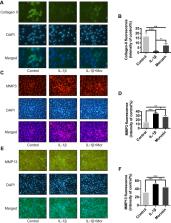 Osteoarthritis (OA) is one of the most common degenerative joint diseases in the world, characterized primarily by the progressive degradation of articular cartilage. Accumulating evidence has shown that Morusin, a flavonoid derived from the root bark of Morus alba (mulberry) plants, exerts unique protective properties in several diseases. However, its effects on OA, specifically, have not yet been characterized.

Herein, we demonstrate that Morusin reduces the OA inflammatory response in vitro and protects against articular cartilage degradation in vivo potentially via regulation of the NF-κB pathway. Hence, Morusin may prove to be an effective candidate for novel OA therapeutic strategies.

M Nevitt,  Nigel Arden (2006)
Osteoarthritis (OA) is the most common joint disorder in the world. In Western populations it is one of the most frequent causes of pain, loss of function and disability in adults. Radiographic evidence of OA occurs in the majority of people by 65 years of age and in about 80% of those aged over 75 years. In the US it is second only to ischaemic heart disease as a cause of work disability in men over 50 years of age, and accounts for more hospitalizations than rheumatoid arthritis (RA) each year. Despite this public health impact, OA remains an enigmatic condition to the epidemiologist. In this chapter, we will review the definition and classification of OA, its prevalence, incidence, risk factors and natural history.

C. Bonnet,  Adam D Walsh (2004)
Angiogenesis and inflammation are closely integrated processes in osteoarthritis (OA) and may affect disease progression and pain. Inflammation can stimulate angiogenesis, and angiogenesis can facilitate inflammation. Angiogenesis can also promote chondrocyte hypertrophy and endochondral ossification, contributing to radiographic changes in the joint. Inflammation sensitizes nerves, leading to increased pain. Innervation can also accompany vascularization of the articular cartilage, where compressive forces and hypoxia may stimulate these new nerves, causing pain even after inflammation has subsided. Inhibition of inflammation and angiogenesis may provide effective therapeutics for the treatment of OA by improving symptoms and retarding joint damage. This review aims to summarize (i) the evidence that angiogenesis and inflammation play an important role in the pathophysiology of OA and (ii) possible directions for future research into therapeutics that could effectively treat this disease.

L Almekinders,  Pamela W Garrett,  G Guyton … (2003)
Overuse injuries and trauma in tendon often involve acute or chronic pain and eventual matrix destruction. Anti-inflammatory drugs have been used as a treatment, however, the cellular and molecular mechanisms of the destructive processes in tendon are not clearly understood. It is thought that an inflammatory event may be involved as an initiating factor. Mediators of the inflammatory response include cytokines released from macrophages and monocytes. Interleukin-1 beta (IL-1 beta) is a candidate proinflammatory cytokine that is active in connective tissues such as bone and cartilage. We hypothesized that tendon cells would express receptors and respond to IL-1 beta in an initial "molecular inflammation" cascade, that is, connective tissue cell expression of cytokines that induce matrix destructive enzymes. This cascade results in expression of matrix metalloproteinases (MMPs) and aggrecanases that may lead to matrix destruction. Normal human tendon cells from six patients were isolated, grown to quiescence and treated with human recombinant IL-1 beta in serum-free medium for 16 h. Total RNA was isolated and mRNA expression assessed by semiquantitative RT-PCR. IL-1 beta (1 nM) induced mRNAs for cyclooxygenase 2 (COX2), MMP-1, -3, -13 and aggrecanase-1 as well as IL-1 beta and IL-6, whereas mRNAs for COX1 and MMP-2 were expressed constitutively. The IL-1 beta-treated tendon cells released prostaglandin E(2) (PGE(2)) in the medium, suggesting that the inducible COX2 catalyzed this synthesis. Induction of PGE(2) was detectable at 10 pM IL-1 beta. IL-1 beta also stimulated MMP-1 and -3 protein secretion. Induction of MMP-1 and -3 was detectable at 10 pM IL-1 beta. Post-injury or after some other inciting events, exogenous IL-1 beta released upon bleeding or as leakage of local capillaries may drive a proinflammatory response at the connective tissue cell level. The resulting induction of COX2, MMP-1 and -3 may underscore a potential for nonlymphocyte-mediated cytokine production of MMPs that causes matrix destruction and a loss of tendon biomechanical properties. Endogenous IL-1 beta might contribute to the process through a positive feedback loop by stimulating expression and accumulation of MMPs in the tendon matrix.