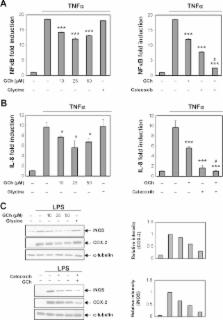 In an inflammatory state where HOCl is generated, glycine readily reacts with HOCl to produce glycine chloramine, an anti-inflammatory oxidant. Colonic delivery of celecoxib elicits anticolitic effects in a trinitrobenzene sulfonic acid-induced rat colitis model. Glycine-bearing celecoxib derivatives were prepared and evaluated as a colon-specific mutual prodrug acting on nuclear factor-κB (NFκB), an anticolitic target. Glycylcelecoxib (GC), N-glycylaspart-1-ylcelecoxib (N-GA1C), and C-glycylaspart-1-ylcelecoxib (C-GA1C) were synthesized and their structures identified using infrared and proton nuclear magnetic resonance spectrometer. The celecoxib derivatives were chemically stable in pH 6.8 and 1.2 buffers. GC and C-GA1C were resistant to degradation in the small intestinal contents, while N-GA1C was substantially cleaved to release celecoxib. In contrast, all the celecoxib derivatives were degraded to liberate celecoxib in the cecal content. These results suggest that GC and C-GA1C could be delivered to and liberate celecoxib and glycine in the large intestine. In human colon carcinoma HCT116 and murine macrophage RAW264.7 cells, combined celecoxib–glycine chloramine treatment additively suppressed the production of proinflammatory NFκB target gene products. Collectively, our data suggest that C-GA1C is a potential colon-specific mutual prodrug acting against NFκB.

Auras R. Atreya,  M Neurath,  I Atreya (2008)
Apart from genetic and environmental factors, the mucosal immune system of the gut plays a central role in the pathogenesis of inflammatory bowel disease (IBD). In the healthy gut, the mucosal immune system ensures the balance between pro- and anti-inflammatory mediators and thereby allows an effective defence against luminal pathogens but at the same time prevents an overwhelming immune reaction directed against the huge amount of harmless luminal antigens (for example, components of food or nonpathological bacteria). In both entities of IBD (Crohn's disease and ulcerative colitis) this immunological balance is severely impaired and shifted towards the pro-inflammatory side. The chronic mucosal inflammation in IBD is caused by hyperactivation of effector immune cells, which produce high levels of pro-inflammatory cytokines like tumour necrosis factor-alpha, interleukin-6 and interferon-gamma, resulting in colonic tissue damage. The nuclear transcription factor kappaB (NF-kappaB) was identified as one of the key regulators in this immunological setting. Its activation is markedly induced in IBD patients and through its ability to promote the expression of various pro-inflammatory genes, NF-kappaB strongly influences the course of mucosal inflammation. Considering the different cell-type specific effects which are mediated by NF-kappaB, this review aims at describing the complex role of NF-kappaB in IBD and discusses existing pharmacological attempts to block the activation of NF-kappaB to develop new therapeutic strategies in IBD.

Safety of celecoxib in patients with ulcerative colitis in remission: a randomized, placebo-controlled, pilot study.

Metabolic and pharmacological properties of rutin, a dietary quercetin glycoside, for treatment of inflammatory bowel disease.

Y. Yang,  Daniel S. H. Kong,  Len Neckers … (2005)
Orally administered rutin reportedly ameliorates 2,4,6-trinitrobenzene sulfonic acid (TNBS)-induced colitis of rats. We investigated the metabolic and pharmacological properties of rutin underlying the rutin-mediated amelioration of the rat colitis. Apparent partition coefficients of rutin and its aglycone quercetin were compared. The biochemical/chemical stability of rutin was examined in the contents of various segments of gastrointestinal tracts of rats. Inflammatory indices were determined in the colitis rats after oral administration of rutin or rectal administration of quercetin. In human colon epithelial cells, the effect of quercetin on tumor necrosis factor-alpha (TNF-alpha)-induced nuclear factor kappa B (NFkappaB) activation was examined. The sugar residue in rutin greatly lowered the apparent partition coefficient and was rapidly deglycosylated to liberate quercetin in the cecal contents, whereas it was stable in the contents of the upper intestine. Not only oral administration of rutin but also rectal administration of quercetin remarkably ameliorated TNBS-induced colitis rats, indicating that quercetin liberated from rutin is therapeutically active. Furthermore, quercetin dose-dependently inhibited an inflammatory signal TNF-alpha-dependent NFkappaB activation. Our data suggest that rutin acted as a quercetin deliverer to the large intestine and its anti-inflammatory action in TNBS-induced colitis rats may be through quercetin-mediated inhibition of TNF-alpha-induced NFkappaB activation.