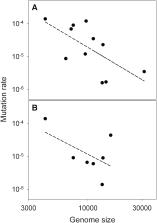 Genome sizes and mutation rates covary across all domains of life. In unicellular organisms and DNA viruses, they show an inverse relationship known as Drake’s rule. However, it is still unclear whether a similar relationship exists between genome sizes and mutation rates in RNA genomes. Coronaviruses, the RNA viruses with the largest genomes (∼30 kb), encode a proofreading 3′ exonuclease that allows them to increase replication fidelity. However, it is unknown whether, conversely, the RNA viruses with the smallest genomes tend to show particularly high mutation rates. To test this, we measured the mutation rate of bacteriophage Qβ, a 4.2-kb levivirus. Amber reversion-based Luria–Delbrück fluctuation tests combined with mutant sequencing gave an estimate of 1.4 × 10 −4 substitutions per nucleotide per round of copying, the highest mutation rate reported for any virus using this method. This estimate was confirmed using a direct plaque sequencing approach and after reanalysis of previously published estimates for this phage. Comparison with other riboviruses (all RNA viruses except retroviruses) provided statistical support for a negative correlation between mutation rates and genome sizes. We suggest that the mutation rates of RNA viruses might be optimized for maximal adaptability and that the value of this optimum may in turn depend inversely on genome size.

Paul Sniegowski,  Philip Gerrish,  Richard Lenski (1997)
Most mutations are likely to be deleterious, and so the spontaneous mutation rate is generally held at a very low value. Nonetheless, evolutionary theory predicts that high mutation rates can evolve under certain circumstances. Empirical observations have previously been limited to short-term studies of the fates of mutator strains deliberately introduced into laboratory populations of Escherichia coli, and to the effects of intense selective events on mutator frequencies in E. coli. Here we report the rise of spontaneously originated mutators in populations of E. coli undergoing long-term adaptation to a new environment. Our results corroborate computer simulations of mutator evolution in adapting clonal populations, and may help to explain observations that associate high mutation rates with emerging pathogens and with certain cancers.

A constant rate of spontaneous mutation in DNA-based microbes.

W Drake (1991)
In terms of evolution and fitness, the most significant spontaneous mutation rate is likely to be that for the entire genome (or its nonfrivolous fraction). Information is now available to calculate this rate for several DNA-based haploid microbes, including bacteriophages with single- or double-stranded DNA, a bacterium, a yeast, and a filamentous fungus. Their genome sizes vary by approximately 6500-fold. Their average mutation rates per base pair vary by approximately 16,000-fold, whereas their mutation rates per genome vary by only approximately 2.5-fold, apparently randomly, around a mean value of 0.0033 per DNA replication. The average mutation rate per base pair is inversely proportional to genome size. Therefore, a nearly invariant microbial mutation rate appears to have evolved. Because this rate is uniform in such diverse organisms, it is likely to be determined by deep general forces, perhaps by a balance between the usually deleterious effects of mutation and the physiological costs of further reducing mutation rates.