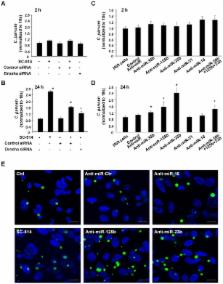 Cryptosporidium parvum is a protozoan parasite that infects the gastrointestinal epithelium and causes diarrheal disease worldwide. Innate epithelial immune responses are key mediators of the host's defense to C. parvum. MicroRNAs (miRNAs) regulate gene expression at the posttranscriptional level and are involved in regulation of both innate and adaptive immune responses. Using an in vitro model of human cryptosporidiosis, we analyzed C. parvum-induced miRNA expression in biliary epithelial cells (i.e., cholangiocytes). Our results demonstrated differential alterations in the mature miRNA expression profile in cholangiocytes following C. parvum infection or lipopolysaccharide stimulation. Database analysis of C. parvum-upregulated miRNAs revealed potential NF-κB binding sites in the promoter elements of a subset of miRNA genes. We demonstrated that mir-125b-1, mir-21, mir-30b, and mir-23b-27b-24-1 cluster genes were transactivated through promoter binding of the NF-κB p65 subunit following C. parvum infection. In contrast, C. parvum transactivated mir-30c and mir-16 genes in cholangiocytes in a p65-independent manner. Importantly, functional inhibition of selected p65-dependent miRNAs in cholangiocytes increased C. parvum burden. Thus, we have identified a panel of miRNAs regulated through promoter binding of the NF-κB p65 subunit in human cholangiocytes in response to C. parvum infection, a process that may be relevant to the regulation of epithelial anti-microbial defense in general.

MicroRNAs (miRNAs) are newly identified small non-coding RNAs that regulate gene expression at the posttranscriptional level. While much of our understanding of the cellular processes modulated by miRNAs has come from studies on development and tumorigenesis, the role of miRNAs in immune responses is now being gradually uncovered. Nevertheless, whether miRNA-mediated posttranscriptional gene regulation is involved in the fine-tuning of epithelial cell immune responses against pathogen infection remains undefined. Cryptosporidium parvum is a protozoan parasite that infects gastrointestinal epithelium. TLR/NF-κB-mediated innate immune responses by epithelial cells are critical to the host's defense to infection. Using an in vitro model of human cryptosporidiosis, we show here differential alterations in the miRNA expression profile in biliary epithelial cells following C. parvum infection. Promoter binding of NF-κB p65 subunit accounts for the upregulation of a panel of miRNA genes in cells infected by C. parvum. Importantly, functional inhibition of several NF-κB p65-dependent miRNAs in epithelial cells increases C. parvum infection burden. Our findings suggest that host epithelial cells activate NF-κB signaling to regulate miRNA expression in response to C. parvum infection. Moreover, NF-κB-mediated miRNA expression is involved in epithelial anti-microbial defense. Our study provides new insights into epithelial cell immunoregulation.

Jennifer Ashurst,  Allan Bradley,  Sam Griffiths-Jones … (2004)
To derive a global perspective on the transcription of microRNAs (miRNAs) in mammals, we annotated the genomic position and context of this class of noncoding RNAs (ncRNAs) in the human and mouse genomes. Of the 232 known mammalian miRNAs, we found that 161 overlap with 123 defined transcription units (TUs). We identified miRNAs within introns of 90 protein-coding genes with a broad spectrum of molecular functions, and in both introns and exons of 66 mRNA-like noncoding RNAs (mlncRNAs). In addition, novel families of miRNAs based on host gene identity were identified. The transcription patterns of all miRNA host genes were curated from a variety of sources illustrating spatial, temporal, and physiological regulation of miRNA expression. These findings strongly suggest that miRNAs are transcribed in parallel with their host transcripts, and that the two different transcription classes of miRNAs ('exonic' and 'intronic') identified here may require slightly different mechanisms of biogenesis.

G Frampton,  Sumeet Gupta,  Peter A S Johnstone … (2008)
MicroRNAs (miRNAs) are crucial for normal embryonic stem (ES) cell self-renewal and cellular differentiation, but how miRNA gene expression is controlled by the key transcriptional regulators of ES cells has not been established. We describe here the transcriptional regulatory circuitry of ES cells that incorporates protein-coding and miRNA genes based on high-resolution ChIP-seq data, systematic identification of miRNA promoters, and quantitative sequencing of short transcripts in multiple cell types. We find that the key ES cell transcription factors are associated with promoters for miRNAs that are preferentially expressed in ES cells and with promoters for a set of silent miRNA genes. This silent set of miRNA genes is co-occupied by Polycomb group proteins in ES cells and shows tissue-specific expression in differentiated cells. These data reveal how key ES cell transcription factors promote the ES cell miRNA expression program and integrate miRNAs into the regulatory circuitry controlling ES cell identity.

Human microRNAs are processed from capped, polyadenylated transcripts that can also function as mRNAs.

Curt H. Hagedorn,  Bryan R. Cullen,  X. Cai (2004)
The factors regulating the expression of microRNAs (miRNAs), a ubiquitous family of approximately 22-nt noncoding regulatory RNAs, remain undefined. However, it is known that miRNAs are first transcribed as a largely unstructured precursor, termed a primary miRNA (pri-miRNA), which is sequentially processed in the nucleus, to give the approximately 65-nt pre-miRNA hairpin intermediate, and then in the cytoplasm, to give the mature miRNA. Here we have sought to identify the RNA polymerase responsible for miRNA transcription and to define the structure of a full-length human miRNA. We show that the pri-miRNA precursors for nine human miRNAs are both capped and polyadenylated and report the sequence of the full-length, approximately 3433-nt pri-miR-21 RNA. This pri-miR-21 gene sequence is flanked 5' by a promoter element able to transcribe heterologous mRNAs and 3' by a consensus polyadenylation sequence. Nuclear processing of pri-miRNAs was found to be efficient, thus largely preventing the nuclear export of full-length pri-miRNAs. Nevertheless, an intact miRNA stem-loop precursor located in the 3' UTR of a protein coding gene only moderately inhibited expression of the linked open reading frame, probably because the 3' truncated mRNA could still be exported and expressed. Together, these data show that human pri-miRNAs are not only structurally similar to mRNAs but can, in fact, function both as pri-miRNAs and mRNAs.

Publisher ID: 09-PLPA-RA-0905R3
DOI: 10.1371/journal.ppat.1000681
PMC ID: 2778997
PubMed ID: 19997496
Copyright statement: Zhou et al. This is an open-access article distributed under the terms of the Creative Commons Attribution License, which permits unrestricted use, distribution, and reproduction in any medium, provided the original author and source are credited.