Pomalidomide in the treatment of multiple myeloma: design, development and place in therapy 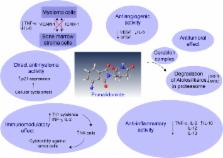 Multiple myeloma is a very heterogeneous disease with variable survival. Despite recent progress and the widespread use of new agents, patients with relapsed and refractory disease have a poor outcome. Immunomodulatory drugs play a key role in both the front-line and the relapsed/refractory setting. The combination of pomalidomide (POM) and dexamethasone is safe and effective in relapsed and refractory patients, even in those with high-risk cytogenetic features. Furthermore, it can be used in most patients without the need to adjust according to the degree of renal failure. In order to further improve the results, POM-based triplet therapies are currently used. This article highlights the most relevant issues of POM and POM-based combinations in the relapsed/refractory multiple myeloma setting, from a pharmacological and clinical point of view.

Curing myeloma at last: defining criteria and providing the evidence.

Bart Barlogie,  Alan Mitchell,  Frits Rhee … (2014)
Does the dogma that multiple myeloma is incurable still hold?. The genomic chaos and resulting resistance to apoptosis of myeloma, long considered an obstacle to cure, formed the basis of Total Therapy (TT) program. The TT approach uses all myeloma-active drugs upfront to target drug-resistant subclones during initial treatment to prevent later relapse. Long-term follow-up of 1202 patients (TT1: n = 231, median follow-up: 21 years; TT2: 668, median follow-up: 12 years; TT3a: n = 303, median follow-up: 9 years) permitted investigation of whether progression-free survival (PFS) and complete response (CR) duration were consistent with curability, ie observation of plateaus in Kaplan-Meier plots for PFS and CR duration. In the subset of 627 patients with plasma cell gene expression profiling data, cure plateaus were apparent at 5 years in the 14% with high-risk myeloma compared with 10 years in the remainder with low-risk disease. A parametric model based on PFS and CR duration supported an increase in curability: 10-year PFS and CR estimates increased from 8.8%/17.9% in TT1 to 15.5%/28.2% in TT2's control arm to 25.1%/35.6% in TT2's thalidomide arm and to 32.9%/48.8% in TT3a. Toward developing novel therapies, we recommend a concerted focus on patients with high-risk myeloma whose outcome has not been advanced.

New drugs and novel mechanisms of action in multiple myeloma in 2013: a report from the International Myeloma Working Group (IMWG).

E Ocio,  P G Richardson,  S Rajkumar … (2014)
Treatment in medical oncology is gradually shifting from the use of nonspecific chemotherapeutic agents toward an era of novel targeted therapy in which drugs and their combinations target specific aspects of the biology of tumor cells. Multiple myeloma (MM) has become one of the best examples in this regard, reflected in the identification of new pathogenic mechanisms, together with the development of novel drugs that are being explored from the preclinical setting to the early phases of clinical development. We review the biological rationale for the use of the most important new agents for treating MM and summarize their clinical activity in an increasingly busy field. First, we discuss data from already approved and active agents (including second- and third-generation proteasome inhibitors (PIs), immunomodulatory agents and alkylators). Next, we focus on agents with novel mechanisms of action, such as monoclonal antibodies (MoAbs), cell cycle-specific drugs, deacetylase inhibitors, agents acting on the unfolded protein response, signaling transduction pathway inhibitors and kinase inhibitors. Among this plethora of new agents or mechanisms, some are specially promising: anti-CD38 MoAb, such as daratumumab, are the first antibodies with clinical activity as single agents in MM. Moreover, the kinesin spindle protein inhibitor Arry-520 is effective in monotherapy as well as in combination with dexamethasone in heavily pretreated patients. Immunotherapy against MM is also being explored, and probably the most attractive example of this approach is the combination of the anti-CS1 MoAb elotuzumab with lenalidomide and dexamethasone, which has produced exciting results in the relapsed/refractory setting.

J Mikhael,  Jacob Allred,  K Laumann … (2009)
Thalidomide and lenalidomide are immunomodulatory drugs (IMiDs) that produce high remission rates in the treatment of multiple myeloma. Pomalidomide is a new IMiD with high in vitro potency. We report, to our knowledge, the first phase II trial of pomalidomide administered in combination with low-dose dexamethasone for the treatment of relapsed or refractory multiple myeloma. Pomalidomide was administered orally at a dose of 2 mg daily on days 1 through 28 of a 28-day cycle. Dexamethasone 40 mg daily was administered orally on days 1, 8, 15, and 22 of each cycle. Responses were recorded using the criteria of the International Myeloma Working Group. Sixty patients were enrolled. Thirty-eight patients (63%) achieved confirmed response including complete response in three patients (5%), very good partial response in 17 patients (28%), and partial response in 18 patients (30%). Responses were seen in 40% of lenalidomide-refractory patients, 37% of thalidomide-refractory patients, and 60% of bortezomib-refractory patients. Responses were seen in 74% of patients with high-risk cytogenetic or molecular markers. Toxicity consisted primarily of myelosuppression. Grade 3 or 4 hematologic toxicity consisted of anemia (5%), thrombocytopenia (3%), and neutropenia (32%). One patient (1.6%) had a thromboembolic event. The median progression-free survival time was 11.6 months and was not significantly different in patients with high-risk disease compared with patients with standard-risk disease. The combination of pomalidomide and low-dose dexamethasone is extremely active in the treatment of relapsed multiple myeloma, including high response rates in patients refractory to other novel agents.