Glutamate and GABA in Appetite Regulation 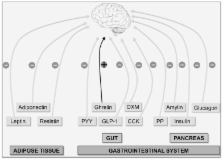 Appetite is regulated by a coordinated interplay between gut, adipose tissue, and brain. A primary site for the regulation of appetite is the hypothalamus where interaction between orexigenic neurons, expressing Neuropeptide Y/Agouti-related protein, and anorexigenic neurons, expressing Pro-opiomelanocortin cocaine/Amphetamine-related transcript, controls energy homeostasis. Within the hypothalamus, several peripheral signals have been shown to modulate the activity of these neurons, including the orexigenic peptide ghrelin and the anorexigenic hormones insulin and leptin. In addition to the accumulated knowledge on neuropeptide signaling, presence and function of amino acid neurotransmitters in key hypothalamic neurons brought a new light into appetite regulation. Therefore, the principal aim of this review will be to describe the current knowledge of the role of amino acid neurotransmitters in the mechanism of neuronal activation during appetite regulation and the associated neuronal-astrocytic metabolic coupling mechanisms. Glutamate and GABA dominate synaptic transmission in the hypothalamus and administration of their receptors agonists into hypothalamic nuclei stimulates feeding. By using 13C High-Resolution Magic Angle Spinning Nuclear Magnetic Resonance spectroscopy based analysis, the Cerdán group has shown that increased neuronal firing in mice hypothalamus, as triggered by appetite during the feeding-fasting paradigm, may stimulate the use of lactate as neuronal fuel leading to increased astrocytic glucose consumption and glycolysis. Moreover, fasted mice showed increased hypothalamic [2- 13C]GABA content, which may be explained by the existence of GABAergic neurons in key appetite regulation hypothalamic nuclei. Interestingly, increased [2- 13C]GABA concentration in the hypothalamus of fasted animals appears to result mainly from reduction in GABA metabolizing pathways, rather than increased GABA synthesis by augmented activity of the glutamate-glutamine-GABA cycle.

P Magistretti,  L Pellerin (1994)
Glutamate, released at a majority of excitatory synapses in the central nervous system, depolarizes neurons by acting at specific receptors. Its action is terminated by removal from the synaptic cleft mostly via Na(+)-dependent uptake systems located on both neurons and astrocytes. Here we report that glutamate, in addition to its receptor-mediated actions on neuronal excitability, stimulates glycolysis--i.e., glucose utilization and lactate production--in astrocytes. This metabolic action is mediated by activation of a Na(+)-dependent uptake system and not by interaction with receptors. The mechanism involves the Na+/K(+)-ATPase, which is activated by an increase in the intracellular concentration of Na+ cotransported with glutamate by the electrogenic uptake system. Thus, when glutamate is released from active synapses and taken up by astrocytes, the newly identified signaling pathway described here would provide a simple and direct mechanism to tightly couple neuronal activity to glucose utilization. In addition, glutamate-stimulated glycolysis is consistent with data obtained from functional brain imaging studies indicating local nonoxidative glucose utilization during physiological activation.

Luc Pellerin,  Pierre Magistretti (2012)
Since its introduction 16 years ago, the astrocyte-neuron lactate shuttle (ANLS) model has profoundly modified our understanding of neuroenergetics by bringing a cellular and molecular resolution. Praised or disputed, the concept has never ceased to attract attention, leading to critical advances and unexpected insights. Here, we summarize recent experimental evidence further supporting the main tenets of the model. Thus, evidence for distinct metabolic phenotypes between neurons (mainly oxidative) and astrocytes (mainly glycolytic) have been provided by genomics and classical metabolic approaches. Moreover, it has become clear that astrocytes act as a syncytium to distribute energy substrates such as lactate to active neurones. Glycogen, the main energy reserve located in astrocytes, is used as a lactate source to sustain glutamatergic neurotransmission and synaptic plasticity. Lactate is also emerging as a neuroprotective agent as well as a key signal to regulate blood flow. Characterization of monocarboxylate transporter regulation indicates a possible involvement in synaptic plasticity and memory. Finally, several modeling studies captured the implications of such findings for many brain functions. The ANLS model now represents a useful, experimentally based framework to better understand the coupling between neuronal activity and energetics as it relates to neuronal plasticity, neurodegeneration, and functional brain imaging.

Activity-dependent regulation of energy metabolism by astrocytes: an update.

Anne-Karine Bouzier-Sore,  R Costalat,  Agnes Aubert … (2007)
Astrocytes play a critical role in the regulation of brain metabolic responses to activity. One detailed mechanism proposed to describe the role of astrocytes in some of these responses has come to be known as the astrocyte-neuron lactate shuttle hypothesis (ANLSH). Although controversial, the original concept of a coupling mechanism between neuronal activity and glucose utilization that involves an activation of aerobic glycolysis in astrocytes and lactate consumption by neurons provides a heuristically valid framework for experimental studies. In this context, it is necessary to provide a survey of recent developments and data pertaining to this model. Thus, here, we review very recent experimental evidence as well as theoretical arguments strongly supporting the original model and in some cases extending it. Aspects revisited include the existence of glutamate-induced glycolysis in astrocytes in vitro, ex vivo, and in vivo, lactate as a preferential oxidative substrate for neurons, and the notion of net lactate transfer between astrocytes and neurons in vivo. Inclusion of a role for glycogen in the ANLSH is discussed in the light of a possible extension of the astrocyte-neuron lactate shuttle (ANLS) concept rather than as a competing hypothesis. New perspectives offered by the application of this concept include a better understanding of the basis of signals used in functional brain imaging, a role for neuron-glia metabolic interactions in glucose sensing and diabetes, as well as novel strategies to develop therapies against neurodegenerative diseases based upon improving astrocyte-neuron coupled energetics.

Edited by: Tiago B. Rodrigues, University of Cambridge, UK