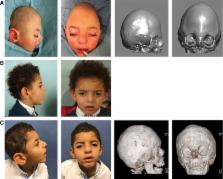 Turricephaly is considered one of the most difficult cranial deformities to correct as addressing cranial height can result in increased intracranial pressure. We describe a new technique of total calvarial remodeling with bony transposition to simultaneously correct turricephaly and brachycephaly while preserving intracranial volume.

A retrospective review of patients undergoing single-stage cranial vault remodeling by a single surgeon (J.G.M.) at a single center between 2007 and 2015 was performed. The procedure consists of a frontal bandeau followed by a 1 cm 360 o axial strip craniectomy. The strip is then rotated 90 degrees into a coronal orientation and interposed between fronto-parietal and parito-occipital segments. Modification for occipital widening can also be performed.

Six patients with turribrachycephaly underwent the procedure over the 8-year period. Four patients were operated at less than 1 year of age, one patient underwent surgery at 2 years, and one at 9 years. Mean operative time was 4 hours, and mean transfusion was 300cc. There were no major complications. Mean cranial height reduction achieved was 1.6 cm (range, 1.0–2.0 cm), and mean anterior–posterior expansion was 3.4 cm (range, 2.3–4.5 cm). Patients also showed improvement in supraorbital retrusion.

Single-stage cranial vault remodeling with axial strip craniectomy and coronal interposition is safe and allows for simultaneous correction of turricephaly and brachycephaly while preserving intracranial volume.

Hiroshi Nishikawa,  Nicholas White,  Peter Noons … (2009)
Management of raised intracranial pressure in syndromic multi-suture craniosynostosis by cranial vault expansion can be achieved by a number of techniques. We present our initial experience in treating this group of patients with posterior calvarial distraction. Six patients underwent distraction osteogenesis of their posterior calvarial vault. The mean period of distraction was 28 days. The mean consolidation period was 49 days. The mean distance of advancement was 24 mm. Five out of six patients completed their period of distraction and three of these cases also completed their period of consolidation. Significant calvarial expansion and improvement of head shape was achieved in all cases. Posterior calvarial distraction is a safe and more efficient method of calvarial expansion than conventional techniques. These are early promising results, and future modification of the distraction devices will be needed if the effective consolidation time is to be increased.

P. Bartlett,  Derek M. Steinbacher,  Jacek Puchała … (2011)
Expansion of the posterior cranial vault more profoundly enlarges intracranial volume compared with the anterior region. Conventional vault remodeling techniques are limited by scalp forces and may relapse with supine positioning. The purpose of this study was to demonstrate the efficacy of posterior vault distraction and evaluate perioperative variables compared with conventional methods in syndromic children. This was a retrospective analysis of consecutive children who underwent posterior vault expansion using distraction osteogenesis. Information was compiled regarding demographics, perioperative details, distraction protocol, and complications. Eight children were identified, two boys and six girls. Diagnoses of Apert, Crouzon, Saethre-Chotzen, and Pfeiffer syndromes were present. Chiari malformation was present in two children. The posterior distraction procedure was undertaken at a mean of 21 months (range, 5 to 36 months). Mean operative time was 3.8 hours (range, 2.6 to 5 hours), blood loss averaged 487 ml (range, 300 to 2000 ml), and hospital stay was 3.25 days (range, 2 to 4 days). A latency period of 72 hours and rate of 2/3 mm/day was used in three patients, and 1 mm/day was used in five children. The mean advancement was 23 mm (range, 19 to 32 mm) and consolidation was 77 days (range, 42 to 100 days). One child experienced fracture of distraction arms during the activation period. Mean follow-up was 278 days (range, 90 to 548 days). These preliminary findings indicate that posterior vault distraction is a viable technique with a favorable perioperative profile compared with conventional treatment. Posterior distraction can be the initial strategy with which to address intracranial pressure, allowing delay of definitive frontoorbital advancement until later in childhood.

D Marchac (1978)
A normal forehead has two parts, shaped differently: (1) the lower part (corresponding to the supraorbital rim and glabellar area) set at a steep angle to the nose; (2) the upper part, sloping gently backward. To reproduce this normal anatomy in cases of cranostenosis affecting the frontal area, we found it essential to mobilize and reshape a supraorbital bar of bone and to transfer a suitable piece of the cranial vault in one piece to make a new upper forehead. By this method we have treated 18 patients with oxycephaly since 1973, with good results. We have also operated on babies with craniostenosis to try to solve simultaneously the functional and the cosmetic problems. In faciocraniostenosis, there are dominant malformations at the base of the skull, but an isolated frontal advancement of two cm has produced gratifying early results.

This is an open-access article distributed under the terms of the Creative Commons Attribution-Non Commercial-No Derivatives License 4.0 (CCBY-NC-ND), where it is permissible to download and share the work provided it is properly cited. The work cannot be changed in any way or used commercially without permission from the journal.