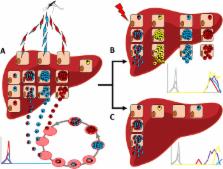 Plasmodium vivax parasites have a unique dormant stage that can cause relapses weeks or months after the initial infection. These dormant parasites are among the main challenges of vivax malaria control as they constitute a reservoir that is difficult to eliminate. Since field studies are confounded by reinfections and possible recrudescence of drug-resistant parasites, most analyses of P. vivax relapses have focused on travelers returning from regions of malaria endemicity. However, it is not clear whether these individuals accurately recapitulate the relapse patterns of repeatedly infected individuals residing in areas of endemicity. Here, we present analyses of vivax malaria patients enrolled in a tightly controlled field study in Cambodia. After antimalarial drug treatment was administered, we relocated 20 individuals to a nontransmission area and followed them for 60 days, with blood collection performed every second day. Our analyses reveal that 60% of the patients relapsed during the monitoring period. Using whole-genome sequencing and high-throughput genotyping, we showed that relapses in Cambodia are often polyclonal and that the relapsing parasites harbor various degrees of relatedness to the parasites present in the initial infection. Our analyses also showed that clone populations differed dynamically, with new clones emerging during the course of the relapsing infections. Overall, our study data show that it is possible to investigate the patterns, dynamics, and diversity of P. vivax relapses of individuals living in a region of malaria endemicity and reveal that P. vivax relapses are much more pervasive and complex than previously considered. (This study has been registered at ClinicalTrials.gov under registration no. NCT02118090.)

P. vivax parasites can remain dormant in the liver and relapse weeks or months after the initial infection, greatly complicating malaria control and elimination efforts. The few investigations of this dormant stage have relied on travelers and military personnel returning from areas of malaria endemicity. However, it is not clear whether these individuals, exposed to a limited number of infections, accurately represent the patterns of relapses of individuals living in areas of endemicity, who are repeatedly infected by P. vivax parasites. Our study combined tightly controlled fieldwork with comprehensive genomic analyses, and our report provides a first opportunity to investigate the patterns, dynamics, and diversity of P. vivax relapses directly with individuals living in areas of endemicity.

Jane Carlton,  John H. Adams,  Joana C. Silva … (2008)
The human malaria parasite Plasmodium vivax is responsible for 25-40% of the approximately 515 million annual cases of malaria worldwide. Although seldom fatal, the parasite elicits severe and incapacitating clinical symptoms and often causes relapses months after a primary infection has cleared. Despite its importance as a major human pathogen, P. vivax is little studied because it cannot be propagated continuously in the laboratory except in non-human primates. We sequenced the genome of P. vivax to shed light on its distinctive biological features, and as a means to drive development of new drugs and vaccines. Here we describe the synteny and isochore structure of P. vivax chromosomes, and show that the parasite resembles other malaria parasites in gene content and metabolic potential, but possesses novel gene families and potential alternative invasion pathways not recognized previously. Completion of the P. vivax genome provides the scientific community with a valuable resource that can be used to advance investigation into this neglected species.