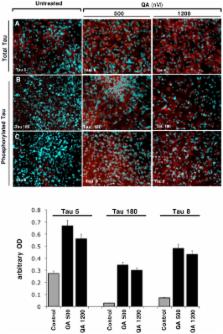 Some of the tryptophan catabolites produced through the kynurenine pathway (KP), and more particularly the excitotoxin quinolinic acid (QA), are likely to play a role in the pathogenesis of Alzheimer's disease (AD). We have previously shown that the KP is over activated in AD brain and that QA accumulates in amyloid plaques and within dystrophic neurons. We hypothesized that QA in pathophysiological concentrations affects tau phosphorylation. Using immunohistochemistry, we found that QA is co-localized with hyperphosphorylated tau (HPT) within cortical neurons in AD brain. We then investigated in vitro the effects of QA at various pathophysiological concentrations on tau phosphorylation in primary cultures of human neurons. Using western blot, we found that QA treatment increased the phosphorylation of tau at serine 199/202, threonine 231 and serine 396/404 in a dose dependent manner. Increased accumulation of phosphorylated tau was also confirmed by immunocytochemistry. This increase in tau phosphorylation was paralleled by a substantial decrease in the total protein phosphatase activity. A substantial decrease in PP2A expression and modest decrease in PP1 expression were observed in neuronal cultures treated with QA. These data clearly demonstrate that QA can induce tau phosphorylation at residues present in the PHF in the AD brain. To induce tau phosphorylation, QA appears to act through NMDA receptor activation similar to other agonists, glutamate and NMDA. The QA effect was abrogated by the NMDA receptor antagonist memantine. Using PCR arrays, we found that QA significantly induces 10 genes in human neurons all known to be associated with AD pathology. Of these 10 genes, 6 belong to pathways involved in tau phosphorylation and 4 of them in neuroprotection. Altogether these results indicate a likely role of QA in the AD pathology through promotion of tau phosphorylation. Understanding the mechanism of the neurotoxic effects of QA is essential in developing novel therapeutic strategies for AD.

Angela Throm Quinlan,  Loraine Tung,  L. Binder … (1986)
A monoclonal antibody to the microtubule-associated protein tau (tau) labeled some neurofibrillary tangles and plaque neurites, the two major locations of paired-helical filaments (PHF), in Alzheimer disease brain. The antibody also labeled isolated PHF that had been repeatedly washed with NaDodSO4. Dephosphorylation of the tissue sections with alkaline phosphatase prior to immunolabeling dramatically increased the number of tangles and plaques recognized by the antibody. The plaque core amyloid was not stained in either dephosphorylated or nondephosphorylated tissue sections. On immunoblots PHF polypeptides were labeled readily only when dephosphorylated. In contrast, a commercially available monoclonal antibody to a phosphorylated epitope of neurofilaments that labeled the tangles and the plaque neurites in tissue did not label any PHF polypeptides on immunoblots. The PHF polypeptides, labeled with the monoclonal antibody to tau, electrophoresed with those polypeptides recognized by antibodies to isolated PHF. The antibody to tau-labeled microtubules from normal human brains assembled in vitro but identically treated Alzheimer brain preparations had to be dephosphorylated to be completely recognized by this antibody. These findings suggest that tau in Alzheimer brain is an abnormally phosphorylated protein component of PHF.

,  Steven Ferris,  Hans Jörg Möbius … (2003)
Overstimulation of the N-methyl-D-aspartate (NMDA) receptor by glutamate is implicated in neurodegenerative disorders. Accordingly, we investigated memantine, an NMDA antagonist, for the treatment of Alzheimer's disease. Patients with moderate-to-severe Alzheimer's disease were randomly assigned to receive placebo or 20 mg of memantine daily for 28 weeks. The primary efficacy variables were the Clinician's Interview-Based Impression of Change Plus Caregiver Input (CIBIC-Plus) and the Alzheimer's Disease Cooperative Study Activities of Daily Living Inventory modified for severe dementia (ADCS-ADLsev). The secondary efficacy end points included the Severe Impairment Battery and other measures of cognition, function, and behavior. Treatment differences between base line and the end point were assessed. Missing observations were imputed by using the most recent previous observation (the last observation carried forward). The results were also analyzed with only the observed values included, without replacing the missing values (observed-cases analysis). Two hundred fifty-two patients (67 percent women; mean age, 76 years) from 32 U.S. centers were enrolled. Of these, 181 (72 percent) completed the study and were evaluated at week 28. Seventy-one patients discontinued treatment prematurely (42 taking placebo and 29 taking memantine). Patients receiving memantine had a better outcome than those receiving placebo, according to the results of the CIBIC-Plus (P=0.06 with the last observation carried forward, P=0.03 for observed cases), the ADCS-ADLsev (P=0.02 with the last observation carried forward, P=0.003 for observed cases), and the Severe Impairment Battery (P<0.001 with the last observation carried forward, P=0.002 for observed cases). Memantine was not associated with a significant frequency of adverse events. Antiglutamatergic treatment reduced clinical deterioration in moderate-to-severe Alzheimer's disease, a phase associated with distress for patients and burden on caregivers, for which other treatments are not available. Copyright 2003 Massachusetts Medical Society

Publisher ID: 09-PONE-RA-09484R1
DOI: 10.1371/journal.pone.0006344
PMC ID: 2709912
PubMed ID: 19623258
Copyright statement: Rahman et al. This is an open-access article distributed under the terms of the Creative Commons Attribution License, which permits unrestricted use, distribution, and reproduction in any medium, provided the original author and source are credited.