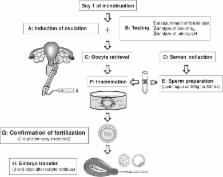 Assisted reproductive technology (ART) such as in vitro fertilization (IVF) and embryo transfer (ET) has been essential in the treatment of infertility. The world’s first IVF-ET baby was born in 1978 based on the technique developed by Dr. Robert Edwards and Dr. Patrick Steptoe. 1) In Japan, the first IVF-ET birth was reported in 1983 by Prof. Masakuni Suzuki at Tohoku University School of Medicine. 2, 3)

IVF-ET is a procedure used to achieve pregnancy that consists of extracting oocytes from an infertile woman, fertilizing them in vitro, and transferring fertilized eggs into the patient’s uterine cavity (Fig. 1). Since the first report of successful IVF-ET, numerous techniques related to ART, such as cryopreservation of oocytes and embryos, gamete intrafallopian transfer (GIFT), and microinsemination, have been developed and refined (Table 1).

Herein we describe the history of basic research in IVF-ET that led to human applications, how the birth of the first IVF-ET baby was achieved in Japan, the current status of ART in Japan, issues related to ART, and future prospects for ART.

Pregnancies after intracytoplasmic injection of single spermatozoon into an oocyte.

Kiliaan van Wees,  H Joris,  P. Devroey … (1992)
Intracytoplasmic sperm injection (ICSI) is a promising assisted-fertilisation technique that may benefit women who have not become pregnant by in-vitro fertilisation (IVF) or subzonal insemination (SUZI) of oocytes. We have used ICSI to treat couples with infertility because of severely impaired sperm characteristics, and in whom IVF and SUZI had failed. Direct injection of a single spermatozoon into the ooplasm was done in 47 metaphase-II oocytes: 38 oocytes remained intact after injection, 31 became fertilised, and 15 embryos were replaced in utero. Four pregnancies occurred after eight treatment cycles--two singleton and one twin pregnancy, and a preclinical abortion. Two healthy boys have been delivered from the singleton pregnancies and a healthy boy and girl from the twin pregnancy.

W Weidner,  W Hartschuh,  C. Ramos … (1996)
In a large collaborative screening project, 370 men with idiopathic azoospermia or severe oligozoospermia were analysed for deletions of 76 DNA loci in Yq11. In 12 individuals, we observed de novo microdeletions involving several DNA loci, while an additional patient had an inherited deletion. They were mapped to three different subregions in Yq11. One subregion coincides to the AZF region defined recently in distal Yq11. The second and third subregion were mapped proximal to it, in proximal and middle Yq11, respectively. The different deletions observed were not overlapping but the extension of the deleted Y DNA in each subregion was similar in each patient analysed. In testis tissue sections, disruption of spermatogenesis was shown to be at the same phase when the microdeletion occurred in the same Yq11 subregion but at a different phase when the microdeletion occurred in a different Yq11 subregion. Therefore, we propose the presence of not one but three spermatogenesis loci in Yq11 and that each locus is active during a different phase of male germ cell development. As the most severe phenotype after deletion of each locus is azoospermia, we designated them as: AZFa, AZFb and AZFc. Their probable phase of function in human spermatogenesis and candidate genes involved will be discussed.

Fertilizing capacity of spermatozoa deposited into the fallopian tubes.