Hypoxia-Inducible Factor-1 in Physiological and Pathophysiological Angiogenesis: Applications and Therapies 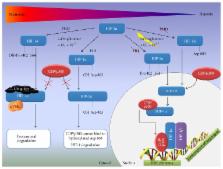 The cardiovascular system ensures the delivery of oxygen and nutrients to all cells, tissues, and organs. Under extended exposure to reduced oxygen levels, cells are able to survive through the transcriptional activation of a series of genes that participate in angiogenesis, glucose metabolism, and cell proliferation. The oxygen-sensitive transcriptional activator HIF-1 (hypoxia-inducible factor-1) is a key transcriptional mediator of the response to hypoxic conditions. The HIF-1 pathway was found to be a master regulator of angiogenesis. Whether the process is physiological or pathological, HIF-1 seems to participate in vasculature formation by synergistic correlations with other proangiogenic factors such as VEGF (vascular endothelial growth factor), PlGF (placental growth factor), or angiopoietins. Considering the important contributions of HIF-1 in angiogenesis and vasculogenesis, it should be considered a promising target for treating ischaemic diseases or cancer. In this review, we discuss the roles of HIF-1 in both physiological/pathophysiological angiogenesis and potential strategies for clinical therapy.

J Holash,  G Yancopoulos,  S. Davis … (2000)
A recent explosion in newly discovered vascular growth factors has coincided with exploitation of powerful new genetic approaches for studying vascular development. An emerging rule is that all of these factors must be used in perfect harmony to form functional vessels. These new findings also demand re-evaluation of therapeutic efforts aimed at regulating blood vessel growth in ischaemia, cancer and other pathological settings.

A nuclear factor induced by hypoxia via de novo protein synthesis binds to the human erythropoietin gene enhancer at a site required for transcriptional activation.

G. L. Semenza,  G. L. Wang (1992)
We have identified a 50-nucleotide enhancer from the human erythropoietin gene 3'-flanking sequence which can mediate a sevenfold transcriptional induction in response to hypoxia when cloned 3' to a simian virus 40 promoter-chloramphenicol acetyltransferase reporter gene and transiently expressed in Hep3B cells. Nucleotides (nt) 1 to 33 of this sequence mediate sevenfold induction of reporter gene expression when present in two tandem copies compared with threefold induction when present in a single copy, suggesting that nt 34 to 50 bind a factor which amplifies the induction signal. DNase I footprinting demonstrated binding of a constitutive nuclear factor to nt 26 to 48. Mutagenesis studies revealed that nt 4 to 12 and 19 to 23 are essential for induction, as substitutions at either site eliminated hypoxia-induced expression. Electrophoretic mobility shift assays identified a nuclear factor which bound to a probe spanning nt 1 to 18 but not to a probe containing a mutation which eliminated enhancer function. Factor binding was induced by hypoxia, and its induction was sensitive to cycloheximide treatment. We have thus defined a functionally tripartite, 50-nt hypoxia-inducible enhancer which binds several nuclear factors, one of which is induced by hypoxia via de novo protein synthesis.

R Jain (2003)
The maturation of nascent vasculature, formed by vasculogenesis or angiogenesis, requires recruitment of mural cells, generation of an extracellular matrix and specialization of the vessel wall for structural support and regulation of vessel function. In addition, the vascular network must be organized so that all the parenchymal cells receive adequate nutrients. All of these processes are orchestrated by physical forces as well as by a constellation of ligands and receptors whose spatio-temporal patterns of expression and concentration are tightly regulated. Inappropriate levels of these physical forces or molecules produce an abnormal vasculature--a hallmark of various pathologies. Normalization of the abnormal vasculature can facilitate drug delivery to tumors and formation of a mature vasculature can help realize the promise of therapeutic angiogenesis and tissue engineering.