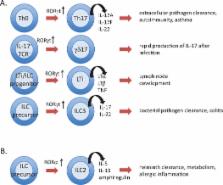 In this overview, we provide an update on recent progress made in understanding the mechanisms of action, physiological functions, and roles in disease of retinoic acid related orphan receptors (RORs). We are particularly focusing on their roles in the regulation of adaptive and innate immunity, brain function, retinal development, cancer, glucose and lipid metabolism, circadian rhythm, metabolic and inflammatory diseases and neuropsychiatric disorders. We also summarize the current status of ROR agonists and inverse agonists, including their regulation of ROR activity and their therapeutic potential for management of various diseases in which RORs have been implicated.

Gökhan S. Hotamisligil (2006)
Metabolic and immune systems are among the most fundamental requirements for survival. Many metabolic and immune response pathways or nutrient- and pathogen-sensing systems have been evolutionarily conserved throughout species. As a result, immune response and metabolic regulation are highly integrated and the proper function of each is dependent on the other. This interface can be viewed as a central homeostatic mechanism, dysfunction of which can lead to a cluster of chronic metabolic disorders, particularly obesity, type 2 diabetes and cardiovascular disease. Collectively, these diseases constitute the greatest current threat to global human health and welfare.

Vijay K. Kuchroo,  Wenda Gao,  Yijun Carrier … (2006)
On activation, T cells undergo distinct developmental pathways, attaining specialized properties and effector functions. T-helper (T(H)) cells are traditionally thought to differentiate into T(H)1 and T(H)2 cell subsets. T(H)1 cells are necessary to clear intracellular pathogens and T(H)2 cells are important for clearing extracellular organisms. Recently, a subset of interleukin (IL)-17-producing T (T(H)17) cells distinct from T(H)1 or T(H)2 cells has been described and shown to have a crucial role in the induction of autoimmune tissue injury. In contrast, CD4+CD25+Foxp3+ regulatory T (T(reg)) cells inhibit autoimmunity and protect against tissue injury. Transforming growth factor-beta (TGF-beta) is a critical differentiation factor for the generation of T(reg) cells. Here we show, using mice with a reporter introduced into the endogenous Foxp3 locus, that IL-6, an acute phase protein induced during inflammation, completely inhibits the generation of Foxp3+ T(reg) cells induced by TGF-beta. We also demonstrate that IL-23 is not the differentiation factor for the generation of T(H)17 cells. Instead, IL-6 and TGF-beta together induce the differentiation of pathogenic T(H)17 cells from naive T cells. Our data demonstrate a dichotomy in the generation of pathogenic (T(H)17) T cells that induce autoimmunity and regulatory (Foxp3+) T cells that inhibit autoimmune tissue injury.

Meng Zhou,  Carlos E Tadokoro,  Alice Lepelley … (2006)
IL-17-producing T lymphocytes have been recently shown to comprise a distinct lineage of proinflammatory T helper cells, termed Th17 cells, that are major contributors to autoimmune disease. We show here that the orphan nuclear receptor RORgammat is the key transcription factor that orchestrates the differentiation of this effector cell lineage. RORgammat induces transcription of the genes encoding IL-17 and the related cytokine IL-17F in naïve CD4(+) T helper cells and is required for their expression in response to IL-6 and TGF-beta, the cytokines known to induce IL-17. Th17 cells are constitutively present throughout the intestinal lamina propria, express RORgammat, and are absent in mice deficient for RORgammat or IL-6. Mice with RORgammat-deficient T cells have attenuated autoimmune disease and lack tissue-infiltrating Th17 cells. Together, these studies suggest that RORgammat is a key regulator of immune homeostasis and highlight its potential as a therapeutic target in inflammatory diseases.