Copeptin, a Surrogate Marker for Arginine Vasopressin, Is Associated With Cardiovascular and All-Cause Mortality in Patients With Type 2 Diabetes (ZODIAC-31) 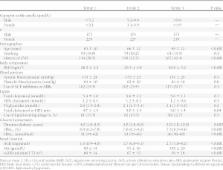 Copeptin, a surrogate marker for arginine vasopressin, has been associated with cardiovascular (CV) events and mortality in patients with type 2 diabetes complicated by end-stage renal disease or acute myocardial infarction. For stable outpatients, these associations are unknown. Our aim was to investigate whether copeptin is associated with CV and all-cause mortality in patients with type 2 diabetes treated in primary care.

We found copeptin to be associated with CV and all-cause mortality in patients with type 2 diabetes treated in primary care. Intervention studies should show whether the high CV risk in type 2 diabetes can be reduced by suppression of vasopressin, for example by reducing salt intake.

Eric Lam,  Vincent W T Lam,  Derek LeRoith (2012)
An overview of the global epidemic of diabetes and its impact on the understanding of the disease. Once thought of as a disease of the West, the prevalence of diabetes mellitus is increasing at alarming rates in many other areas of the world. In recent years, significant attention has been placed on the growing Asian diabetes epidemic. As a result, the medical community has come to understand that previously defined risk factors, particularly BMI, may not be applicable to the global community. The heterogeneity of the disease has been demonstrated both through anthropometric and genetic studies. Despite this heterogeneity, some treatments, particularly lifestyle interventions, have been found to have an ethnic nonspecific positive impact on the disease. Diabetes promises to become an even larger public health issue with significant social and economic burden with clinical practice and public health policy implications. Further population studies and identification of ethnic specific risk factors will guide research to develop a better understanding of the disease.

Plasma copeptin, a unifying factor behind the metabolic syndrome.

Nils Morgenthaler,  Bo Hedblad,  Joachim Struck … (2011)
Arginine vasopressin (AVP) is known to affect liver glycogenolysis, insulin, and glucagon secretion and pituitary ACTH release. We previously showed that high copeptin, the stable C-terminal fragment of AVP prohormone, is independently associated with hyperinsulinemia and future development of diabetes mellitus. The objective of the study was to examine whether plasma copeptin is associated with components of the metabolic syndrome (MetS) independently of insulin, diabetes mellitus, and environmental factors. This was a cross-sectional, population-based sample of 4742 subjects, aged 46-68 yr, 60% women, in Malmö, Sweden. Using multivariable logistic and linear regression, plasma copeptin was associated with components of the MetS. Copeptin quartile (lowest quartile as reference) was, after adjustment for age, sex, insulin, and diabetes mellitus, associated with hypertension (odds ratios 1.04, 1.07, 1.31; P = 0.004), abdominal obesity (odds ratios 1.21, 1.16, 1.57; P = 0.002), obesity (odds ratios 1.25, 1.15, 1.49; P = 0.01), top quartile of c-reactive protein (odds ratios 1.11, 1.13, 1.32; P = 0.007), and MetS (adjusted for age and sex only) (odds ratios 1.53, 1.77, 1.86; P < 0.001). High copeptin levels were significantly associated with high fat intake, low physical activity, and borderline significantly associated with low socioeconomic status. The association between copeptin and components of the MetS was not affected after adjustment for these environmental factors. Our data suggest that increased activity of the AVP system is a unifying factor in the MetS and point to a new pharmacologically modifiable system of potential importance in the treatment of MetS and prevention of cardiovascular disease.

C-terminal provasopressin (copeptin) is a strong prognostic marker in patients with heart failure after an acute myocardial infarction: results from the OPTIMAAL study.

Stefan D. Anker,  Paul van Helden,  Hans Hillege … (2009)
The aim of the present study was to compare the prognostic value of a novel and promising marker, copeptin, with B-type natriuretic peptide (BNP), and N-terminal pro-BNP (NT-proBNP), on death or a composite cardiovascular endpoint in patients who developed heart failure after an acute myocardial infarction (AMI). From a subset of 224 patients of the OPTIMAAL study, blood samples were drawn at a mean of 3 days after AMI when all patients had signs and/or symptoms of heart failure or a left ventricular ejection fraction <0.35. Endpoints of interest were mortality (primary endpoint of OPTIMAAL) and a composite cardiovascular endpoint, including death, MI, stroke, and/or resuscitated cardiac arrest. Mean age was 67 +/- 10 years, and mean follow-up was 33 +/- 7 months. Using univariable Cox proportional hazards survival analysis, higher levels of copeptin, BNP, and NT-proBNP were all significantly related to both mortality and the composite cardiovascular endpoint (all P < 0.01). In a multivariable Cox proportional hazards model, including all three biomarkers and other relevant covariates, a doubling of copeptin was related to a 1.83 (1.26-2.64) times increased risk of mortality (P < 0.0001) and a 1.35 (1.05-1.72) times increased risk of the composite cardiovascular endpoint (P = 0.018). Receiver operating characteristic curves indicated that copeptin [area under curve (AUC) 0.81] was a stronger predictor of mortality compared with both BNP (AUC 0.66; P = 0.0063 vs. copeptin) and NT-proBNP (AUC 0.67; P = 0.0016 vs. copeptin). Finally, changes of copeptin levels after 1 month significantly added prognostic information to the baseline value. Copeptin is a strong and novel marker for mortality and morbidity in patients with heart failure after AMI. In this population, the predictive value of copeptin was even stronger than BNP and NT-proBNP.