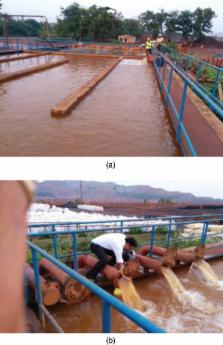 The wastewater at Sukinda chromite mines (SCM) area of Orissa (India) showed high levels of toxic hexavalent chromium (Cr VI). Wastewater from chromium-contaminated mines exhibit potential threats for biotic community in the vicinity. The aim of the present investigation is to develop a suitable phytoremediation technology for the effective removal of toxic hexavalent chromium from mines wastewater. A water hyacinth species Eichhornia crassipes was chosen to remediate the problem of Cr (VI) pollution from wastewater. It has been observed that this plant was able to remove 99.5% Cr (VI) of the processed water of SCM in 15 days. This aquatic plant not only removed hexavalent Cr, but is also capable of reducing total dissolved solids (TDS), biological oxygen demand (BOD), chemical oxygen demand (COD), and other elements of water also. Large-scale experiment was also performed using 100 L of water from SCM and the same removal efficiency was achieved.

Phytoextraction: the use of plants to remove heavy metals from soils.

The biochemistry of environmental heavy metal uptake by plants: implications for the food chain.

Jose R. Peralta-Videa,  Martha Laura López,  Mahesh Narayan … (2009)
Plants absorb a number of elements from soil, some of which have no known biological function and some are known to be toxic at low concentrations. As plants constitute the foundation of the food chain, some concerns have been raised about the possibility of toxic concentrations of certain elements being transported from plants to higher strata of the food chain. Special attention has been given to the uptake and biotransformation mechanisms occurring in plants and its role in bioaccumulation and impact on consumers, especially human beings. While this review draws particular attention to metal accumulation in edible plants, researched studies of certain wild plants and their consumers are included. Furthermore, this review focuses on plant uptake of the toxic elements arsenic, cadmium, chromium, mercury, and lead and their possible transfer to the food chain. These elements were selected because they are well-established as being toxic for living systems and their effects in humans have been widely documented. Arsenic is known to promote cancer of the bladder, lung, and skin and can be acquired, for example, through the consumption of As-contaminated rice. Cadmium can attack kidney, liver, bone, and it also affects the female reproduction system. Cadmium also can be found in rice. Chromium can produce cancer, and humans can be exposed through smoking and eating Cr-laden vegetables. Lead and mercury are well known neurotoxins that can be consumed via seafood, vegetables and rice.

A Hitmi,  Philippe Vernay,  Cécile Gauthier-Rouvière (2007)
Contamination by chromium (Cr) is widespread in agricultural soils and industrial sites. This heavy metal represents a risk to human health. In order to gain fundamental insights into the nature of the adaptation to Cr excess, the characterisation of physiological indices, including responses of photosynthetic gas exchange and chlorophyll a fluorescence along with changes in mineral nutrient contents and water status were studied in ray grass (Lolium perenne L.). Increased concentrations of Cr(VI) (0-500 microM Cr) in the Coïc and Lessaint nutrient solution were applied. The growth of Lolium perenne is decreased by chromium and the leaves have lost their pigments. Chromium accumulation was greater in roots than in leaves and reached 2450 and 210 microg g(-1) DW, respectively with 500 microM Cr(VI) in nutrient medium. The physiological parameters were severely reduced by this heavy metal. Cr induced toxicity arising from 100 microM Cr(VI) and resulted in a modification of mineral content in roots and leaves, especially for Ca, Mg and Fe. The chromium stress decreased CO2 assimilation rates mainly due to stomatal closure, which reduced water loss by transpiration without decreasing the cellular available CO2. The fluorescence parameters associated with photosystem II (PSII) activity and the photochemical activity are modified by chromium. Non-radiative energy dissipation mechanisms were triggered during stress since non-photochemical quenching was increased and efficiency of excitation capture by open centers was reduced.

Color versions of one or more of the figures in this article can be found online at www.tandfonline.com/bijp.

This is an Open Access article distributed under the terms of the Creative Commons Attribution License ( http://creativecommons.org/licenses/by/3.0), which permits unrestricted use, distribution, and reproduction in any medium, provided the original work is properly cited. The moral rights of the named author(s) have been asserted.