Ecology: A Prerequisite for Malaria Elimination and Eradication 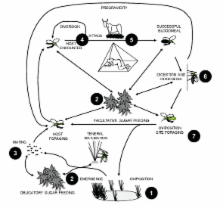 Gerry Killeen and colleagues argue that malaria eradication efforts will not be successful until a better understanding of the ecology and evolution of the mosquito vectors is gained.

Effect of a fall in malaria transmission on morbidity and mortality in Kilifi, Kenya

Wendy O’Meara,  Phillip Bejon,  Tabitha W Mwangi … (2008)
Summary Background As efforts to control malaria are expanded across the world, understanding the role of transmission intensity in determining the burden of clinical malaria is crucial to the prediction and measurement of the effectiveness of interventions to reduce transmission. Furthermore, studies comparing several endemic sites led to speculation that as transmission decreases morbidity and mortality caused by severe malaria might increase. We aimed to assess the epidemiological characteristics of malaria in Kilifi, Kenya, during a period of decreasing transmission intensity. Methods We analyse 18 years (1990–2007) of surveillance data from a paediatric ward in a malaria-endemic region of Kenya. The hospital has a catchment area of 250 000 people. Clinical data and blood-film results for more than 61 000 admissions are reported. Findings Hospital admissions for malaria decreased from 18·43 per 1000 children in 2003 to 3·42 in 2007. Over 18 years of surveillance, the incidence of cerebral malaria initially increased; however, malaria mortality decreased overall because of a decrease in incidence of severe malarial anaemia since 1997 (4·75 to 0·37 per 1000 children) and improved survival among children admitted with non-severe malaria. Parasite prevalence, the mean age of children admitted with malaria, and the proportion of children with cerebral malaria began to change 10 years before hospitalisation for malaria started to fall. Interpretation Sustained reduction in exposure to infection leads to changes in mean age and presentation of disease similar to those described in multisite studies. Changes in transmission might not lead to immediate reductions in incidence of clinical disease. However, longitudinal data do not indicate that reductions in transmission intensity lead to transient increases in morbidity and mortality. Funding Wellcome Trust, Kenya Medical Research Institute.

The Policy Forum allows health policy makers around the world to discuss challenges and opportunities for improving health care in their societies.

Publisher ID: 09-PLME-PF-3586R2
DOI: 10.1371/journal.pmed.1000303
PMC ID: 2914634
PubMed ID: 20689800
Copyright statement: This is an open-access article distributed under the terms of the Creative Commons Public Domain declaration which stipulates that, once placed in the public domain, this work may be freely reproduced, distributed, transmitted, modified, built upon, or otherwise used by anyone for any lawful purpose.