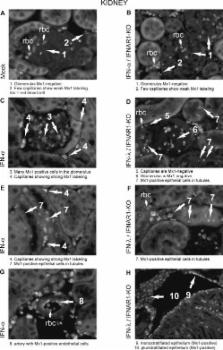 Interferons (IFN) exert antiviral, immunomodulatory and cytostatic activities. IFN-α/β (type I IFN) and IFN-λ (type III IFN) bind distinct receptors, but regulate similar sets of genes and exhibit strikingly similar biological activities. We analyzed to what extent the IFN-α/β and IFN-λ systems overlap in vivo in terms of expression and response. We observed a certain degree of tissue specificity in the production of IFN-λ. In the brain, IFN-α/β was readily produced after infection with various RNA viruses, whereas expression of IFN-λ was low in this organ. In the liver, virus infection induced the expression of both IFN-α/β and IFN-λ genes. Plasmid electrotransfer-mediated in vivo expression of individual IFN genes allowed the tissue and cell specificities of the responses to systemic IFN-α/β and IFN-λ to be compared. The response to IFN-λ correlated with expression of the α subunit of the IFN-λ receptor (IL-28Rα). The IFN-λ response was prominent in the stomach, intestine and lungs, but very low in the central nervous system and spleen. At the cellular level, the response to IFN-λ in kidney and brain was restricted to epithelial cells. In contrast, the response to IFN-α/β was observed in various cell types in these organs, and was most prominent in endothelial cells. Thus, the IFN-λ system probably evolved to specifically protect epithelia. IFN-λ might contribute to the prevention of viral invasion through skin and mucosal surfaces.

Virus-infected cells can secrete interferons (IFNs), cytokines that induce an infection-resistant state in neighboring cells. IFNs are critical to slow down early multiplication of pathogens in the body. Two IFN families exhibiting strikingly similar properties were described: type I IFNs (or IFN-α/β) and type III IFNs (or IFN-λ). Our work addressed the question of the redundancy of these two IFN systems in vivo. First, we found that the relative expression of IFN-λ over that of IFN-α/β exhibited some extent of tissue specificity and was low in the brain. Next, we used a strategy based on in vivo expression of cloned IFN genes to compare the responses of different tissues to IFN-α and IFN-λ. As was suggested by previous in vitro work, response to IFN-λ appeared to be restricted to epithelial cells, unlike response to IFN-α which occurred in most cell types. Tissues with a high epithelial content such as intestine, skin or lungs were the most responsive to IFN-λ and expressed the higher amounts of IFN-λ receptor. Our data suggest that the IFN-λ system evolved as a specific protection of epithelia and that it might contribute to prevent viral invasion through skin and mucosal surfaces.

K Shah,  Lisa G Gallagher,  Anastasia Kotenko … (2002)
We report here the identification of a ligand-receptor system that, upon engagement, leads to the establishment of an antiviral state. Three closely positioned genes on human chromosome 19 encode distinct but paralogous proteins, which we designate interferon-lambda1 (IFN-lambda1), IFN-lambda2 and IFN-lambda3 (tentatively designated as IL-29, IL-28A and IL-28B, respectively, by HUGO). The expression of IFN-lambda mRNAs was inducible by viral infection in several cell lines. We identified a distinct receptor complex that is utilized by all three IFN-lambda proteins for signaling and is composed of two subunits, a receptor designated CRF2-12 (also designated as IFN-lambdaR1) and a second subunit, CRF2-4 (also known as IL-10R2). Both receptor chains are constitutively expressed on a wide variety of human cell lines and tissues and signal through the Jak-STAT (Janus kinases-signal transducers and activators of transcription) pathway. This receptor-ligand system may contribute to antiviral or other defenses by a mechanism similar to, but independent of, type I IFNs.

Amy T Gilbert,  Wenfeng Xu,  J Shin … (2002)
Cytokines play a critical role in modulating the innate and adaptive immune systems. Here, we have identified from the human genomic sequence a family of three cytokines, designated interleukin 28A (IL-28A), IL-28B and IL-29, that are distantly related to type I interferons (IFNs) and the IL-10 family. We found that like type I IFNs, IL-28 and IL-29 were induced by viral infection and showed antiviral activity. However, IL-28 and IL-29 interacted with a heterodimeric class II cytokine receptor that consisted of IL-10 receptor beta (IL-10Rbeta) and an orphan class II receptor chain, designated IL-28Ralpha. This newly described cytokine family may serve as an alternative to type I IFNs in providing immunity to viral infection.