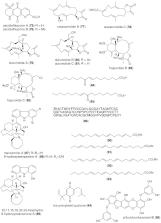 The peer-reviewed marine pharmacology literature in 2007–8 is covered in this review, which follows a similar format to the previous 1998–2006 reviews of this series. The preclinical pharmacology of structurally characterized marine compounds isolated from marine animals, algae, fungi and bacteria is discussed in a comprehensive manner. Antibacterial, anticoagulant, antifungal, antimalarial, antiprotozoal, antituberculosis and antiviral activities were reported for 74 marine natural products. Additionally, 59 marine compounds were reported to affect the cardiovascular, immune and nervous systems as well as to possess anti-inflammatory effects. Finally, 65 marine metabolites were shown to bind to a variety of receptors and miscellaneous molecular targets, and thus upon further completion of mechanism of action studies, will contribute to several pharmacological classes. Marine pharmacology research during 2007–8 remained a global enterprise, with researchers from 26 countries, and the United States, contributing to the preclinical pharmacology of 197 marine compounds which are part of the preclinical marine pharmaceuticals pipeline. Sustained preclinical research with marine natural products demonstrating novel pharmacological activities, will probably result in the expansion of the current marine pharmaceutical clinical pipeline, which currently consists of 13 marine natural products, analogs or derivatives targeting a limited number of disease categories.

Renaissance in antibacterial discovery from actinomycetes.

R Baltz (2008)
The soil actinomycetes have been important sources of antibiotics, but were nearly abandoned in recent years in favor of high-throughput target-based screening of chemical libraries. The latter approach has not been productive, so it is time to reinvigorate the discovery of new antibiotics from a proven source. Recent progress has been made on antibiotic discovery from actinomycetes by using high-throughput fermentation, isolation of marine actinomycetes, mining genomes for cryptic pathways, and combinatorial biosynthesis to generate new secondary metabolites related to existing pharmacophores.

Adriaan C I T L Tan (2007)
The prokaryotic marine cyanobacteria continue to be an important source of structurally bioactive secondary metabolites. A majority of these molecules are nitrogen-containing compounds biosynthesized by large multimodular nonribosomal polypeptide (NRP) or mixed polyketide-NRP enzymatic systems. A total of 128 marine cyanobacterial alkaloids, published in the literature between January 2001 and December 2006, are presented in this review with emphasis on their biosynthesis and biological activities. In addition, a number of highly cytotoxic compounds such as hectochlorin, lyngbyabellins, apratoxins, and aurilides have been identified as potential lead compounds for the development of anticancer agents. A brief coverage on the distribution of natural product biosynthetic genes as well as the mechanisms of tailoring enzymes involved in the biosynthesis of cyanobacterial compounds will also be given.