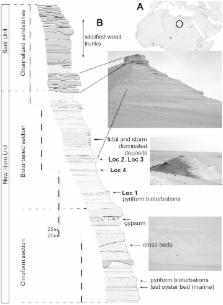 In the early nineteen sixties, Arambourg and Magnier found some freshwater fish (i.e., Polypterus sp., Siluriformes indet. and Lates sp.) mixed with marine members in an Eocene vertebrate assemblage at Gebel Coquin, in the southern Libyan Desert. This locality, aged ca 37–39Ma and now known under the name of Dur At-Talah, has been recently excavated. A new fish assemblage, mostly composed of teeth, was collected by the Mission Paléontologique Franco-Libyenne. In this paper, we describe freshwater fish members including a dipnoan ( Protopterus sp.), and several actinopterygians: bichir ( Polypterus sp.), aba fish ( Gymnarchus sp.), several catfishes ( Chrysichthys sp. and a mochokid indet.), several characiforms (including the tiger fish Hydrocynus sp., and one or two alestin-like fish), and perciforms (including the snake-head fish Parachanna sp. and at least one cichlid). Together with the fossiliferous outcrops at Birket Qarun in Egypt, the Libyan site at Dur At-Talah reduces a 10-Ma chronological gap in the fossil record of African freshwater fish. Their fish assemblages overlap in their composition and thus constitute a rather homogenous, original and significant amount of new elements regarding the Paleogene African ichthyofauna. This supports the establishment of the modern African freshwater fish fauna during this time period because these sites mostly contain the earliest members known in modern genera.

Xavier Valentin,  Laurent Marivaux,  Pauline Coster … (2010)
Reconstructing the early evolutionary history of anthropoid primates is hindered by a lack of consensus on both the timing and biogeography of anthropoid origins. Some prefer an ancient (Cretaceous) origin for anthropoids in Africa or some other Gondwanan landmass, whereas others advocate a more recent (early Cenozoic) origin for anthropoids in Asia, with subsequent dispersal of one or more early anthropoid taxa to Africa. The oldest undoubted African anthropoid primates described so far are three species of the parapithecid Biretia from the late middle Eocene Bir El Ater locality of Algeria and the late Eocene BQ-2 site in the Fayum region of northern Egypt. Here we report the discovery of the oldest known diverse assemblage of African anthropoids from the late middle Eocene Dur At-Talah escarpment in central Libya. The primate assemblage from Dur At-Talah includes diminutive species pertaining to three higher-level anthropoid clades (Afrotarsiidae, Parapithecidae and Oligopithecidae) as well as a small species of the early strepsirhine primate Karanisia. The high taxonomic diversity of anthropoids at Dur At-Talah indicates either a much longer interval of anthropoid evolution in Africa than is currently documented in the fossil record or the nearly synchronous colonization of Africa by multiple anthropoid clades at some time during the middle Eocene epoch.