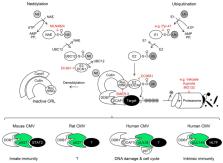 Human cytomegalovirus (HCMV) is a ubiquitous betaherpesvirus that frequently causes morbidity and mortality in individuals with insufficient immunity, such as transplant recipients, AIDS patients, and congenitally infected newborns. Several antiviral drugs are approved to treat HCMV infections. However, resistant HCMV mutants can arise in patients receiving long-term therapy. Additionally, side effects and the risk to cause birth defects limit the use of currently approved antivirals against HCMV. Therefore, the identification of new drug targets is of clinical relevance. Recent work identified DNA-damage binding protein 1 (DDB1) and the family of the cellular cullin (Cul) RING ubiquitin (Ub) ligases (CRLs) as host-derived factors that are relevant for the replication of human and mouse cytomegaloviruses. The first-in-class CRL inhibitory compound Pevonedistat (also called MLN4924) is currently under investigation as an anti-tumor drug in several clinical trials. Cytomegaloviruses exploit CRLs to regulate the abundance of viral proteins, and to induce the proteasomal degradation of host restriction factors involved in innate and intrinsic immunity. Accordingly, pharmacological blockade of CRL activity diminishes viral replication in cell culture. In this review, we summarize the current knowledge concerning the relevance of DDB1 and CRLs during cytomegalovirus replication and discuss chances and drawbacks of CRL inhibitory drugs as potential antiviral treatment against HCMV.

Systematic and quantitative assessment of the ubiquitin-modified proteome.

Woong Kim, Eric J. Bennett, Edward L. Huttlin … (2011)
Despite the diverse biological pathways known to be regulated by ubiquitylation, global identification of substrates that are targeted for ubiquitylation has remained a challenge. To globally characterize the human ubiquitin-modified proteome (ubiquitinome), we utilized a monoclonal antibody that recognizes diglycine (diGly)-containing isopeptides following trypsin digestion. We identify ~19,000 diGly-modified lysine residues within ~5000 proteins. Using quantitative proteomics we monitored temporal changes in diGly site abundance in response to both proteasomal and translational inhibition, indicating both a dependence on ongoing translation to observe alterations in site abundance and distinct dynamics of individual modified lysines in response to proteasome inhibition. Further, we demonstrate that quantitative diGly proteomics can be utilized to identify substrates for cullin-RING ubiquitin ligases. Interrogation of the ubiquitinome allows for not only a quantitative assessment of alterations in protein homeostasis fidelity, but also identification of substrates for individual ubiquitin pathway enzymes. Copyright © 2011 Elsevier Inc. All rights reserved.

Sergei V. Kotenko, Grant Gallagher, Vitaliy V Baurin … (2003)
We report here the identification of a ligand-receptor system that, upon engagement, leads to the establishment of an antiviral state. Three closely positioned genes on human chromosome 19 encode distinct but paralogous proteins, which we designate interferon-lambda1 (IFN-lambda1), IFN-lambda2 and IFN-lambda3 (tentatively designated as IL-29, IL-28A and IL-28B, respectively, by HUGO). The expression of IFN-lambda mRNAs was inducible by viral infection in several cell lines. We identified a distinct receptor complex that is utilized by all three IFN-lambda proteins for signaling and is composed of two subunits, a receptor designated CRF2-12 (also designated as IFN-lambdaR1) and a second subunit, CRF2-4 (also known as IL-10R2). Both receptor chains are constitutively expressed on a wide variety of human cell lines and tissues and signal through the Jak-STAT (Janus kinases-signal transducers and activators of transcription) pathway. This receptor-ligand system may contribute to antiviral or other defenses by a mechanism similar to, but independent of, type I IFNs.

Virus interference. I. The interferon.