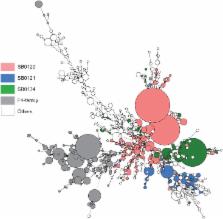 To study the dynamics of bovine tuberculosis (bTB) in France, 4,654 M. bovis strains isolated mainly from livestock and wildlife since 1978 were characterized by spoligotyping and MLVA based on MIRU-VNTR. In our study spoligotyping allowed the discrimination of 176 types although 3 spoligotypes are predominant and account for more than half of the total strain population: SB0120 (26%), SB0134 (11%) and SB0121 (6%). In addition, 11% of the isolates, principally from Southern France, showing close spoligotypes and MIRU-VNTR types have been gathered in a family designated as the “F4-family”. MLVA typing allowed extensive discrimination, particularly for strains with predominant spoligotypes, with a total of 498 genotypes, several of which were highly regionalized. The similarity of the strains’ genetic relationships based on spoligotyping and MIRU-VNTR markers supports the co-existence of different clonal populations within the French M. bovis population. A genetic evolution of the strains was observed both geographically and in time. Indeed, as a result of the reduction of bTB due to the national control campaigns, a large reduction of the strains’ genetic variability took place in the last ten years. However, in the regions were bTB is highly prevalent at present, cases in both livestock and in wildlife are due to the spread of unique local genotype profiles. Our results show that the highly discriminating genotyping tools used in this study for molecular studies of bTB are useful for addressing pending questions, which would lead to a better insight into the epidemiology of the disease, and for finding proper solutions for its sustainable control in France.

Simultaneous detection and strain differentiation of Mycobacterium tuberculosis for diagnosis and epidemiology.

H Molhuizen,  A Kolk,  J Kamerbeek … (1997)
Widespread use of DNA restriction fragment length polymorphism (RFLP) to differentiate strains of Mycobacterium tuberculosis to monitor the transmission of tuberculosis has been hampered by the need to culture this slow-growing organism and by the level of technical sophistication needed for RFLP typing. We have developed a simple method which allows simultaneous detection and typing of M. tuberculosis in clinical specimens and reduces the time between suspicion of the disease and typing from 1 or several months to 1 or 3 days. The method is based on polymorphism of the chromosomal DR locus, which contains a variable number of short direct repeats interspersed with nonrepetitive spacers. The method is referred to as spacer oligotyping or "spoligotyping" because it is based on strain-dependent hybridization patterns of in vitro-amplified DNA with multiple spacer oligonucleotides. Most of the clinical isolates tested showed unique hybridization patterns, whereas outbreak strains shared the same spoligotype. The types obtained from direct examination of clinical samples were identical to those obtained by using DNA from cultured M. tuberculosis. This novel preliminary study shows that the novel method may be a useful tool for rapid disclosure of linked outbreak cases in a community, in hospitals, or in other institutions and for monitoring of transmission of multidrug-resistant M. tuberculosis. Unexpectedly, spoligotyping was found to differentiate M. bovis from M. tuberculosis, a distinction which is often difficult to make by traditional methods.

Numerical index of the discriminatory ability of typing systems: an application of Simpson's index of diversity.

Benjamin Gaston,  Craig P. Hunter (1988)
An index of discrimination for typing methods is described, based on the probability of two unrelated strains being characterized as the same type. This index may be used to compare typing methods and select the most discriminatory system.

Maryse Fauville-Dufaux,  Dick van Soolingen,  Nalin Rastogi … (2006)
Molecular typing based on 12 loci containing variable numbers of tandem repeats of mycobacterial interspersed repetitive units (MIRU-VNTRs) has been adopted in combination with spoligotyping as the basis for large-scale, high-throughput genotyping of Mycobacterium tuberculosis. However, even the combination of these two methods is still less discriminatory than IS6110 fingerprinting. Here, we define an optimized set of MIRU-VNTR loci with a significantly higher discriminatory power. The resolution and the stability/robustness of 29 loci were analyzed, using a total of 824 tubercle bacillus isolates, including representatives of the main lineages identified worldwide so far. Five loci were excluded for lack of robustness and/or stability in serial isolates or isolates from epidemiologically linked patients. The use of the 24 remaining loci increased the number of types by 40%--and by 23% in combination with spoligotyping--among isolates from cosmopolitan origins, compared to those obtained with the original set of 12 loci. Consequently, the clustering rate was decreased by fourfold--by threefold in combination with spoligotyping--under the same conditions. A discriminatory subset of 15 loci with the highest evolutionary rates was then defined that concentrated 96% of the total resolution obtained with the full 24-locus set. Its predictive value for evaluating M. tuberculosis transmission was found to be equal to that of IS6110 restriction fragment length polymorphism typing, as shown in a companion population-based study. This 15-locus system is therefore proposed as the new standard for routine epidemiological discrimination of M. tuberculosis isolates and the 24-locus system as a high-resolution tool for phylogenetic studies.

‡ These authors contributed equally to this work.

This work was partly funded by a CNRS-MIE project (MLB, ALB and SG). The funders had no role in study design, data collection and analysis, decision to publish, or preparation of the manuscript. The rest of the funding was internal to the authors’ organization.