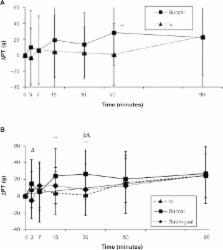 Acetaminophen (APAP) by oral or intravenous (iv) routes is used for mild to moderate pain but may take time to be effective. When fast relief is required and/or oral or iv routes are not available because of the patient’s condition, the transmucosal route may be an alternative.

A new transmucosal/buccal (b) pharmaceutical form of APAP dissolved in 50% wt alcohol is compared with other routes of administration. Two consecutive randomized, crossover, double-blind clinical trials (CT1: NCT00982215 and CT2: NCT01206985) included 16 healthy volunteers. CT1 compared the pharmacology of 250 mg bAPAP with 1 g iv APAP. CT2 compared the pharmacodynamics of 125 mg bAPAP with 1 g iv and 125 mg sublingual (s) APAP. Mechanical pain thresholds are recorded in response to mechanical stimuli applied on the forearm several times during 120 minutes. The objective is to compare the time of onset of antinociception and the antinociception (area under the curve) between the routes of administration with analysis of variance (significance P<0.05).

bAPAP has a faster antinociceptive action in healthy volunteers. This attractive alternative to other routes would be useful in situations where oral or iv routes are not available. This finding must now be confirmed in patients suffering from acute pain of mild and moderate intensity.

A validation study of the WHO method for cancer pain relief.

F Naldi,  M Tamburini,  V Ventafridda … (1987)
The method for cancer pain relief proposed by the World Health Organization (WHO) consists of guidelines for a three-step treatment, from non-opioids to weak and then strong opioids, according to need. Adjuvant drugs can be added to each step. This report presents the 2-year experience of the WHO Collaborating Centre at the National Cancer Institute of Milan in the use of this method. This retrospective study shows that a correct use of the analgesic ladder can reduce pain to a third of its initial intensity. The use of non-opioids had an average duration of 19.2 days; in 52% of the cases treatment was discontinued due to inefficacy and in 42%, to side effects. Weak opioids were administered on an average for 28.0 days. A shift to Strong opioids was made in 92% of the cases due to inefficacy and in 8% because of side effects. Treatment with strong opioids lasted for an average of 46.6 days and can be considered the mainstay of cancer pain therapy. Performance status was not altered considerably during the study and hours of sleep were doubled. The analgesic ladder proved efficacious in 71% of the cases. Neurolytic procedures had to be used in 29%. The authors conclude that analgesics, as proposed by WHO, are the most suitable treatment arm in controlling pain in palliative treatment for advanced cancer patients. Lack of availability or underuse of opioids constitute the real obstacle to the application of this method.

Conversion of acetaminophen to the bioactive N-acylphenolamine AM404 via fatty acid amide hydrolase-dependent arachidonic acid conjugation in the nervous system.

Peter M. Zygmunt,  Anna Ermund,  Benjamin Cravatt … (2005)
Acetaminophen (paracetamol) is a popular domestic analgesic and antipyretic agent with a weak anti-inflammatory action and a low incidence of adverse effects as compared with aspirin and other non-steroidal anti-inflammatory drugs. Here we show that acetaminophen, following deacetylation to its primary amine, is conjugated with arachidonic acid in the brain and the spinal cord to form the potent TRPV1 agonist N-arachidonoylphenolamine (AM404). This conjugation is absent in mice lacking the enzyme fatty acid amide hydrolase. AM404 also inhibits purified cyclooxygenase (COX)-1 and COX-2 and prostaglandin synthesis in lipopolysaccharide-stimulated RAW264.7 macrophages. This novel metabolite of acetaminophen also acts on the endogenous cannabinoid system, which, together with TRPV1 and COX, is present in the pain and thermoregulatory pathways. These findings identify fatty acid conjugation as a novel pathway for drug metabolism and provide a molecular mechanism for the occurrence of the analgesic N-acylphenolamine AM404 in the nervous system following treatment with acetaminophen.

Arno N Vermeulen,  Gert Bessems (2000)
An overview is presented on the molecular aspects of toxicity due to paracetamol (acetaminophen) and structural analogues. The emphasis is on four main topics, that is, bioactivation, detoxication, chemoprevention, and chemoprotection. In addition, some pharmacological and clinical aspects are discussed briefly. A general introduction is presented on the biokinetics, biotransformation, and structural modification of paracetamol. Phase II biotransformation in relation to marked species differences and interorgan transport of metabolites are described in detail, as are bioactivation by cytochrome P450 and peroxidases, two important phase I enzyme families. Hepatotoxicity is described in depth, as it is the most frequent clinical observation after paracetamol-intoxication. In this context, covalent protein binding and oxidative stress are two important initial (Stage I) events highlighted. In addition, the more recently reported nuclear effects are discussed as well as secondary events (Stage II) that spread over the whole liver and may be relevant targets for clinical treatment. The second most frequent clinical observation, renal toxicity, is described with respect to the involvement of prostaglandin synthase, N-deacetylase, cytochrome P450 and glutathione S-transferase. Lastly, mechanism-based developments of chemoprotective agents and progress in the development of structural analogues with an improved therapeutic index are outlined.