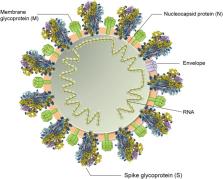 SARS-CoV-2 is a single-stranded RNA virus of ~30 kb genome size which belongs to genus Coronavirus and family Coronaviridae. SARS-CoV-2 has recently emerged and has been declared as a pandemic by the World Health Organization. Genomic characterization of SARS-CoV-2 has shown that it is of zoonotic origin. The structure of SARS-CoV-2 is found to be similar to SARS-CoV with virion size ranging from 70 to 90 nm. Spike, membrane, and envelope surface viral proteins of coronavirus are embedded in host membrane-derived lipid bilayer encapsulating the helical nucleocapsid comprising viral RNA. The genome comprises of 6–11 open reading frames (ORFs) with 5′ and 3′ flanking untranslated regions (UTRs). Sequence variation among SARS-CoV-2 and SARS-CoV revealed no significant difference in ORFs and nsps. The nsps includes two viral cysteine proteases including papain-like protease (nsp3), chymotrypsin-like, 3C-like, or main protease (nsp5), RNA-dependent RNA polymerase (nsp12), helicase (nsp13), and others likely to be involved in the transcription and replication of SARS-CoV-2. The structure of spike glycoprotein structure of SARS-CoV-2 resembles that of the spike protein of SARS-CoV with an root-mean-square deviation (RMSD) of 3.8 Å. Like SARS-CoV, SARS-CoV-2 uses the ACE2 receptor for internalization and TMPRSS2 serine proteases for S protein priming. Histopathological investigation of tissues from SARS-CoV-2 infected patients showed virus-induced cytopathic effect with signs of acute respiratory distress syndrome in lung cells. This chapter discusses about the morphology, genome organization, replication, and pathogenesis of SARS-CoV-2 that may help us understand the disease that may leads to identification of effective antiviral drugs and vaccines.

Swatantra Kumar,  Vimal K. Maurya,  Anil Prasad … (2020)
The emergence of 2019 novel coronavirus (2019-nCoV) is of global concern and might have emerged from RNA recombination among existing coronaviruses. CoV spike (S) protein which is crucial for receptor binding, membrane fusion via conformational changes, internalization of the virus, host tissue tropism and comprises crucial targets for vaccine development, remain largely uncharacterized. Therefore, the present study has been planned to determine the sequence variation, structural and antigenic divergence of S glycoprotein which may be helpful for the management of 2019-nCoV infection. The sequences of spike glycoprotein of 2019-nCoV and SARS coronavirus (SARS-CoV) were used for the comparison. The sequence variations were determined using EMBOSS Needle pairwise sequence alignment tools. The variation in glycosylation sites was predicted by NetNGlyc 1.0 and validated by N-GlyDE server. Antigenicity was predicted by NetCTL 1.2 and validated by IEDB Analysis Resource server. The structural divergence was determined by using SuperPose Version 1.0 based on cryo-EM structure of the SARS coronavirus spike glycoprotein. Our data suggests that 2019-nCoV is newly spilled coronavirus into humans in China is closely related to SARS-CoV, which has only 12.8% of difference with SARS-CoV in S protein and has 83.9% similarity in minimal receptor-binding domain with SARS-CoV. Addition of a novel glycosylation sites were observed in 2019-nCoV. In addition, antigenic analysis proposes that great antigenic differences exist between both the viral strains, but some of the epitopes were found to be similar between both the S proteins. In spite of the variation in S protein amino acid composition, we found no significant difference in their structures. Collectively, for the first time our results exhibit the emergence of human 2019-nCoV is closely related to predecessor SARS-CoV and provide the evidence that 2019-nCoV uses various novel glycosylation sites as SARS-CoV and may have a potential to become pandemic owing its antigenic discrepancy. Further, demonstration of novel Cytotoxic T lymphocyte epitopes may impart opportunities for the development of peptide based vaccine for the prevention of 2019-nCoV.

Detection of alpha- and betacoronaviruses in rodents from Yunnan, China

Xing-Yi Ge,  Wei-Hong Yang,  Ji-Hua Zhou … (2017)
Background Rodents represent the most diverse mammals on the planet and are important reservoirs of human pathogens. Coronaviruses infect various animals, but to date, relatively few coronaviruses have been identified in rodents worldwide. The evolution and ecology of coronaviruses in rodent have not been fully investigated. Results In this study, we collected 177 intestinal samples from thress species of rodents in Jianchuan County, Yunnan Province, China. Alphacoronavirus and betacoronavirus were detected in 23 rodent samples from three species, namely Apodemus chevrieri (21/98), Eothenomys fidelis (1/62), and Apodemus ilex (1/17). We further characterized the full-length genome of an alphacoronavirus from the A. chevrieri rat and named it as AcCoV-JC34. The AcCoV-JC34 genome was 27,649 nucleotides long and showed a structure similar to the HKU2 bat coronavirus. Comparing the normal transcription regulatory sequence (TRS), 3 variant TRS sequences upstream the spike (S), ORF3, and ORF8 genes were found in the genome of AcCoV-JC34. In the conserved replicase domains, AcCoV-JC34 was most closely related to Rattus norvegicus coronavirus LNRV but diverged from other alphacoronaviruses, indicating that AcCoV-JC34 and LNRV may represent a novel alphacoronavirus species. However, the S and nucleocapsid proteins showed low similarity to those of LRNV, with 66.5 and 77.4% identities, respectively. Phylogenetic analysis revealed that the S genes of AcCoV-JC34, LRNV, and HKU2 formed a distinct lineage with all known coronaviruses. Conclusions Both alphacoronaviruses and betacoronaviruses were detected in Apodemus chevrieri in the Yunnan Province of China, indicating that Apodemus chevrieri is an important host for coronavirus. Several new features were identified in the genome of an Apodemus chevrieri coronavirus. The phylogenetic distance to other coronaviruses suggests a variable origin and evolutionary route of the S genes of AcCoV-JC34, LRNV, and HKU2. These results indicate that the diversity of rodent coronaviruses is much higher than previously expected. Further surveillance and functional studies of these coronaviruses will help to better understand the importance of rodent as host for coronaviruses. Electronic supplementary material The online version of this article (doi:10.1186/s12985-017-0766-9) contains supplementary material, which is available to authorized users.

B. Brett Finlay,  Raymond See,  Robert Brunham (2004)
New and emerging infectious diseases continue to plague the world, and there is significant concern that recombinant infectious agents can be used as bioterrorism threats. Microbiologists are increasingly being asked to apply their scientific knowledge to respond to these threats. The recent pandemic caused by the severe acute respiratory syndrome (SARS) coronavirus illustrated not only how a newly evolved pathogen can rapidly spread throughout the world but also how the global community can unite to identify the causative agent and control its spread. Rapid response research mechanisms, such as those used by the SARS Accelerated Vaccine Initiative (SAVI), have shown that the application of emergency management techniques, together with rapid response research, can be highly effective when applied appropriately to new infectious diseases.