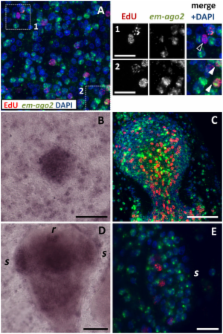 It is believed that in tapeworms a separate population of undifferentiated cells, the germinative cells, is the only source of cell proliferation throughout the life cycle (similar to the neoblasts of free living flatworms). In Echinococcus multilocularis, the metacestode larval stage has a unique development, growing continuously like a mass of vesicles that infiltrate the tissues of the intermediate host, generating multiple protoscoleces by asexual budding. This unique proliferation potential indicates the existence of stem cells that are totipotent and have the ability for extensive self-renewal.

We show that only the germinative cells proliferate in the larval vesicles and in primary cell cultures that undergo complete vesicle regeneration, by using a combination of morphological criteria and by developing molecular markers of differentiated cell types. The germinative cells are homogeneous in morphology but heterogeneous at the molecular level, since only sub-populations express homologs of the post-transcriptional regulators nanos and argonaute. Important differences are observed between the expression patterns of selected neoblast marker genes of other flatworms and the E. multilocularis germinative cells, including widespread expression in E. multilocularis of some genes that are neoblast-specific in planarians. Hydroxyurea treatment results in the depletion of germinative cells in larval vesicles, and after recovery following hydroxyurea treatment, surviving proliferating cells grow as patches that suggest extensive self-renewal potential for individual germinative cells.

In E. multilocularis metacestodes, the germinative cells are the only proliferating cells, presumably driving the continuous growth of the larval vesicles. However, the existence of sub-populations of the germinative cells is strongly supported by our data. Although the germinative cells are very similar to the neoblasts of other flatworms in function and in undifferentiated morphology, their unique gene expression pattern and the evolutionary loss of conserved stem cells regulators suggest that important differences in their physiology exist, which could be related to the unique biology of E. multilocularis larvae.

A chemical method for fast and sensitive detection of DNA synthesis in vivo.

Adrian Salic,  Timothy J. Mitchison (2008)
We have developed a method to detect DNA synthesis in proliferating cells, based on the incorporation of 5-ethynyl-2'-deoxyuridine (EdU) and its subsequent detection by a fluorescent azide through a Cu(I)-catalyzed [3 + 2] cycloaddition reaction ("click" chemistry). Detection of the EdU label is highly sensitive and can be accomplished in minutes. The small size of the fluorescent azides used for detection results in a high degree of specimen penetration, allowing the staining of whole-mount preparations of large tissue and organ explants. In contrast to BrdU, the method does not require sample fixation or DNA denaturation and permits good structural preservation. We demonstrate the use of the method in cultured cells and in the intestine and brain of whole animals.

Biological, epidemiological, and clinical aspects of echinococcosis, a zoonosis of increasing concern.

Johannes Eckert,  Peter Deplazes (2003)
Echinococcosis in humans is a zoonotic infection caused by larval stages (metacestodes) of cestode species of the genus Echinococcus. Cystic echinococcosis (CE) is caused by Echinococcus granulosus, alveolar echinococcosis (AE) is caused by E. multilocularis, and polycystic forms are caused by either E. vogeli or E. oligarthrus. In untreated cases, AE has a high mortality rate. Although control is essentially feasible, CE remains a considerable health problem in many regions of the northern and southern hemispheres. AE is restricted to the northern hemisphere regions of North America and Eurasia. Recent studies have shown that E. multilocularis, the causative agent of AE, is more widely distributed than previously thought. There are also some hints of an increasing significance of polycystic forms of the disease, which are restricted to Central and South America. Various aspects of human echinococcosis are discussed in this review, including data on the infectivity of genetic variants of E. granulosus to humans, the increasing invasion of cities in Europe and Japan by red foxes, the main definitive hosts of E. multilocularis, and the first demonstration of urban cycles of the parasite. Examples of emergence or reemergence of CE are presented, and the question of potential spreading of E. multilocularis is critically assessed. Furthermore, information is presented on new and improved tools for diagnosing the infection in final hosts (dogs, foxes, and cats) by coproantigen or DNA detection and the application of molecular techniques to epidemiological studies. In the clinical field, the available methods for diagnosing human CE and AE are described and the treatment options are summarized. The development of new chemotherapeutic options for all forms of human echinococcosis remains an urgent requirement. A new option for the control of E. granulosus in the intermediate host population (mainly sheep and cattle) is vaccination. Attempts are made to reduce the prevalence of E. multilocualaris in fox populations by regular baiting with an anthelmintic (praziquantel). Recent data have shown that this control option may be used in restricted areas, for example in cities, with the aim of reducing the infection risk for humans.