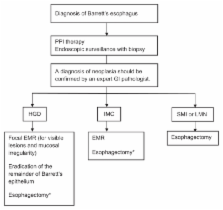 Esophageal adenocarcinoma and its precursor, Barrett’s esophagus, are rapidly rising in incidence. This review serves to highlight the role of pharmacologic, endoscopic, and surgical intervention in the management of Barrett’s esophagus, which requires acid suppression and endoscopic assessment. Treatment with a proton pump inhibitor may decrease acid exposure and delay the progression to dysplasia. Patients who require aspirin for cardioprotection or other indications may also benefit in terms of a protective effect against the development of esophageal cancer. However, without other indications, aspirin is not indicated solely to prevent cancer. A careful endoscopic examination should include assessment of any visible lesions in a Barrett’s segment. An expert gastrointestinal pathologist should confirm neoplasia in the setting of Barrett’s esophagus. For those patients with high-grade dysplasia or intramucosal carcinoma, careful consideration of endoscopic therapy or surgical therapy must be given. All visible lesions in the setting of dysplasia should be targeted with focal endoscopic mucosal resection for both accurate histopathologic diagnosis and treatment. The remainder of the Barrett’s epithelium should be eradicated to address all synchronous and metachronous lesions. This may be done by tissue acquiring or nontissue acquiring means. Radiofrequency ablation has a positive benefit-risk profile for flat Barrett’s esophagus. At this time, endoscopic therapy is not indicated for nondysplastic Barrett’s esophagus. Esophagectomy is still reserved for selected cases with evidence of lymph node metastasis, unsuccessful endoscopic therapy, or with high-risk features of high-grade dysplasia or intramucosal carcinoma.

Extended transthoracic resection compared with limited transhiatal resection for adenocarcinoma of the esophagus.

H Dekken,  Helga E. de Vries,  J. de Visscher … (2002)
Controversy exists about the best surgical treatment for esophageal carcinoma. We randomly assigned 220 patients with adenocarcinoma of the mid-to-distal esophagus or adenocarcinoma of the gastric cardia involving the distal esophagus either to transhiatal esophagectomy or to transthoracic esophagectomy with extended en bloc lymphadenectomy. Principal end points were overall survival and disease-free survival. Early morbidity and mortality, the number of quality-adjusted life-years gained, and cost effectiveness were also determined. A total of 106 patients were assigned to undergo transhiatal esophagectomy, and 114 to undergo transthoracic esophagectomy. Demographic characteristics and characteristics of the tumor were similar in the two groups. Perioperative morbidity was higher after transthoracic esophagectomy, but there was no significant difference in in-hospital mortality (P=0.45). After a median follow-up of 4.7 years, 142 patients had died--74 (70 percent) after transhiatal resection and 68 (60 percent) after transthoracic resection (P=0.12). Although the difference in survival was not statistically significant, there was a trend toward a survival benefit with the extended approach at five years: disease-free survival was 27 percent in the transhiatal-esophagectomy group, as compared with 39 percent in the transthoracic-esophagectomy group (95 percent confidence interval for the difference, -1 to 24 percent [the negative value indicates better survival with transhiatal resection]), whereas overall survival was 29 percent as compared with 39 percent (95 percent confidence interval for the difference, -3 to 23 percent). Transhiatal esophagectomy was associated with lower morbidity than transthoracic esophagectomy with extended en bloc lymphadenectomy. Although median overall, disease-free, and quality-adjusted survival did not differ statistically between the groups, there was a trend toward improved long-term survival at five years with the extended transthoracic approach. Copyright 2002 Massachusetts Medical Society

Daniel May-Arrioja,  L. Gossner,  E Guenter … (2008)
Endoscopic therapy is increasingly being used in the treatment of high-grade intraepithelial neoplasia (HGIN) and mucosal adenocarcinoma (BC) in patients with Barrett's oesophagus. This report provides 5 year follow-up data from a large prospective study investigating the efficacy and safety of endoscopic treatment in these patients and analysing risk factors for recurrence. Prospective case series. Academic tertiary care centre. Between October 1996 and September 2002, 61 patients with HGIN and 288 with BC were included (173 with short-segment and 176 with long-segment Barrett's oesophagus) from a total of 486 patients presenting with Barrett's neoplasia. Patients with submucosal or more advanced cancer were excluded. Endoscopic therapy. Rate of complete remission and recurrence rate, tumour-associated death. Endoscopic resection was performed in 279 patients, photodynamic therapy in 55, and both procedures in 13; two patients received argon plasma coagulation. The mean follow-up period was 63.6 (SD 23.1) months. Complete response (CR) was achieved in 337 patients (96.6%); surgery was necessary in 13 (3.7%) after endoscopic therapy failed. Metachronous lesions developed during the follow-up in 74 patients (21.5%); 56 died of concomitant disease, but none died of BC. The calculated 5 year survival rate was 84%. The risk factors most frequently associated with recurrence were piecemeal resection, long-segment Barrett's oesophagus, no ablative therapy of Barrett's oesophagus after CR, time until CR achieved >10 months and multifocal neoplasia. This study showed that endoscopic therapy was highly effective and safe, with an excellent long-term survival rate. The risk factors identified may help stratify patients who are at risk for recurrence and those requiring more intensified follow-up.

Christian Ell,  Andrea May,  Liebwin Gossner … (2000)
In view of the mortality and morbidity rates of esophagectomy and the relatively large group of inoperable patients, local therapeutic techniques are required for high-grade dysplasia and early Barrett's cancer. A prospective investigation of endoscopic mucosal resection was conducted in 64 patients (mean age, 65 +/- 10 years) who had early carcinoma (61 patients) or high-grade dysplasia (3 patients) in Barrett's esophagus. Thirty-five patients met the criteria for low risk: macroscopic types I, IIa, IIb, and IIc; lesion diameter up to 20 mm; mucosal lesion; and histological grades G1 and G2 and/or high-grade dysplasia (group A). The remaining 29 patients were included in group B (high risk). A total of 120 resections were performed, with no technical problems encountered. The mean number of treatment sessions per patient was 1. 3 +/- 0.6 in group A and 2.8 +/- 2.0 in group B (P < 0.0005). Only one major complication occurred, a case of spurting bleeding, which was managed endoscopically. Complete local remission was achieved significantly earlier (P = 0.008) in group A than in group B. In May 1999, complete remission had been achieved in 97% of the patients in group A and in 59% of those in group B; however, 1 patient in group A and 9 in group B are still undergoing treatment or awaiting the first check-up. During a mean follow-up of 12 +/- 8 months, recurrent or metachronous carcinomas were found in 14%. Endoscopic mucosal resection of early carcinoma in Barrett's esophagus is associated with promisingly low morbidity and mortality rates. The procedure may offer a new minimally invasive therapeutic alternative to esophagectomy, especially in low-risk situations. Comparisons with surgical results will need to be done when the long-term results of this procedure become available.