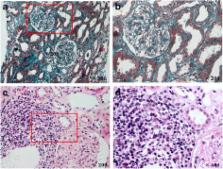 This study reports the clinical and pathological features of 12 cases of primary Sjogren syndrome (pSS) with renal involvement presenting with proximal tubular dysfunction in a single center, and investigates the possible correlation of ectopic germinal center formation and megalin/cubilin down-expression.

Clinical and pathological records were reviewed. Immunohistochemistry was carried out to detect megalin, cubilin, CD21 and IL-17 expression.

We report 12 cases of pSS characterized by Fanconi syndrome. The decreased megalin and cubilin expression may contribute to the proximal tubular reabsorption defect, possibly secondary to Th17 infiltration and formation of ectopic germinal centers.

,  Xavier Mariette,  Philippe Ravaud … (2010)
To develop a disease activity index for patients with primary Sjögren's syndrome (SS): the European League Against Rheumatism (EULAR) Sjögren's syndrome disease activity index (ESSDAI). Thirty-nine SS experts participated in an international collaboration, promoted by EULAR, to develop the ESSDAI. Experts identified 12 organ-specific 'domains' contributing to disease activity. For each domain, features of disease activity were classified in three or four levels according to their severity. Data abstracted from 96 patients with systemic complications of primary SS were used to generate 702 realistic vignettes for which all possible systemic complications were represented. Using the 0-10 physician global assessment (PhGA) scale, each expert scored the disease activity of five patient profiles and 20 realistic vignettes. Multiple regression modelling, with PhGA used as the dependent variable, was used to estimate the weight of each domain. All 12 domains were significantly associated with disease activity in the multivariate model, domain weights ranged from 1 to 6. The ESSDAI scores varied from 2 to 47 and were significantly correlated with PhGA for both real patient profiles and realistic vignettes (r=0.61 and r=0.58, respectively, p<0.001). Compared with 57 (59.4%) of the real patient profiles, 468 (66.7%) of the realistic vignettes were considered likely or very likely to be true. The ESSDAI is a clinical index designed to measure disease activity in patients with primary SS. Once validated, such a standardised evaluation of primary SS should facilitate clinical research and be helpful as an outcome measure in clinical trials.

Ling Wu,  Xiaoxia Li,  Chi C. Gu (2013)
The interleukin 17 (IL-17) family, a subset of cytokines consisting of IL-17A-F, plays crucial roles in host defense against microbial organisms and in the development of inflammatory diseases. Although IL-17A is the signature cytokine produced by T helper 17 (Th17) cells, IL-17A and other IL-17 family cytokines have multiple sources ranging from immune cells to non-immune cells. The IL-17 family signals via their correspondent receptors and activates downstream pathways that include NFκB, MAPKs and C/EBPs to induce the expression of anti-microbial peptides, cytokines and chemokines. The proximal adaptor Act1 is a common mediator during the signaling of all IL-17 cytokines so far and is thus involved in IL-17 mediated host defense and IL-17-driven autoimmune conditions. This review will give an overview and recent updates on the IL-17 family, the activation and regulation of IL-17 signaling as well as diseases associated with this cytokine family. Copyright © 2013 Elsevier Ltd. All rights reserved.

Corine H. GeurtsvanKessel,  Monique A.M. Willart,  Ingrid M. Bergen … (2009)
Tertiary lymphoid organs (TLOs) are organized aggregates of B and T cells formed in postembryonic life in response to chronic immune responses to infectious agents or self-antigens. Although CD11c+ dendritic cells (DCs) are consistently found in regions of TLO, their contribution to TLO organization has not been studied in detail. We found that CD11chi DCs are essential for the maintenance of inducible bronchus-associated lymphoid tissue (iBALT), a form of TLO induced in the lungs after influenza virus infection. Elimination of DCs after the virus had been cleared from the lung resulted in iBALT disintegration and reduction in germinal center (GC) reactions, which led to significantly reduced numbers of class-switched plasma cells in the lung and bone marrow and reduction in protective antiviral serum immunoglobulins. Mechanistically, DCs isolated from the lungs of mice with iBALT no longer presented viral antigens to T cells but were a source of lymphotoxin (LT) β and homeostatic chemokines (CXCL-12 and -13 and CCL-19 and -21) known to contribute to TLO organization. Like depletion of DCs, blockade of LTβ receptor signaling after virus clearance led to disintegration of iBALT and GC reactions. Together, our data reveal a previously unappreciated function of lung DCs in iBALT homeostasis and humoral immunity to influenza virus.