BioLQM: A Java Toolkit for the Manipulation and Conversion of Logical Qualitative Models of Biological Networks 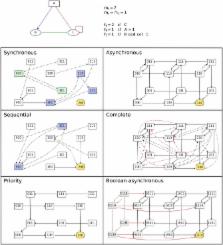 Here we introduce bioLQM, a new Java software toolkit for the conversion, modification, and analysis of Logical Qualitative Models of biological regulatory networks. BioLQM provides core modeling operations as building blocks for the development of integrated modeling software, or for the assembly of heterogeneous analysis workflows involving several complementary tools. Based on the definition of multi-valued logical models, bioLQM implements import and export facilities, notably for the recent SBML qual exchange format, as well as for formats used by several popular tools, facilitating the design of workflows combining these tools. Model modifications enable the definition of various perturbations, as well as model reduction, easing the analysis of large models. Another modification enables the study of multi-valued models with tools limited to the Boolean case. Finally, bioLQM provides a framework for the development of novel analysis tools. The current version implements various updating modes for model simulation (notably synchronous, asynchronous, and random asynchronous), as well as some static analysis features for the identification of attractors. The bioLQM software can be integrated into analysis workflows through command line and scripting interfaces. As a Java library, it further provides core data structures to the GINsim and EpiLog interactive tools, which supply graphical interfaces and additional analysis methods for cellular and multi-cellular qualitative models.

Dynamical analysis of a generic Boolean model for the control of the mammalian cell cycle.

A. Faure,  A Naldi,  C Chaouiya … (2006)
To understand the behaviour of complex biological regulatory networks, a proper integration of molecular data into a full-fledge formal dynamical model is ultimately required. As most available data on regulatory interactions are qualitative, logical modelling offers an interesting framework to delineate the main dynamical properties of the underlying networks. Transposing a generic model of the core network controlling the mammalian cell cycle into the logical framework, we compare different strategies to explore its dynamical properties. In particular, we assess the respective advantages and limits of synchronous versus asynchronous updating assumptions to delineate the asymptotical behaviour of regulatory networks. Furthermore, we propose several intermediate strategies to optimize the computation of asymptotical properties depending on available knowledge. The mammalian cell cycle model is available in a dedicated XML format (GINML) on our website, along with our logical simulation software GINsim (http://gin.univ-mrs.fr/GINsim). Higher resolution state transitions graphs are also found on this web site (Model Repository page).

This article was submitted to Systems Biology, a section of the journal Frontiers in Physiology