Prefrontal Control and Internet Addiction: A Theoretical Model and Review of Neuropsychological and Neuroimaging Findings 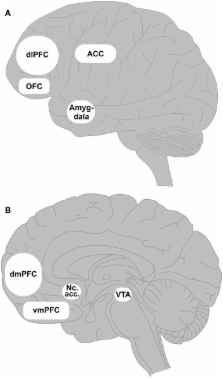 Most people use the Internet as a functional tool to perform their personal goals in everyday-life such as making airline or hotel reservations. However, some individuals suffer from a loss of control over their Internet use resulting in personal distress, symptoms of psychological dependence, and diverse negative consequences. This phenomenon is often referred to as Internet addiction. Only Internet Gaming Disorder has been included in the appendix of the DSM-5, but it has already been argued that Internet addiction could also comprise problematic use of other applications with cybersex, online relations, shopping, and information search being Internet facets at risk for developing an addictive behavior. Neuropsychological investigations have pointed out that certain prefrontal functions in particular executive control functions are related to symptoms of Internet addiction, which is in line with recent theoretical models on the development and maintenance of the addictive use of the Internet. Control processes are particularly reduced when individuals with Internet addiction are confronted with Internet-related cues representing their first choice use. For example, processing Internet-related cues interferes with working memory performance and decision making. Consistent with this, results from functional neuroimaging and other neuropsychological studies demonstrate that cue-reactivity, craving, and decision making are important concepts for understanding Internet addiction. The findings on reductions in executive control are consistent with other behavioral addictions, such as pathological gambling. They also emphasize the classification of the phenomenon as an addiction, because there are also several similarities with findings in substance dependency. The neuropsychological and neuroimaging results have important clinical impact, as one therapy goal should enhance control over the Internet use by modifying specific cognitions and Internet use expectancies.

Internet Addiction: The Emergence of a New Clinical Disorder

Matthew Botvinick,  Jonathan D. Cohen,  Cameron S. Carter (2004)
One hypothesis concerning the human dorsal anterior cingulate cortex (ACC) is that it functions, in part, to signal the occurrence of conflicts in information processing, thereby triggering compensatory adjustments in cognitive control. Since this idea was first proposed, a great deal of relevant empirical evidence has accrued. This evidence has largely corroborated the conflict-monitoring hypothesis, and some very recent work has provided striking new support for the theory. At the same time, other findings have posed specific challenges, especially concerning the way the theory addresses the processing of errors. Recent research has also begun to shed light on the larger function of the ACC, suggesting some new possibilities concerning how conflict monitoring might fit into the cingulate's overall role in cognition and action.

Neural systems of reinforcement for drug addiction: from actions to habits to compulsion.

Barry Everitt,  Trevor W. Robbins (2005)
Drug addiction is increasingly viewed as the endpoint of a series of transitions from initial drug use--when a drug is voluntarily taken because it has reinforcing, often hedonic, effects--through loss of control over this behavior, such that it becomes habitual and ultimately compulsive. Here we discuss evidence that these transitions depend on interactions between pavlovian and instrumental learning processes. We hypothesize that the change from voluntary drug use to more habitual and compulsive drug use represents a transition at the neural level from prefrontal cortical to striatal control over drug seeking and drug taking behavior as well as a progression from ventral to more dorsal domains of the striatum, involving its dopaminergic innervation. These neural transitions may themselves depend on the neuroplasticity in both cortical and striatal structures that is induced by chronic self-administration of drugs.