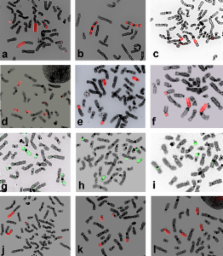 The taxonomic and phylogenetic relationships of New World monkeys (Platyrrhini) are difficult to distinguish on the basis of morphology and because diagnostic fossils are rare. Recently, molecular data have led to a radical revision of the traditional taxonomy and phylogeny of these primates. Here we examine new hypotheses of platyrrhine evolutionary relationships by reciprocal chromosome painting after chromosome flow sorting of species belonging to four genera of platyrrhines included in the Cebidae family: Callithrix argentata (silvered-marmoset), Cebuella pygmaea (pygmy marmoset), Callimico goeldii (Goeldi's marmoset) and Saimiri sciureus (squirrel monkey). This is the first report of reciprocal painting in marmosets.

The reciprocal painting results support the molecular genomic assemblage of Cebidae. We demonstrated that the five chromosome associations previously hypothesized to phylogenetically link tamarins and marmosets are homologous and represent derived chromosome rearrangements. Four of these derived homologous associations tightly nest Callimico goeldii with marmosets. One derived association 2/15 may place squirrel monkeys within the Cebidae assemblage. An apparently common breakpoint on chromosome 5q33 found in both Saimiri and Aotus nancymae could be evidence of a phylogenetic link between these species. Comparison with previous reports shows that many syntenic associations found in platyrrhines have the same breakpoints and are homologous, derived rearrangements showing that the New World monkeys are a closely related group of species. Our data support the hypothesis that the ancestral karyotype of the Platyrrhini has a diploid number of 2n = 54 and is almost identical to that found today in capuchin monkeys; congruent with a basal position of the Cebidae among platyrrhine families.

E Eizirik,  Michael J. Stanhope,  Ciara O'Brien … (2001)
Molecular phylogenetic studies have resolved placental mammals into four major groups, but have not established the full hierarchy of interordinal relationships, including the position of the root. The latter is critical for understanding the early biogeographic history of placentals. We investigated placental phylogeny using Bayesian and maximum-likelihood methods and a 16.4-kilobase molecular data set. Interordinal relationships are almost entirely resolved. The basal split is between Afrotheria and other placentals, at about 103 million years, and may be accounted for by the separation of South America and Africa in the Cretaceous. Crown-group Eutheria may have their most recent common ancestry in the Southern Hemisphere (Gondwana).

Andrew Murphy,  Ciara O'Brien,  Charles Springer … (2003)
Competing hypotheses for the timing of the placental mammal radiation focus on whether extant placental orders originated and diversified before or after the Cretaceous-Tertiary (KT) boundary. Molecular studies that have addressed this issue suffer from single calibration points, unwarranted assumptions about the molecular clock, andor taxon sampling that lacks representatives of all placental orders. We investigated this problem using the largest available molecular data set for placental mammals, which includes segments of 19 nuclear and three mitochondrial genes for representatives of all extant placental orders. We used the ThorneKishino method, which permits simultaneous constraints from the fossil record and allows rates of molecular evolution to vary on different branches of a phylogenetic tree. Analyses that used different sets of fossil constraints, different priors for the base of Placentalia, and different data partitions all support interordinal divergences in the Cretaceous followed by intraordinal diversification mostly after the KT boundary. Four placental orders show intraordinal diversification that predates the KT boundary, but only by an average of 10 million years. In contrast to some molecular studies that date the rat-mouse split as old as 46 million years, our results show improved agreement with the fossil record and place this split at 16-23 million years. To test the hypothesis that molecular estimates of Cretaceous divergence times are an artifact of increased body size subsequent to the KT boundary, we also performed analyses with a "KT body size" taxon set. In these analyses, interordinal splits remained in the Cretaceous.

Estimation of divergence times for major lineages of primate species.

G Glazko (2003)
Although the phylogenetic relationships of major lineages of primate species are relatively well established, the times of divergence of these lineages as estimated by molecular data are still controversial. This controversy has been generated in part because different authors have used different types of molecular data, different statistical methods, and different calibration points. We have therefore examined the effects of these factors on the estimates of divergence times and reached the following conclusions: (1) It is advisable to concatenate many gene sequences and use a multigene gamma distance for estimating divergence times rather than using the individual gene approach. (2) When sequence data from many nuclear genes are available, protein sequences appear to give more robust estimates than DNA sequences. (3) Nuclear proteins are generally more suitable than mitochondrial proteins for time estimation. (4) It is important first to construct a phylogenetic tree for a group of species using some outgroups and then estimate the branch lengths. (5) It appears to be better to use a few reliable calibration points rather than many unreliable ones. Considering all these factors and using two calibration points, we estimated that the human lineage diverged from the chimpanzee, gorilla, orangutan, Old World monkey, and New World monkey lineages approximately 6 MYA (with a range of 5-7), 7 MYA (range, 6-8), 13 MYA (range, 12-15), 23 MYA (range, 21-25), and 33 MYA (range 32-36).