Critical Importance of Long-Term Adherence to Care in HIV Infected Patients in the cART Era: New Insights from Pneumocystis jirovecii Pneumonia Cases over 2004–2011 in the FHDH-ANRS CO4 Cohort 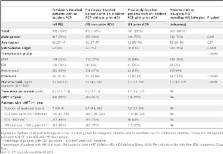 To describe characteristics and outcomes of HIV-infected patients with Pneumocystis jirovecii pneumonia (PCP) over 2004–2011 in France, in particular in those previously enrolled (PE) in the French Hospital Database on HIV (FHDH).

PE patients with an incident PCP were compared with patients with an inaugural PCP revealing HIV infection (reference). Adequate adherence to care was defined as a CD4 measurement at least every 6 months. Immune reconstitution (CD4≥200/mm 3) and risk of death were studied using Kaplan-Meier estimates and multivariable Cox proportional hazards models.

In a context of a decreasing incidence of PCP, 1259 HIV-infected patients had a PCP diagnosis, and 593 (47%) were PE patients of whom 161 (27%) have had a prior history of AIDS-defining clinical illness (prior ADI). Median time since enrolment was 8 years for PE patients; 74% had received cART. Median proportion of time with adequate adherence to care was 85% (IQR, 66–96) for all FHDH enrollees, but only 45% (IQR, 1–81) for PE patients during the 2 years before PCP. Median CD4 cell count (38/mm 3) and HIV viral load (5.2 log10 copies/ml) at PCP diagnosis did not differ between PE patients and the reference group. Three year mortality rate of 25% was observed for PE prior ADI group, higher than in PE non-prior ADI group (8%) and the reference group (9%) (p<0.0001). In the PE prior ADI group, poor prognosis remained even after adjustment for virological control and immune reconstitution (HR, 2.4 [95%CI, 1.5–3.7]).

Almost 50% of PCP diagnoses in HIV-infected patients occurred presently in patients already in care, mainly with a previous cART prescription but with waning adherence to care. Having repeated ADI is contributing to the risk of death beyond its impact on immune reconstitution and viral suppression: special efforts must be undertaken to maintain those patients in care.

Epidemiology of human immunodeficiency virus-associated opportunistic infections in the United States in the era of highly active antiretroviral therapy.

Helen Jones,  Andrew Hanson,  M L Lindegren … (2000)
The incidence of nearly all AIDS-defining opportunistic infections (OIs) decreased significantly in the United States during 1992-1998; decreases in the most common OIs (Pneumocystis carinii pneumonia ¿PCP, esophageal candidiasis, and disseminated Mycobacterium avium complex ¿MAC disease) were more pronounced in 1996-1998, during which time highly active antiretroviral therapy (HAART) was introduced into medical care. Those OIs that continue to occur do so at low CD4+ T lymphocyte counts, and persons whose CD4+ counts have increased in response to HAART are at low risk for OIs, a circumstance that suggests a high degree of immune reconstitution associated with HAART. PCP, the most common serious OI, continues to occur primarily in persons not previously receiving medical care. The most profound effect on survival of patients with AIDS is conferred by HAART, but specific OI prevention measures (prophylaxis against PCP and MAC and vaccination against Streptococcus pneumoniae) are associated with a survival benefit, even when they coincide with the administration of HAART. Continued monitoring of incidence trends and detection of new syndromes associated with HAART are important priorities in the HAART era.

This work was supported by the Agence Nationale de Recherche sur le SIDA et les hépatites virales (ANRS, France). The funder had no role in study design, data collection and analysis, decision to publish, or preparation of the manuscript.