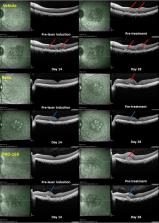 To evaluate the efficacy of a therapy on improving characteristics of laser-induced choroidal neovascularization (CNV) via single intravitreal injection of a humanized anti-human VEGF monoclonal antibody (PRO-169) versus bevacizumab in a rhesus monkey model.

To induce experimental CNV, small high-energy laser spots were used to treat several areas, around the macula in the retinas of monkeys at Day −21. Eighteen rhesus monkeys were used for CNV induction. The efficacy endpoints were fluorescein leakage by FFA and retinal thickness by OCT. FFA examinations were performed 19 days after induction. Appropriate animals were enrolled for treatment and randomly divided into 3 groups: bevacizumab (n=5, 7 eyes), PRO-169 (n=5, 7 eyes), and vehicle controls (n=4, 7 eyes).

After photocoagulation, the eyes enrolled in this studio showed CNV related characteristics including increased retinal thickness, and fluorescein leakage at laser spots. PRO-169 (1.25 mg per eye) can reduce the retinal thickness and fluorescein leakage area after treatment for 14 and 28 days in this rhesus monkeys model, without toxic effect or adverse events. These findings suggested that PRO-169 can inhibit CNV.

Gui-Shuang Ying,  Maureen Maguire,  Daniel Martin … (2011)
Clinical trials have established the efficacy of ranibizumab for the treatment of neovascular age-related macular degeneration (AMD). In addition, bevacizumab is used off-label to treat AMD, despite the absence of similar supporting data. In a multicenter, single-blind, noninferiority trial, we randomly assigned 1208 patients with neovascular AMD to receive intravitreal injections of ranibizumab or bevacizumab on either a monthly schedule or as needed with monthly evaluation. The primary outcome was the mean change in visual acuity at 1 year, with a noninferiority limit of 5 letters on the eye chart. Bevacizumab administered monthly was equivalent to ranibizumab administered monthly, with 8.0 and 8.5 letters gained, respectively. Bevacizumab administered as needed was equivalent to ranibizumab as needed, with 5.9 and 6.8 letters gained, respectively. Ranibizumab as needed was equivalent to monthly ranibizumab, although the comparison between bevacizumab as needed and monthly bevacizumab was inconclusive. The mean decrease in central retinal thickness was greater in the ranibizumab-monthly group (196 μm) than in the other groups (152 to 168 μm, P=0.03 by analysis of variance). Rates of death, myocardial infarction, and stroke were similar for patients receiving either bevacizumab or ranibizumab (P>0.20). The proportion of patients with serious systemic adverse events (primarily hospitalizations) was higher with bevacizumab than with ranibizumab (24.1% vs. 19.0%; risk ratio, 1.29; 95% confidence interval, 1.01 to 1.66), with excess events broadly distributed in disease categories not identified in previous studies as areas of concern. At 1 year, bevacizumab and ranibizumab had equivalent effects on visual acuity when administered according to the same schedule. Ranibizumab given as needed with monthly evaluation had effects on vision that were equivalent to those of ranibizumab administered monthly. Differences in rates of serious adverse events require further study. (Funded by the National Eye Institute; ClinicalTrials.gov number, NCT00593450.).

Harold Dvorak,  Tara L. Brown,  J Folkman … (1994)
Ischemia often precedes neovascularization. In ocular neovascularization, such as occurs in diabetic retinopathy, a diffusible angiogenic factor has been postulated to be produced by ischemic retina and to lead to neovascularization of the retina, optic nerve, or iris. However, no angiogenic factor has been conclusively identified that satisfies this hypothesis. Vascular endothelial growth factor/vascular permeability factor, hereafter referred to as VEGF, is a likely candidate for an ocular angiogenic factor because it is a secreted mitogen, specific for endothelial cells, and is upregulated by hypoxia. We investigated the association of VEGF with the development of experimental iris neovascularization in the cynomolgus monkey. Following the production of retinal ischemia by laser occlusion of all branch retinal veins, VEGF was increased in the aqueous fluid, and the aqueous VEGF levels changed synchronously and proportionally with the severity of iris neovascularization. Northern analysis and in situ hybridization revealed that VEGF messenger RNA is upregulated in the ischemic retina. These observations support the hypothesis that ocular neovascularization is regulated by a diffusible factor and identify VEGF as a likely candidate for a retina-derived vascular permeability and angiogenesis factor in vivo.

Penetration of bevacizumab through the retina after intravitreal injection in the monkey.

Focke Ziemssen,  Sigrid Schultheiss,  Ulrich Schraermeyer … (2007)
The penetration of intravitreally injected bevacizumab in its commercial formulation (Avastin; Roche, Grenzach, Germany) through the retina was studied, to determine whether a full-length antibody would be able to penetrate the retina as easily as an antibody fragment. Six cynomolgus monkeys (Macaca fascicularis) were used in this study. Two compositions of intravitreal injection into the right eyes were performed: one with commercial Avastin (group 1, four animals) and the other one with commercial Avastin labeled with 125I (group 2, one animal). The animals in group 1 were killed 1, 4, 7, or 14 days after the injection for subsequent histologic analysis of the eyes by immunohistochemistry, and the animal in group 2 was killed 7 days after injection for autoradiography and electron microscopy. Funduscopy was performed before the injection and at several time points thereafter. Moreover, blood samples were collected at different time points from the group-2 animal. The sixth animal remained untreated and served as the control. No pathologic changes were obvious in the funduscopic images within the time of the experiment. Bevacizumab immunoreactivity was found in the choroid and the inner layers of the retina as early as 1 day after the injection and spread to the outer layers and the choroid within the following days, in particular to photoreceptors and blood vessels. Avastin labeled with 125I showed radioactivity in blood serum 1 day after the intravitreal injection and remained relatively stable until day 7. The results clearly show that the bevacizumab molecule can penetrate the retina and is also transported into the retinal pigment epithelium, the choroid and, in particular, into photoreceptor outer segments after intravitreal injection of Avastin. Active transport mechanisms seem to be involved.